Join this campaign to cost the Woke NBA millions of dollars for enforcing Red Chinese censorship. 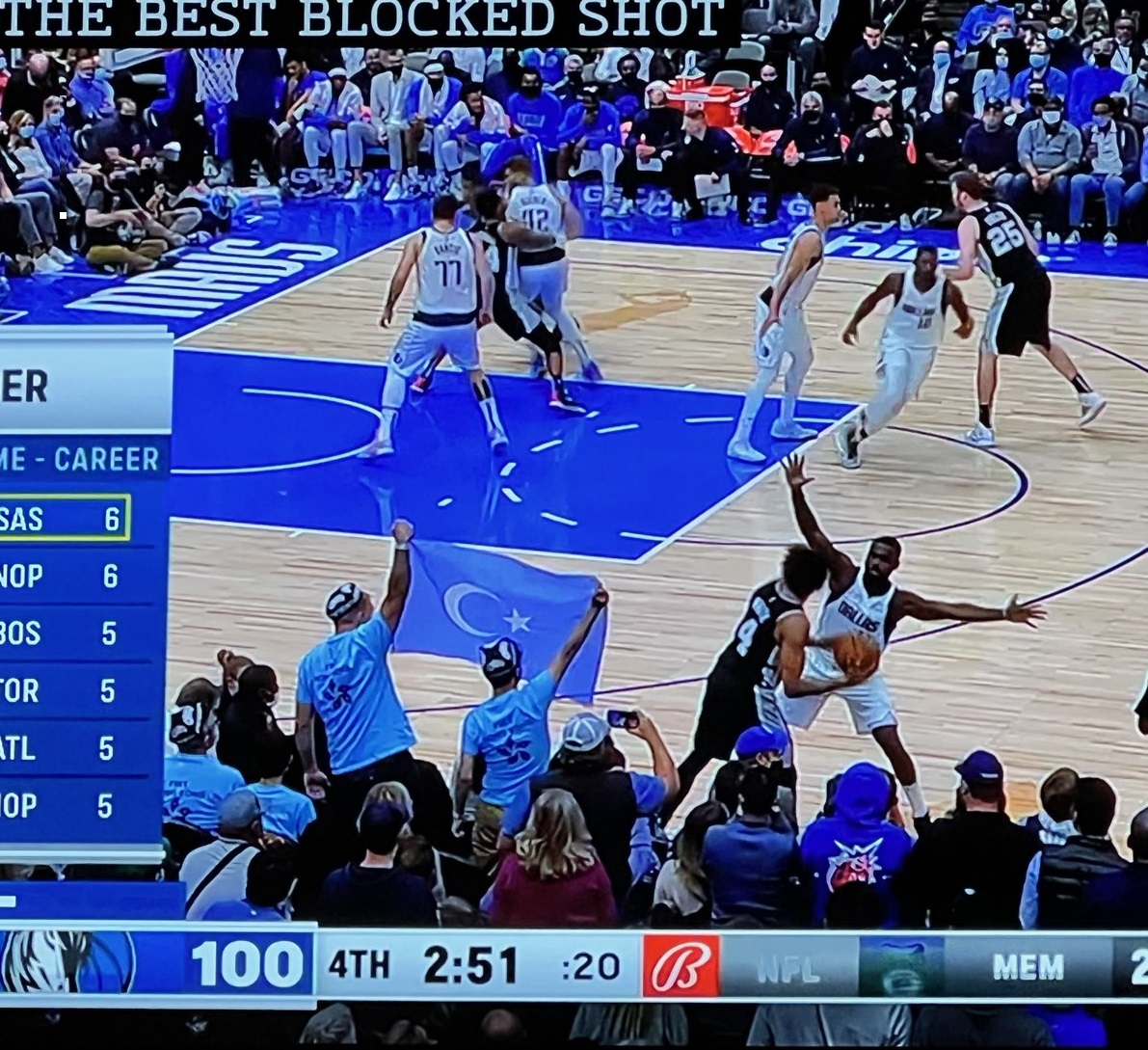 At a recent gathering of conservative academics and intellectuals, the Philadelphia Society, I heard from multiple people some deeply disturbing news. The censorship of electronic media has gone beyond social media platforms. Several attendees reported that their personal emails to friends were getting blocked, based on their political content. It sounded crazy to me. I couldn’t imagine how any company could justify that.

Was it the FBI? The NBA? Or Just Straight-Up Red China?

I was planning to interview Stream contributor Jason Jones about a recent piece of human rights trolling he engaged in, with exiled Uyghur Prime Minister Salih Hudayar. So I emailed them both the questions. But Jason’s answers didn’t come back to me. So I phoned him. He reported that his email server had been rejecting all his messages on certain subjects, and refusing to send out the photos appearing with this column.

Was it just a bug? No, it was a feature, his service informed him:

The response from the remote server was:
554 rejecting banned content

What Was Google So Scared Of?

Doesn’t that act of blatant censorship of legal, peaceful free speech make you wonder what Google was trying to silence? It’s the interview below.

John Zmirak: You are the elected Prime Minister of East Turkistan, occupied by the People’s
Republic of China. What are your key grievances against that government, for those who
haven’t been keeping up?

Salih Hudayar: The Chinese government invaded and occupied East Turkistan in 1949. Since then, the Chinese government has been engaged in colonization in an effort to maintain its control. According to the U.S. Department of Defense, China has locked up at least 3 million Uyghurs, Kazakhs, Kyrgyz and other Turkic peoples into concentration camps and prisons. Uyghurs/Turkic peoples have been subject to forced indoctrination, torture, mass rape and sexual abuse, sterilization, organ harvesting, and even execution. The U.S. Government, under the Trump Administration, officially recognized China’s actions in East Turkistan as genocide. That was followed by further recognition from numerous Parliaments in Canada, UK, and the EU.

John Zmirak: What does this have to do with the NBA? Why did you go to a Dallas Mavericks game to protest?

Salih Hudayar: Nike is the NBA’s key supplier for on-court apparel. Nike itself is one of 83 major global brands that is complicit in China’s ongoing forced/slave labor of Uyghurs. In a way, both Nike and the NBA are complicit and profiting from China’s forced/slave labor of Uyghurs and turning a blind eye to China’s ongoing genocide in East Turkistan. The Dallas Mavericks is owned by Mike Cuban. He refused to condemn China’s genocide in East Turkistan. He even stated: “They are a customer of ours, and guess what, Megan? I’m okay with doing business with China” in an interview with the Megyn Kelly Show. 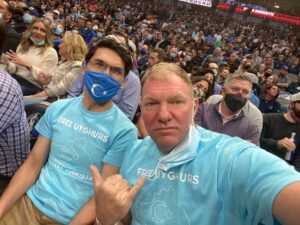 Jason Jones: NBA executives and team owners behave as subjects of the Chinese Communist Party. They choose to subordinate free speech to profit. They have turned their backs on the Uyghurs in Chinese occupied East Turkistan. But also on the people of Hong Kong, Tibet, and Taiwan. Last year, the NBA banned customized jerseys that said “Free Hong Kong.” But you could order jerseys that said “Heil Hitler” or “F**k the Police.”

U.S. Companies Are Woke at Home, Slaveowners in China

John Zmirak: Are the NBA’s and Nike’s Woke stances in the U.S. a distraction from their cooperation with tyranny in China?

Jason Jones: It all comes down to money. How absurd to see the billionaire owners applauding their millionaire players taking a knee during our National Anthem to protest racism. Meanwhile, they’re wearing jerseys made from cotton picked by Uyghur slaves. It is Victimism plain and simple. Feigning concern for “vulnerable communities” when it helps the bottom line. But forbidding fans from speaking up for the Uyghurs. That is, a people suffering a terrible genocide. A people enslaved, forced to pick cotton and manufacture shoes for Nike’s suppliers. A people being ethnically cleansed by the NBA’s business partner Xi Jinping. If the NBA and Nike do not self-correct and follow the lead of heroes like the Boston Celtics Enes Kanter, the league will be mortally damaged. Similarly, if the Beijing Olympics take place, it will be so damaging in the long run to the brand of the Olympics, the Beijing games may be the last ones.

How Can Sports Fans Fight Back?

John Zmirak: How are you trying to pressure the NBA and Nike to do the right thing?

Jason Jones: After Enes Kanter spoke out in support of the Uyghur and the Free Tibet movement, the CCP announced it would be blocking all Celtics games. That’s when I got the idea of filling NBA stadiums with fans holding flags and signs in support of those people being brutally repressed by China. Let’s force a total NBA blackout in China. And push the NBA to break its business relationship with the CCP. Let’s force Nike to move its production facilities from China. Let’s stand with Enes Kanter. If we fail to stand with heroic athletes like Kanter, they become easy targets for the NBA, powerful brands like Nike, and China.

John Zmirak: You protested recently at a Dallas Mavericks game. What happened?

John Zmirak: How did Security react?

Jason Jones: When we took off our overshirts to reveal our Free Uyghurs t-shirts, they immediately had eyes on us. A season ticket holder sitting next to us asked us who we were and why Security kept such a close eye on us. In the 3rd quarter, I said a prayer: “Lord; we need a foul right in front of us.” Two seconds later there was a foul, and we took our chance. As the players lined up feet in front of us, Prime Minister Hudayar and I stood up, holding the large flag for all the world to see. Security asked us to put the flag away. We made it clear that wouldn’t be happening. So a member of the security team began reaching for the flag. I told him, “A photograph of an NBA employee ripping a flag out of a Uyghur’s hand would probably not be a smart move.” He let the flag go and stomped off. He came back a minute later and began to film us. I told him that we actually came to the game to get our message on film.

John Zmirak: How did ordinary basketball fans around you react?

Jason Jones: What was most surprising was how supportive the fans were. People kept thanking us. When security began to confront us fans began to shout, “Free the Uyghurs!” One guy shouted, “give me the flag when they arrest you, and I’ll run across the court waving it!

The Long Arm of Red China, and Woke Capital

John Zmirak: Did you feel as if the totalitarian regime in China were reaching its hand all the way into Texas?

Salih Hudayar: Absolutely. The Chinese government has managed to effectively buy the silence and complicity of companies, governments, and media, in all parts of the world. The fact that we were being harassed by Mavericks Security telling us we couldn’t have “that specific flag” was a very clear indication of this.

John Zmirak: The Uyghur people have an important holiday coming up, right?

Jason Jones: We want to make this holiday special. We hope to have fans in every NBA stadium on November 12 showing signs of support for the victims of the CCP. T-shirts, banners, flags, whatever. Tell the world: “Free The Uyghurs,” “Free Tibet,” “Free Hong Kong.” You can make your own shirts or order from our website. Our goal is not to damage the bottom line of the NBA, per se. It’s to put an end to these horrific genocides. To free the Uyghur, to free Tibet, to free Hong Kong, to free the people of China from the CCP. To liberate our economy from this brutal totalitarian dictatorship. Our homes have become crime scenes. If we were to run a blue light through our homes, we would see the blood of the Uyghur on our shoes, our computers our televisions. To free the Uyghur is to free the world.