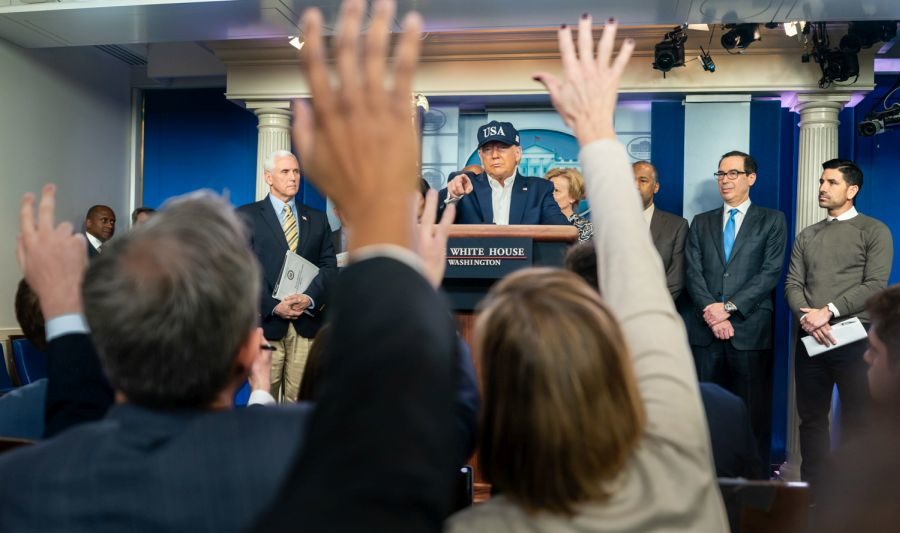 Watching the Coronavirus news over the past few days, I am reminded of Goofus and Gallant.

In the Highlights for Children magazine, Goofus acts improperly, while Gallant demonstrates the proper way to behave in a given situation.

Boy, have we seen some Goofuses! But thank God, we’re seeing some Gallants.

Megerian, along with other journalists, were outraged that President Trump wore one of his USA caps at the Saturday Coronavirus Task Force briefing. See, because people can purchase those hats at the Trump 2020 website. Because it’s horrific for the U.S. President to show support for the U.S.A. Because when you have TDS, Trump’s fashion accessorizing is more important than his working to protect the American people.

Trump is at the White House addressing a national emergency over a global pandemic while wearing a baseball hat you can buy on his campaign website. pic.twitter.com/ChCUMNmybv

Despite their nation being ravaged by the Coronavirus, and being under strict quarantine until April 3, the Italian people are singing. The assorted videos have gone viral around the world. In the good way.

A whole Roman neighborhood singing a popular Italian song “Volare” from their balconies and waving at each other. An amazing flash mob to lift the spirit in these crazy times ❤️ #Italy #coronavirus #forzaitalia #roma #flashmob #love pic.twitter.com/xjeZTeO0GO

And here’s the Italian national anthem.

Italian flash mob to show our unity. 6:15pm everyone out and play or sing. Here's the national anthem. I'm weeping.#unity #vivalitalia #covid_19italia pic.twitter.com/jgLbaRSPZs

For weeks, the media called the coronavirus the “Wuhan virus.” Then they decided, overnight, that if Trump or Republicans use the term it is racist or “xenophobic.”

Even more silly, after Twitter flooded with examples of MSM referring to the virus as the Wuhan Virus or Chinese Virus — and cited countless instances of diseases or outbreaks being designated by their place of origin — Politico doubled down on the charge that it is xenophobic.

A bonus Group Goofus to the reporters at Friday’s Rose Garden press conference. Any more snotty they’d have to be quarantined. They did nothing to dispel the notion that if given the choice between squashing Trump or squashing the virus, they’d pick Trump in a heartbeat.

However, as we fall into a daily routine of updates, and we deal with real death and illness, I am hopeful we will see more sobriety out of the media mob. I don’t expect it. But I can be hopeful.

Rookie Zion Williamson of New Orleans Pelicans has pledged to pay the salaries of all Smoothie King Center workers for the next month. The arena, of course, is shut down as the NBA season is put on hold. Here’s part of what Zion said on Instagram:

My mother has always set an example for me about being respectful for others and being grateful for what we have, and so today I am pledging to cover the salaries for all of those Smoothie King Center workers for the next 30 days. This is a small way for me to express my support and appreciation for these wonderful people who have been so great to me and my teammates and hopefully we can all join together to relieve some of the stress and hardship caused by this national health crisis.”

An honorary “Gallant” to all the other professional athletes who are also helping out during the sports league shutdowns.

Last week, AOC declared that avoiding eating at Chinese restaurants is “straight-up racism.” You know AOC. Never let facts or common sense get in the way of declaring somebody racist. After all, how on earth is it racist to say, “You know what, dear, maybe we should go for Indian tonight instead of Chinese”?

By week’s end, AOC recognized the danger of eating at restaurants. She also went onto Fox News and shared a respectful, informative interview with Brett Baier.

Have you seen this clip yet? A drunk Belgian on a train lowers his mask, sticks two fingers in his mouth and wipes them on a subway pole.

Yup, he is an incredible Goofus. In any language. However, if we do not follow proper hygiene practices and get careless with where we put our hands we’re no better. So this guy isn’t just a Goofus. He’s a reminder to us. Don’t be a Goofus!

According to White House officials, Nancy Pelosi attempted to sneak abortion funding into the Family First Coronavirus Relief Bill. The sneaky move was to try and allocate money that was not covered by the Hyde Amendment. The Hyde Amendment prohibits federal funding of abortions. Here’s a suggestion, Nancy. Maybe for the safety of all, Democrats should socially distance themselves from Planned Parenthood. That’s one guaranteed way to save lives.

Meanwhile, Pelosi does get a mini-Gallant for in the end negotiating a deal with Treasury Secretary Steven Mnuchin. The bill passed early Saturday morning and will be taken up this week by the Senate.

Gallant: Every Single Medical Worker on the Front Line of the Fight

And this includes those citizens who will be manning the drive-thru test areas at places like Wal-Mart and Walgreens. Also, those people who will be serving as cooks and food deliverers for the millions who will be ordering out from their favorite restaurants.

Finally, we return to Italy and opera singer Maurizio Marchini. Last week, he stepped onto his balcony and serenaded the entire town of Florence. Listen to “Nobody Shall Sleep.”

During Italy's quarantine, tenor and opera singer Maurizio Marchini wanted to give people hope and joy.

So he went to his balcony and serenaded the entire town of Florence.

The song is "Nobody Shall Sleep." and ends with “with the dawn, I will win.” pic.twitter.com/uF16buVkOL

We will get through the dark night of this pandemic. And come the dawn, we will win.

We’ll win quicker, of course, if each and every one of us is gallant in our efforts, and avoids being a goofus.