I'll never forget her words to me about her husband, or the brave couple's response to a historic evangelical gathering in Dallas. 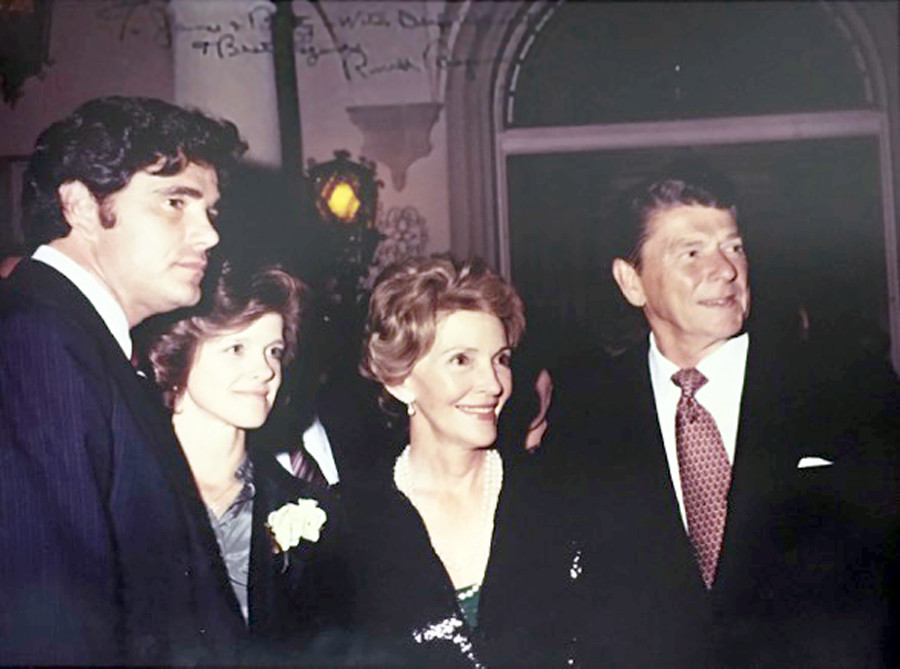 For those of us who witnessed what is often referred to favorably as “The Reagan Revolution,” we have a deep sense of loss with the passing of Nancy Reagan. My wife Betty commented throughout the 1980 presidential campaign, at the inauguration in January 1981 and during the eight years of Ronald Reagan’s presidency, “Look how she admires her man.” Indeed, it was obvious. It was almost like a first love glance each time he spoke when she was at his side.

Their mutual love and admiration was obvious to all observers. As we reflect on President Reagan’s final years in the long, lasting goodbye because of Alzheimer’s, it’s worth remembering, and honoring the fact that Nancy cared for him faithfully and guarded their precious memories.

The photo above of then Gov. Reagan and Nancy with Betty and me was a surprise gift at a time when there were no smart phones with cameras. It was signed by Gov. Reagan and sent to us from him. The occasion of the picture was so memorable because of the private discussion we had with the two of them about the serious Soviet threat and the U.S government’s misguided approach to answering it. Many church leaders, conservatives and even military leaders, knowing the Governor seemed to appreciate concerns I had shared with him, wanted me to press him about his resolve to stand against the great threats that Communism and the Soviet nuclear arsenal posed. I pressed during our time together, and he responded with such strong, immovable resolve that I was rocked with gratitude.

During our discussion, Mrs. Reagan looked straight in my eyes and announced that her Ron was the most courageous man on this planet and was fearless. Then she gave examples of him acting courageously in California politics. I have another picture of Gov. Reagan staring at Nancy in amazement at the fervor with which she described his courageous temperament. The expression on his face was one of surprise at the way she expressed her faith in him.

That’s a beautiful memory of Nancy and Ronald, but the greatest and most precious memory I have of Nancy came in August of 1980, the day after what proved to be a historic event known as the National Affairs Briefing in Dallas, attended by 17,000 Christians, including thousands of pastors, church and ministry leaders. Some media reported the gathering impacted over 40 million active voters.

God had placed the meeting on my heart earlier in the year, and when I told Gov. Reagan about the potential of the event, he saw the positive possibilities and that it was extremely important. However, he had by that time secured the Republican nomination in the presidential race, and most of his advisers — what some people referred to (and still do) as “the establishment” — were opposed to his participation.

Maybe these advisers thought it was time for Reagan, having secured the GOP nomination, to leave conservative Christians in his rearview mirror and make for some hypothetical secular middle of the political spectrum. Who knows what their motivation was, but as it turned out, they had as much effect preventing him from coming to the Dallas event as they did removing “Mr. Gorbachev, tear down this wall” from his speech in Germany in the shadow of the Berlin Wall. He did come to the Dallas briefing, and the Berlin wall did come down!

It was at the National Affairs Briefing that Reagan made the statement that became headlines nationwide and that many believe swung momentum strongly in his direction. When he stood to speak, he said, “I know this is a non-partisan event and you can’t endorse me. I only said that to say: I endorse you and what you stand for.” The place exploded with gratitude and approval.

During his speech, Gov. Reagan confirmed the importance of God, faith and our founders’ principles. It was electrifying to all who were present. And I am convinced that his leadership there and in the years to come helped extend the life of freedom here in America and around the world.

It was a memorable day, but my most memorable moment with the Reagans was not that day, but the next.

Governor Reagan called me from Rancho del Cielo (Heaven’s Ranch) in California the day after the briefing to express his gratitude for the impact it had on him and for what he felt from that faith-filled audience so concerned about America. “James, thank you,” he said with great energy. “Thank all of the pastors and leaders who led and participated. I was deeply moved, encouraged and inspired.”

He went on to ask for prayer for some specific challenges he faced as a candidate and for the future of our great nation. At one point in the conversation he apologized, saying, “Excuse me. I have to take a call for a few minutes. Nancy is standing by me asking if she can speak to you. I’ll be right back.”

Nancy Reagan came on the phone overflowing with joy and excitement. “James, in my 28 years with my husband, I have never seen Ronnie so excited. Never! He came in overflowing with indescribable joy and gratitude for what he was a part of. He said, ‘I have never seen such love and commitment. The place was filled with hope and obvious concern for our freedom.’ He loved hearing you preach, James. And he said, ‘Mommy, I was personally filled with hope for our nation and our nation’s future.’”

I treasure the fifteen minutes or so we visited on the phone, and that will forever be one of my most precious memories.

The governor did come back on the phone, asking if I could help create peace among not only the faith communities, but also conservative action groups, single-issue groups, and help them see challenges outside their own circle of concern. His hope was that the different groups would stand together and give him a chance to help correct our nation’s direction.

I agreed I would prayerfully seek to help bring together these groups that all too often work in their own separate worlds and at times even needlessly at odds with each other. And while I stayed out of politics for many years, and to this day resist endorsing any presidential candidate, I continue to encourage people to find common ground to address our shared concerns and uphold the principles that have made America, at its best, “a shining ‘city on a hill,’” as Reagan once described it, echoing an earlier American.

Join Betty and me in expressing our undying gratitude to President and Nancy Reagan for their wise and committed service to our country. During this memorial time for Mrs. Reagan, and by extension for her husband, I pray that we will be inspired by the memories many Americans will share of this remarkable couple, and that our children and their children will be recipients of what this couple dedicated themselves to defend — the great blessings of liberty.

If you would like to hear what President Reagan said at the National Affairs Briefing in 1980, here it is in it’s entirety:

This is a great example of how the faith community can impact a person of destiny and the future of our nation.

Should Christians Be Involved in Politics?

God Uses Flawed Vessels to Accomplish His Will

Is Donald Trump The Reason Positive Things are Happening in America?

James Robison and Dr. Michael Brown on the Roles of Government and the Church