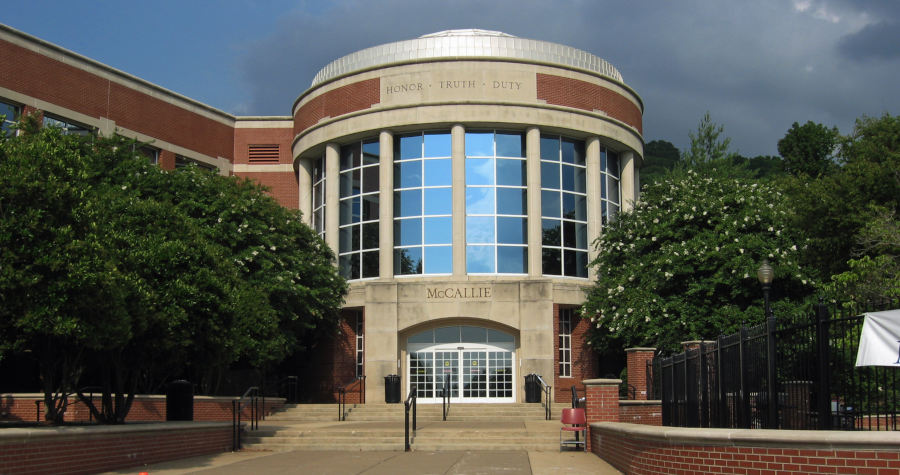 The front entrance of McCallie School, in Chattanooga, Tennessee.

I don’t always open mail from my old high school, but the upcoming reunion weekend caught my attention. I even considered taking the family to Chattanooga, TN, for the weekend’s festivities. I’ve long financially supported this self-described “Christian-based College Prep School.” Of course, this institution charging nearly $60,000 per year for boarding students and $30,000 for day students will survive without my paltry contributions. But, having attended this school on a needs-based scholarship I felt compelled to repay their generosity.

No more. And, I assure you I won’t be sending my biracial son there.

Among the schedule of events for the glorious reunion weekend featured this:

I wondered if it was a typo. Then I remembered it’s 2021 and “black” could only refer to one thing: skin pigmentation. Splashed across the brochure was indeed a racially segregated event.

We’re All Children of Adam

Apart from tiny, isolated populations on remote islands, all humans are of deeply mixed ancestry. As Niall Ferguson points out in his seminal work The War of the World, “It can plausibly be argued that ‘race’ is not a genetically meaningful concept … the question the historian must address is why it has nevertheless been such a violent preoccupation of modern times.”

People are all exactly alike. There’s no such thing as a race and barely such a thing as an ethnic group. If we were dogs, we’d be the same breed. George Bush and an Australian Aborigine have fewer differences than a Lhasa Apso and a Toy Fox Terrier. A Japanese raised in Riyadh would be an Arab. A Zulu raised in New Rochelle would be an orthodontist. People are all the same, though their circumstances differ terribly.

Nevertheless, this “Christian” school founded in 1905 by a Presbyterian minister seems to have forgotten what happens when you promote identity politics. It has forgotten the sinister eugenics of the first half of the 20th century. And yeah, the Civil Rights struggle that Rev. Martin Luther King, Jr., and Medgar Evers — to name a few — were martyred for.

Maybe I’ve left the known universe, but when last I checked, the Civil Rights Acts of 1964 and 1968 de-segregated American society.

There was a time – and not that long ago – that McCallie’s leadership would have bristled at the idea of a segregated event. The school was integrated in 1971 and several Presbyterian denominations actively supported the 1964 Civil Rights movement. Surely any trustee on the board or the headmaster, A. Lee Burns III himself, would have once considered promoting “separate but equal” abhorrent, retrograde, and un-Christlike. Maybe I’m old school but I was taught, “There is neither Jew nor Greek, there is neither slave nor free, there is neither male nor female; for you are all one in Christ Jesus.”

Perhaps the Apostle Paul should have written to the Galatians, “Mix not Jew and Greek. You are slaves to superficiality. Females preferred for they shalt boost our Diversity Equity Inclusion and Environmental Social Governance statistics and keepeth the bullseye off our back.”

The White Male Board Member’s Playbook

Let’s face it, we can reduce the whole woke thing to predominantly older, white males trying desperately to hold onto their power and position. Think about it: if I run an organization and I’m accused of white privilege, the safest way to keep the heat off my pale, straight un-diverse anatomy is three simple steps:

I get it. It’s scary to think you might lose your job. Many of us hoi polloi who use our hands as well as our heads lost our jobs due to government responses to COVID. The only way the Zoom class is at risk is if they get cancelled by so-called progressives.

In October 2020, McCallie quickly covered its posterior by tapping black men for its lily-white Board of Trustees and ostentatiously employed BLM-inspired language. Just read this:

Following from the board policy statement, the school has the responsibility to develop the specific action steps that help the school realize a more diverse and inclusive school community and culture … focused on racial equity and justice; on inclusion, particularly as it relates to identity and sexual orientation.

Their cookie cutter statement no doubt cribbed from New England universities reminds me of how The Telegraph described corporate management-speak: “Panglossian balderdash designed to lull the weak and credulous — the feeble-minded, the nice — into a position of supine docility.”

Welcome to the Machine

Imagine you’re a well-meaning black guy or Hispanic woman thrust into a position of power primarily because of a visible ethnic association. What’s it like when you walk into a mahogany wainscoted board room for the first time and it’s a bunch of white dudes in Brooks Brothers with Cheshire cat smiles condescendingly applauding you for joining their fraternity and their newly found woke religion? “Welcome, welcome! We’re just soooo happy that you’re here. Enjoy the salmon mouse canapés and soon Karen from our communications department is going to take your headshot for our website’s landing page!”

McCallie’s motto is (for now anyway until it’s deemed a microaggression), “To glorify God and enjoy him forever.” Can you believe the 1647 Westminster Shorter Catechism where this comes from had the audacity to use gender specific language?

If McCallie wants to engage in political activism all of a sudden, why is it silent on infanticide? Where’s the Board of Trustees policy statement on the tragic destruction of 20 million unborn black babies since 1973’s Roe? Oh, okay. That would be counter-cultural … and these people lack the backbone for that.

In the 4th century, Abba Anthony predicted, “A time is coming when men will go mad, and when they see someone who is not mad, they will attack him, saying, ‘You are mad; you are not like us.’”

Rev. John MacArthur reminds us to worry more about being holy than popular. If a secular institution were engaging in this Panglossian balderdash I’d feel no compunction to hold them to account. In this case though, when my ostensibly Christian brothers at McCallie are going to engage in toxic identity politics? I forgive you bro, but don’t call or email me anymore.

The school’s leaders may believe they’ve got the political wind at their backs. But I’ve got news for those old boys: At least half the country disagrees with you. As Edmund Burke reminded us:

Because half a dozen grasshoppers under a fern make the field ring with their importunate chink, whilst thousands of great cattle, reposed beneath the shadow of the British oak, chew the cud and are silent, pray do not imagine that those who make the noise are the only inhabitants of the field.

After over a century of holding forth Christian education as its central mission by caring more about the hereafter than the here, this prep school has gone with the wind. When their development office calls me for money, I’ll channel Rhett Butler’s character replying, “Frankly, my dear, I don’t give a damn.”

Elijah Schaefer is the pen name of an investor and philanthropist.