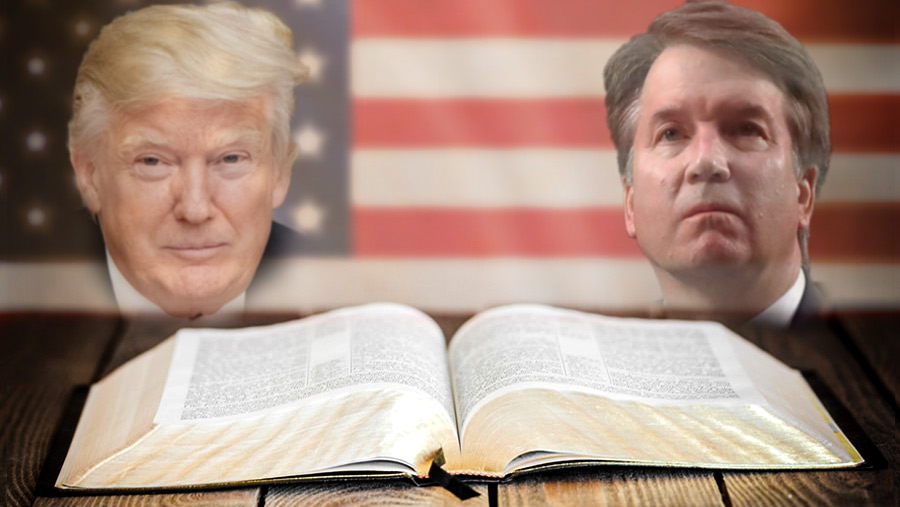 Throughout history, God has spoken clearly through yielded vessels, including the Old Testament prophets.

Isaiah sounded a clear note on the trumpet. God’s ear is not so dull, he said, “that it cannot hear. But your iniquities have made a separation between you and your God, and your sins have hidden His face from you so that He does not hear. For your hands are defiled with blood. … Their feet run to evil, and they hasten to shed innocent blood.” (Isaiah 59:1-3, 7)

We see this in our own day, as we watch the Judge Kavanaugh hearings and reflect on other current trends. Jennifer Hartline, a regular contributor to The Stream, is exactly right: It’s not about Kavanaugh. It’s about Roe. It’s about a woman’s “right” to take the life of the most innocent and helpless soul: a baby in the womb.

As a result of this absolute, undeniable wickedness, we witness unparalleled hatred, violence and continual threats against anyone who magnifies and clarifies the importance of every precious life.

The only way we stop the horrific practice of abortion is to change hearts and minds, so men and women understand the preciousness of every life.

The laws as they stand today could have prevented me from being born. But as we seek to correct our legal system, we must push harder to correct wrong thinking. The only way we stop the horrific practice of abortion is to change hearts and minds, so men and women understand the preciousness and unlimited potential of every life, including those in the womb.

Consider the deception and slander prevalent in our nation today. It’s the very thing that caused Jeremiah to cry out, “Oh that my head were waters and my eyes a fountain of tears, that I might weep day and night for the slain of the daughter of my people!” (Jeremiah 9:1)

The prophet’s heart was broken, and I understand as I weep with him. Look at the situation as Jeremiah described it:

“They bend their tongue like their bow; lies and not truth prevail in the land … They do not know Me,” declares the Lord. “Let everyone be on guard against his neighbor, and do not trust any brother … Everyone deceives his neighbor and does not speak the truth, they have taught their tongue to speak lies; they weary themselves committing iniquity. Your dwelling is in the midst of deceit; through deceit they refuse to know Me … Their tongue is a deadly arrow … With his mouth one speaks peace to his neighbor, but inwardly he sets an ambush for him.” (Jeremiah 9:3-6, 8)

The media misrepresentation we’re witnessing is what the president refers to as “fake news.” But it is worse than fake — it is outright manipulation and deception that leads to the destruction of freedom.

An Army of Judgment

It’s very important for all Christians to understand the significant message of another prophet: Joel. He described the nature of the enemy that seeks to destroy the productivity and fruitfulness of every individual and the potential of every nation to be blessed.

Joel likens it to a pestilence that comes as locusts to invade the land. “Its teeth are the teeth of a lion, and it has the fangs of a lioness. It has made my vine a waste and my fig tree splinters. It has stripped them bare and cast them away; their branches have become white.” (Joel 1:6-7)

He calls this horde of destruction a fire that “consumes before them, and behind them, a flame burns.” He goes on to tell the people of Judah:

The land is like a garden of Eden before them but a desolate wilderness behind them, and nothing at all escapes them … Like the crackling of a flame of fire consuming the stubble, like a mighty people arranged for battle … They run like mighty men, they climb the wall like soldiers; and they each march in line, nor do they deviate from their paths. They do not crowd each other, they march everyone in his path; when they burst through the defenses, they do not break ranks. They rush on the city, they run on the wall; they climb into the houses, they enter through the windows like a thief.” (Joel 2:3, 5, 7-9, emphasis added)

The enemy is a thief. And Joel described this as an army of judgment that the Lord God allows to come on a nation and a people who refuse to live according to His Word and instead choose to live outside of the shelter and shadow of the Almighty. When we live outside that covering, we are vulnerable to all manner of assault from the enemy and from evil.

‘Return to Me With All Your Heart’

God’s message to the people of Judah is relevant to the church today: “Return to Me with all your heart, and with fasting, weeping and mourning.” (Joel 2:12)

Joel admonished the people to return to God,

for He is gracious and compassionate, slow to anger, abounding in lovingkindness … Blow a trumpet in Zion, consecrate a fast, proclaim a solemn assembly, gather the people, sanctify the congregation, assemble the elders, gather the children and the nursing infants. Let the bridegroom come out of his room and the bride out of her bridal chamber. (Joel 2:13, 15-16)

God indicates that He will hear our prayer and that we will no longer need to live in fear of “the beasts of the field.” Why?

For the pastures of the wilderness have turned green, for the tree has borne its fruit, the fig tree and the vine have yielded in full. So rejoice, O sons of Zion, and be glad in the Lord your God; for He has given you the early rain for your vindication. And He has poured down for you the rain, the early and latter rain as before. The threshing floors will be full of grain, and the vats will overflow with the new wine and oil. Then I will make up to you for the years that the swarming locust has eaten, the creeping locust, the stripping locust and the gnawing locust, My great army which I sent among you. (Joel 2:22-25, emphasis added)

In other words, God will make up for all that the army of judgment plundered when we moved outside the hedge of protection that only God’s Word provides. We have allowed this enemy to rush on the walls. In many instances, we foolishly refused to even have walls of protection.

We find ourselves like Joel. The Word of God, which has been a hedge of protection, has been ignored and cast aside. We’re vulnerable to the intention of the enemy. But God says if we will return to Him with all of our hearts, He will make up for the damage that has been done.

Here is the promise — and every person, every leader, our president, every member of Congress, every agency head, every pastor and priest, and the leaders of every family, should accept and rejoice in it.

“Therefore,” thus says the Lord, “If you return, then I will restore you — before Me you will stand; and if you extract the precious from the worthless [do that, Mr. President; do that, Congressmen; do that, leaders], you will become My spokesman. They for their part may turn to you [and I believe the majority will], but as for you, you must not turn to them. [Do not go back to the ways proven to fail.] Then I will make you to this people a fortified wall of bronze; and though they fight against you, they will not prevail over you; for I am with you to save you and deliver you,” declares the Lord. (Jeremiah 15:19-20).

We have seen this and witnessed it firsthand with the present President of the United States — because of prevailing prayer for God’s will to be done.

In numerous conversations over the last two years, Donald Trump has told me emphatically that this is what he wants. To be “surrounded” with “prayer and wisdom.” When I listened to him on Tuesday speaking to the United Nations and saw that camera shot of five people in one cluster — Sarah Sanders, John Bolton, Nikki Haley, Mike Pompeo and Mike Pence — I said, “Thank you, God. There is wisdom.”

Overseeing the Garden of God

The prophet continues in verse 21: “So I will deliver you from the hand of the wicked, and I will redeem you from the grasp of the violent.” That is not only a promise to the president. It’s a promise from the Almighty God to every person on this planet. Please do what this passage says and become the overseers of the garden of God, Planet Earth. Release the powerful weight of His kingdom presence — right here, right now, for His glory and eternal kingdom purpose.