God’s Power on Display in Police Sergeant’s Memoir, A Higher Call to Duty 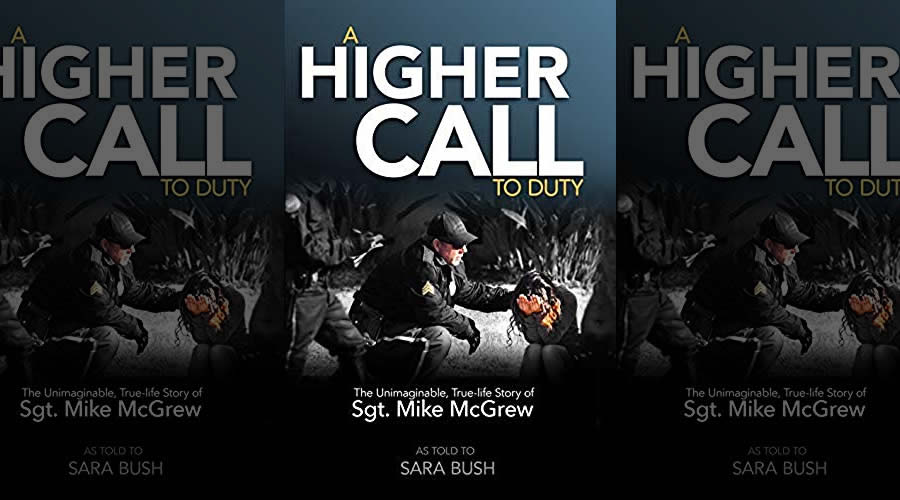 One day on the job as a police sergeant, now-retired Mike McGrew got a call about a suicidal woman. When he arrived on the scene, he found her lifeless. She had hung herself.

“We had cut her down and laid her down on the driveway and she was dead. Her eyes were open, fixed and dilated and her face was blue,” McGrew said. “I had been a cop for three decades and I’d seen a lot of people who did not make it, who I’d given CPR. The ones who you think, there’s a chance here and some you go, well, it’s probably not going to happen. So she was dead. But then the Holy Spirit said, ‘This one. You pray for this one.’ So I started to pray over her.”

As McGrew prayed, the woman gently closed her eyes. It was then that the paramedics found a pulse and blood pressure. They rushed her to the hospital.

Later, McGrew heard cops in the locker room. They were praising Jesus. “They saw that it was a miracle from God,” said McGrew. “And that’s what God does with miracles, you know? He just really shakes things up and He shows people that He is real and He is here.”

A Higher Call to Duty

McGrew retired from the Santa Barbara Police Department in 2017 after 31 years of service. In an interview with The Stream, McGrew talked about his new book, A Higher Call to Duty. It’s a book that can minister to anyone. The audience is “anybody that’s … been dealing with some challenges in their life and anybody that’s looking for peace and fulfillment,” said McGrew. He decided to write the book after he gave his testimony at a local prayer breakfast. His story impacted people at the breakfast and some told him he should write a book to help even more people.

It was about that time that McGrew was diagnosed with colon cancer. As he sat in his hospital bed, he decided to start writing. “At first, I didn’t think I was going to do it, but I prayed about it and the Lord said, ‘Yeah, go ahead and do that.’ So that’s where I started.”

That day, a local paper called McGrew. They wanted to do a story on him and the diagnosis. He told them he’d pray about it. When he returned their call, McGrew agreed to do the story, with one condition: the paper would have to agree to let McGrew talk about what God was doing during the cancer battle. The paper’s writer wrote the article, “proclaiming the good news of Jesus Christ on the front page of the newspaper,” McGrew said. When he saw that, he knew that the journalist, Sara Bush, was supposed to help him write his book.

In the early 2000s, McGrew’s youngest child was diagnosed with bone cancer. His older son was struggling with a drug addiction. McGrew also struggled with alcoholism. He didn’t have God to lean on as he struggled. But then one day he attended a Chris Tomlin concert at the request of the woman who later became his wife.

“I was trying to lean on myself for the strength to get through all this,” McGrew explained. “[I] finally got to a place where I had no place to look except for up.” When evangelist Louie Giglio spoke after the concert, McGrew wondered how Giglio knew his story. “The words just hit me so supernaturally.” The next day, with the assistance of his cousin Dan, McGrew accepted Jesus as his Savior. “It changed my life.”

Life wasn’t easy, even though he’d accepted Jesus. But his faith in Christ gave him the strength he needed to make it through the tough times. “My journey has not been an easy one. It’s been full of hardship and heartache, disappointment and despair, but it has also been full of grace and mercy, love and miracles.” He learned that the only way to handle his son’s cancer or his older son’s addiction was to “have faith and to rely on the Lord.”

McGrew’s youngest child suffered through six years of cancer treatment. Then one day, shortly after his 18th birthday, he overdosed on his medication and passed away. Before his conversion, McGrew would have turned to alcohol to numb his pain. “[B]ut because I had God to lean on, I was able to experience the comfort only Jesus can offer.”

McGrew is now an ordained pastor of Moriah Bible Fellowship in Santa Barbara, California. He also started a program called At Ease. It is a program designed to help first responders deal with grief and trauma — things he knows well. At Ease provides immediate crisis counseling, training workshops and other resources to first responders and their family members at no cost.

McGrew’s book offers hope. “This book has a lot about trauma. It has a lot about grief. … but when we stick close to God and walk with Him, you know, you can overcome anything. It’s just a message of hope and just helping people deal with different situations.”