‘God’s Not Ashamed of Me’: Lead Singer of We Are Messengers on Why Pro-Life Cause Matters 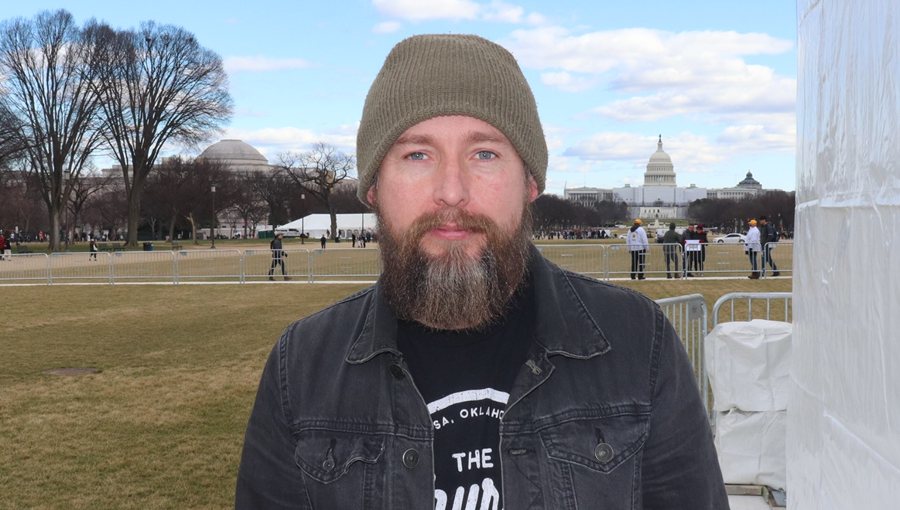 Tens of thousands gathered on the National Mall in Washington, D.C., Friday for the 50th Annual March for Life. Christian rock band We Are Messengers kicked off the event to rev up the crowd. (Not that they needed too much revving!)

After their first song, it became obvious they didn’t come to play a gig. Lead singer Darren Mulligan said: “I have stood outside Planned Parenthood facilities for many years, praying with other believers that are hoping for a miracle — that Roe would be overturned. Praise God, he is a God of miracles!”

Formed in Monaghan, Ireland, in 2015, We Are Messengers soon moved to Nashville and released their self-titled debut album the following year. It reached #10 on the Billboard Christian charts. And their recent single “Come What May,” from their record Wholehearted, hit #1 on Billboard’s Christian charts for 14 weeks. Not bad for a group of blokes who say they’re just about “Loving God and loving others.”

Following the band’s set, Mulligan spoke in an interview about what drives them. “Coming here is an opportunity for me to love on people who are doing the work of the kingdom,” he told me. “It’s people like this that inspire me on hard days to continue doing what I do, which is evangelism through music.”

He shares about their pro-life advocacy, responding to skeptics and his message to evangelicals about the cause of life.

‘I’m Not Ashamed to Stand for Life’

Darren, where do you hail from?

It’s rare for an Irish musician to be part of the whole CCM world.

Mulligan: You could say I’ve lived a couple of lives. God rescued me when I was 27 from a life of alcoholism, violence and adultery. So I dedicated my life to him. March for Life is one of my favorite things we’ve ever done. I believe that, as a society, we’re always going to be judged on how we treat the most vulnerable.

So the mothers facing crisis pregnancy, we’ve got to do a better job of protecting and serving them — giving them the choices they need to bring their kids into the world.

Some people would consider playing at a Washington event like this too controversial. They see this as a political issue. How do you view it?

Mulligan: I think it’s a human issue. I think politicians — and I have some great politician friends — are not going to fix this. It’s going to be a work of God through the people of God, loving the children of God that will lead this. But I do wish that our politicians would be more outspoken. If they really are there for the best of the people — that starts with life.

We’re too concerned about offending people. But we can’t do that anymore. We’ve lost too many children. We’ve seen too many mothers’ lives destroyed.

The laws in Ireland are more liberalized on these issues, is that correct?

Mulligan: Yeah, we were the first country in the world to vote for abortion by democratic mandate. But that was a reaction to years of abuse within the Catholic Church. So we have a culture that’s swung against the Church so extreme that they forgot the values that they had. Really scary. So to see Roe overturned here gives me hope that in Ireland we can overturn legislation, too.

‘It’s Not a Time for Cowards’

You mentioned the Catholic Church. Being from Ireland, you’d be familiar with the divide between Protestants and Catholics. Here the crowd is perhaps 75%-80% Catholic. As one who often sings to evangelical audiences, what would you say to believers in that community?

We’re too concerned about offending people. But we can’t do that anymore. We’ve lost too many children. We’ve seen too many mothers’ lives destroyed. And I for one, I’m honored to stand alongside the Catholic community in America and talk about this. They’re really brave and courageous. It’s not a time for cowards.

When it comes to supporting mothers and families in crisis, what practical steps are you taking?

Mulligan: Personally, me and my family, we support an organization in Nashville that provides women in crisis pregnancy with everything they need. They walk with them for many, many years — financial support, emotional support, medical support, clothing, everything.

We believe that you can’t just talk about being pro-life. You have to be pro-life. So we give our time, our finances, our resources to match the words that we speak. Otherwise, we’re just making noise. And we don’t need more noise. We need more support for these women in crisis pregnancy.

‘God Wasn’t Ashamed of Me’

You’ve perhaps had some PR people who’ve been skeptical about your band coming to an event like this. How have you dealt with that kind of criticism?

Mulligan: God wasn’t ashamed of me when he rescued me, and I won’t be ashamed of his children. Yes, I get in some trouble with certain sections of the media that can be very cruel towards us for engaging in things like this. But I’m not here to please man. I’m here to support those who don’t have voices: the marginalized, the outsider, babies in wombs, and mothers struggling to make the right choice.

How do you connect your story of being saved to your mission today?

Yes, Intrinsic Human Value is a Christian Idea, But Do You Really Want to Argue Against It?