Pastor Andrew Brunson was in a Turkish prison for two years. He shares his story in his new book. 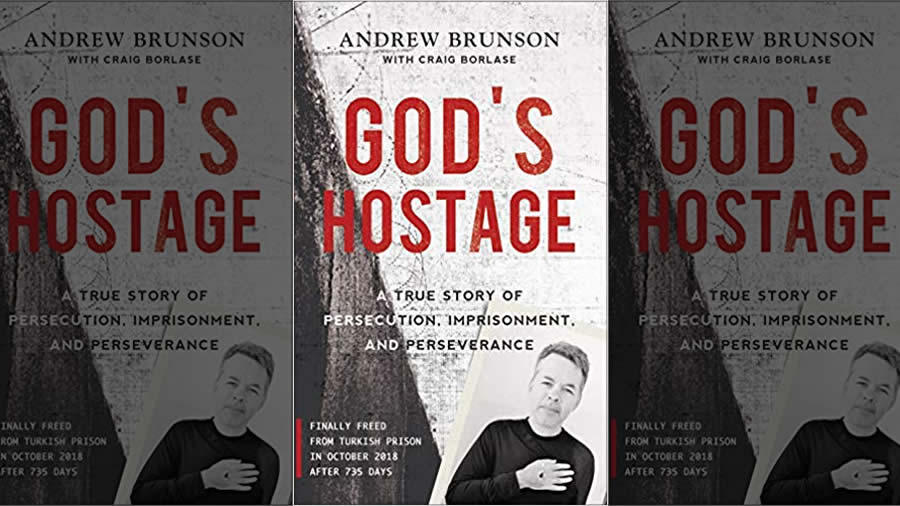 On January 23, 2020, LIFE Today will host Andrew Brunson and his wife, Norine, to talk about Andrew’s new book God’s Hostage. Andrew and Norine lived in Turkey where they started churches and trained believers. They were falsely accused of terrorism in 2016 and both were arrested. Norine was released after 13 days but Andrew was imprisoned for two years. The Stream’s Nancy Flory sat down with Andrew this week to discuss his new book, how he sought God during his lowest times and what he wants people to know about suffering for Christ.

When people read Andrew Brunson’s book God’s Hostage, he thinks they’ll be surprised. It’s not a “triumphalist” story. “Then they find out that, well actually, there was triumph but it came after a lot of brokenness. And a lot of people relate to that.”

During his two years in a Turkish prison charged with terrorism, Andrew broke. He thought he’d be prepared. “You know, ‘I’m going to be full of joy, full of strength, have a real sense of grace, palpable grace, presence of God.'” But he didn’t. “I didn’t have any of that.” His book is about “brokenness and coming through to rebuilding. God rebuilding me and coming out actually at a point of strength. But it’s very honest with the weakness and brokenness.”

Andrew struggled with depression and anxiety. He had doubts and questions. “I told my wife a number of times God chose the wrong man because I’m just not cutting it. I’m not strong like all these other people [jailed for their faith].” He came to believe that God had him there for a purpose. “At some point I came to think maybe God chose the right man because He chose a weak man who can be an encouragement to other weak people and persevering in weakness.”

“I still was weak,” he explained. “I still had fear, anxiety and grief, but I was intentionally looking toward God, running toward Him, desperately clinging to Him.” It was an act of the will to cultivate a relationship with God. He was looking at three life sentences. “I didn’t feel good. But it was a decision to, as much as possible, look toward Him, keep my eyes on Him, a desperate clinging you could say.”

He set aside his doubts. “I don’t need answers to have a relationship with You,” he told God. “That was a key thing for me, because up until then … all the questions and doubts were suffocating my relationship with God so that I couldn’t receive truth from the Bible, from my wife, from any source.”

Love for God and Fear of God

Andrew learned that he needed to do two things: cultivate intimacy, a love for God; and cultivate a fear of God. Intimacy is “the most important thing,” said Andrew. “And it prepares us — it makes us willing to suffer. A lover is going to suffer for his beloved. A servant will run away.”

Andrew also prayed for the fear of God. “God says, ‘I will put my fear in their hearts so they do not depart from me.'” He felt that if he had a healthy fear of God that he would be more willing to undergo what was necessary. Andrew learned to submit his will to God so he wouldn’t “miss out” on his assignments from God. He didn’t want to be in prison but was willing to do it if that was his assignment. “I said, ‘God give me the endurance so that I’ll be faithful in carrying out my assignment.'”

He says he started living for the day he will stand before Jesus. “What will He say about me?” Andrew questioned. “Will He say, ‘Andrew … I had all these things planned for you that were left undone because of your cowardice’?” He gained a perspective for eternity, because it is “what really matters.”

Andrew believes that Christians in the U.S. will suffer more for Christ in the near future. “I have a sense of urgency about it, that the next generation is going to face a much more hostile environment than it is even now,” he explained. “It’s coming quickly and … they’re not ready and many are going to be knocked out, become offended at God or run away in fear.” He said some will seek out teachers who will give them teaching that will justify compromise.

Christians must first have a mindset that persecution can come. “If it’s not part of your worldview or you have no expectation of it, then it blindsides you and then it can knock you out.”

Sooner or later each person will face the same moment in their life as Andrew did and he wants them to be prepared. “In the most difficult circumstances you still have a choice to make: to turn toward Him or away from Him. You need to turn toward Him. And then He meets us.”