Congressman Steve King of Iowa showed real civic courage in his recent statements on immigration. Christians should rally around him. 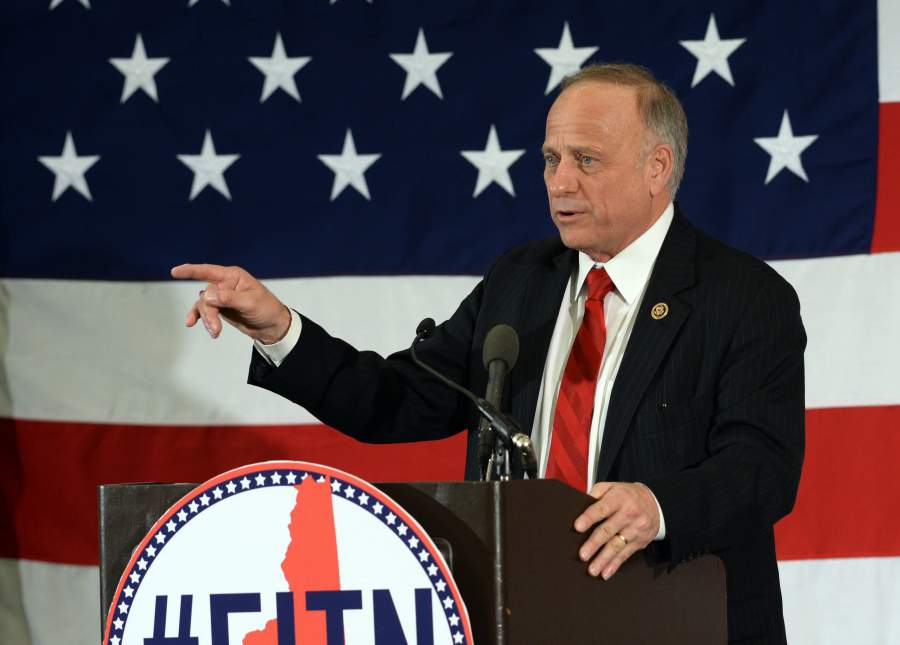 Most of the controversies that liberal journalists whip up these days have little basis in fact. But the tempest around Rep. Steve King is real, and points to profound issues that Christians, Americans, and conservatives need to think about. As The Hill reports:

King in a tweet praised Geert Wilders, including a cartoon depicting Wilders plugging a hole in a wall that reads “Western civilization.”

“Wilders understands that culture and demographics are our destiny. We can’t restore our civilization with somebody else’s babies,” the congressman wrote.

“It’s a clear message,” King said on Monday. “We need to get our birth rates up or Europe will be entirely transformed within a half century or a little more. And Geert Wilders knows that and that’s part of his campaign and part of his agenda.”

King went on to criticize illegal immigration to the United States and immigrants who don’t “assimilate into the American culture.”

“Living in enclaves, refusing to assimilate into the American culture and civilization. Some embrace it, yes. But many are two and three generations living in enclaves that are pushing back now and resisting against the assimilation,” he said.

The reaction to King was ferocious and predictable. Kim Bellaware at the Huffington Post labeled King a “white nationalist.” Worse, some self-styled conservatives took this occasion to polish their credentials as good multiculturalists, and suggested darkly that King was implying that children of non-European descent are somehow intrinsically inferior. As Belleware noted, every liberal’s favorite conservative, would-be NeverTrump spoiler Evan McMullin, promptly denounced him:

And a lonely Republican in Minnesota’s state legislature was happy to oblige:

.@SteveKingIA <— Rep King is…
A Fake conservative.
A Fake Republican.
But an authentic Cro-Magnon.

The first is the most obvious: as racism. The idea that babies from abroad cannot be civilized to Western values — that “somebody else’s babies” are unfit for assimilation — is racist. If that’s what King said and meant, he should immediately be censured by his Republican colleagues on the floor of Congress, and we should all pray that he loses his Congressional seat.

The second way to read the tweet suggests that it’s badly phrased but not racist: it could be argued that King was stating that multiculturalism, combined with high levels of immigration from non-Western cultures, shapes destiny. King could have been saying that high levels of foreign immigration to Europe in an attempt to prop up their ailing economies, without any sort of assimilation, will destroy the fabric of European civilization. That’s an argument that’s been made by European politicians ranging from David Cameron to Angela Merkel.

Fortunately, King cleared up which angle he meant on New Day on CNN. “It’s the culture, not the blood,” King said. “If you could go anywhere in the world and adopt these little babies and put them into households that were already assimilated into America, those babies will grow up as American as any other baby with as much patriotism and as much love of country as any other baby. It’s not about race, it’s never been about race … It’s a clash of cultures, not a race.”

Not Every Patriotism is the Same

Of course, Shapiro is right, especially in an American context. As Samuel Huntington noted in his classic study Who Are We?, America has evolved away from ethnic particularism as the source of our national identity. Through the experience of mass European immigration in the 19th century, then the Civil Rights movement, we pruned down the list of conditions we implicitly required for considering someone a “real” American. At the time of the Founding, that list was pretty extensive.

For leftists, having a pulse and making it successfully across the U.S. border legally or illegally is sufficient to make you an American.

A full-fledged “American” in 1783 was expected to be white, Protestant, English-speaking, and committed to the principles of the U.S. Constitution — which Huntington characterized as “tolerant, Anglo-Protestant” classical liberalism, a worldview whose philosophical spectrum runs roughly from Edmund Burke’s views to John Locke’s.

Today, mainstream conservatives have dropped each of those conditions except the last one: We demand that new arrivals — and fervently hope that native-born citizens — accept the political and cultural heritage of Anglo-Protestant liberalism, circa 1783. There is more to that heritage than just Constitutional principles. It also includes civic virtues that our Founders took for granted:

What marks off leftist multiculturalists is that they drop even these conditions — and demand that the U.S. welcome immigrants who accept neither our Constitutional principles nor our culture. Apparently having a pulse and making it successfully across the U.S. border legally or illegally is sufficient, nowadays. Deny that, and the Left will denounce you as an extremist.

Do Europeans and Japanese Need to Learn Americanism?

One of the reasons King’s statement sparked such passions is that he seemed to be likening American identity to older versions of patriotism whose nature is markedly different. In The Netherlands or in Poland, in Japan or in Korea, the nation has traditionally been defined quite differently than in the U.S. Those smaller, more homogenous nations have a distinct ethnic component to their sense of nationhood. Extreme versions of such nationalism can verge over into ugly, nasty racism, as the 20th century taught us. (Then again, non-ethnic systems like Communism can prove even worse. Benign Polish nationalism helped bring that Leviathan down.)

Citizens of Israel or Croatia experience nationhood as a large, extended family.

But things need not go that far. There is a benign sense in which citizens of Israel or Croatia experience nationhood as a large, extended family. While they might “adopt” those of different ancestry who embrace their nation’s other values, that openness won’t dissolve the norm that the nation is bound by a sense of familial kinship — the ordinary, human feeling that’s shared by members of an Italian-American club in New York City, or a black fraternity in Georgia. That’s the same feeling which on a micro-scale makes ordinary people prefer to beget their own children, rather than sterilizing themselves and adopting needy children from other lands. I have actually heard people say that doing that would somehow be “more Christian.” That suggestion is multiculturalism in its chemically purest form.

It is simply cultural imperialism, or ugly American snobbery, to suggest that the U.S. model of nationhood is the only morally legitimate one on earth — and that the forms which patriotism takes in Mexico, India, Hungary, or the Netherlands, are somehow “Cro-Magnon” or racist. We should assert, of course, that human and civic rights must be accorded to every human being as the image of God — and disfavor nations that mistreat human beings because they belong to minorities. The plight of Asian Christian “guest workers” in Saudi Arabia, for instance, or suppressed Tibetans in China, ought to move us. But we shouldn’t treat all forms of national association other than propositional Americanism as failures to attain the proper goal of every nation on earth: to be just like us, in every way.

Ordinary people prefer to beget their own children, rather than sterilizing themselves and adopting needy children from other lands.

In fact, ours is a noble experiment, a hopeful bet on the idea that sound political principles and a flexible, robust culture will assimilate newcomers in large numbers — instead of being itself dissolved by the sheer entropic force of human differences.

One way to make sure that a country really does collapse is to pretend that it doesn’t matter whether its citizens are willing or feel able to have a decent number of children — or if they outsource that “dirty job” to recent or future immigrants, as if human children were interchangeable production and consumption units, and child-rearing were some grubby sweatshop industry. A government that pretends this is true will actually harm the prospects of parents who wish to have decent-sized families, and become in turn addicted to immigration to fill in the “gaps.” For every “missing” German baby, import a Syrian. What could possibly go wrong?