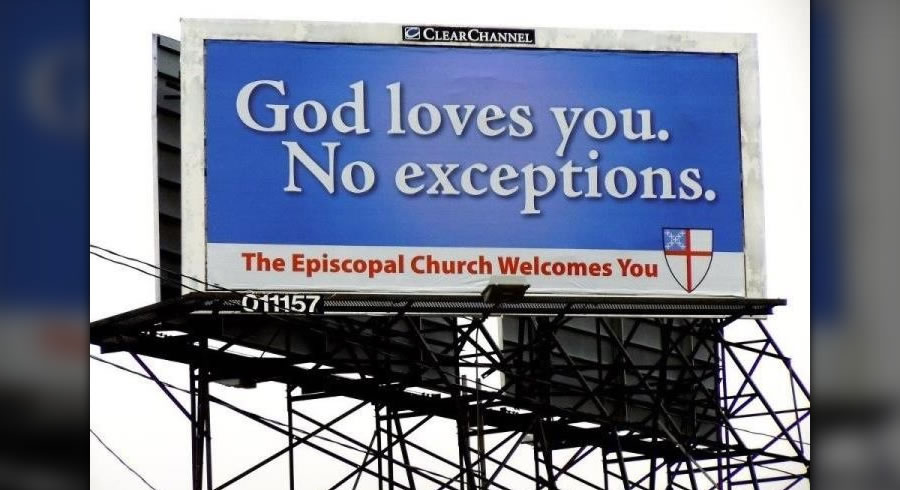 The other day I saw a banner hanging on a church that read, “God loves you. No exceptions. The Episcopal Church welcomes you.”

It’s disturbing to see the truth used to deceive.

For, while the message is true as far as it goes, there’s another message hidden in that “welcome.” The Episcopal Church has taken a strong stand in favor of homosexuality. Episcopals in the U.S. have ordained a non-celibate gay bishop, in defiance of the worldwide Anglican communion the church is a member of. In 2012, they authorized a “rite of blessing for same-gender relationships,” and three years later they “made the rite of marriage available to all people, regardless of gender.” The Episcopal Church is all in for same-sex marriage.

Half-truths make the most successful deceits. This banner says something more between the lines more than it should say; it also leaves out something that belongs there. There’s more to following Christ than the Episcopal Church lets on. All are welcome, but on His terms, not ours.

Jesus Christ always set the conditions for following Him. The gospels give us example upon example. Two people came and said they wanted to follow Him. Jesus answered (in effect), “Here’s how: don’t delay, come now, and don’t expect it to be easy.” (Matt. 8:18-22)

Another young man asked how to receive eternal life, and Jesus told him to sell all he had, give to the poor, and then follow Him. (Mark 10:17-22)

After Jesus fed the 5,000, many of them followed him until He brought up some hard things in His teachings. People started drifting away; He responded by teaching harder things. Even more left Him then. Finally He asked the Twelve if they would leave, too. Peter answered, “To whom shall we go? You alone have the words of eternal life.” (John 6:60-69). All were welcome, but they had to accept His teaching.

This, by the way, is the same Peter who had seen Jesus perform a great miracle and responded, “Depart from me, for I am a sinful man!” Jesus called him to follow anyway, along with the rest of the Twelve. (Luke 5:1-11). As always, though, it was on His terms: “Follow me,” He said, “and I will make you fishers of men.” (Matt. 4:14-19). It was His call, His initiative, His plan: His terms.

Jesus wants to lift us above our pains, losses and sin — into the true life of loving fellowship with Himself.

So yes, Jesus welcomed everyone. But He was firm about the conditions. He pointedly excluded people who wanted to set their own terms. Following our Lord’s example, the Apostle Paul even told one church to exclude a man on account of his unrepentant life of sexual sin. (1 Cor. 5:1-8)

God loves you. No exceptions. All are welcome — on His terms.

Leaders of the Episcopal Church have that decided God’s terms are too narrow. They forget what Jesus did in His Sermon on the Mount: He tightened the standards, up to and including, “You, therefore, must be perfect, as your heavenly Father is perfect.” (Matt. 5:21-48). Almost everyone admires that statement as the high moral teaching it is; few think it was unloving on His part. To loosen His standards is to turn away from His perfect goodness.

Does this seem harsh? Only if we deny that our Creator has the wisdom to love us in a way that fits how He designed us.

Come to me, all who labor and are heavy laden, and I will give you rest. Take my yoke upon you, and learn from me; for I am gentle and lowly in heart, and you will find rest for your souls. For my yoke is easy, and my burden is light. (Matt. 11:28-30)

In context of His whole teaching, though, it’s clear that He wasn’t lowering the standard of righteousness. He was promising to carry it for us instead.

His standard is good. It’s neither harsh nor unloving, even for LGBT people. Same-sex attraction is not the “gay” experience gays want us to think it is — or even, I’m convinced, as they want to convince themselves it is. Jesus wants to help carry LGBT persons’ pain, but He doesn’t do it by saying, “Whatever you want to do is fine with Me.” He does it the same way He does for all of us in our own sufferings and failures: by giving us grace and forgiveness as we turn away from our sin to look toward Him instead.

Jesus wants to lift us above our pains, losses and sin — into the true life of loving fellowship with Himself. Churches that tell LGBT people there’s no need to confess or repent actually do them harm by cutting them off from that light yoke of His.

God doesn’t exclude LGBT people. He only says to them, as He does to all, “You are welcome to come — on My terms.” His body, the Church, is subject to those same conditions. We are in no position to change God’s terms for Him.