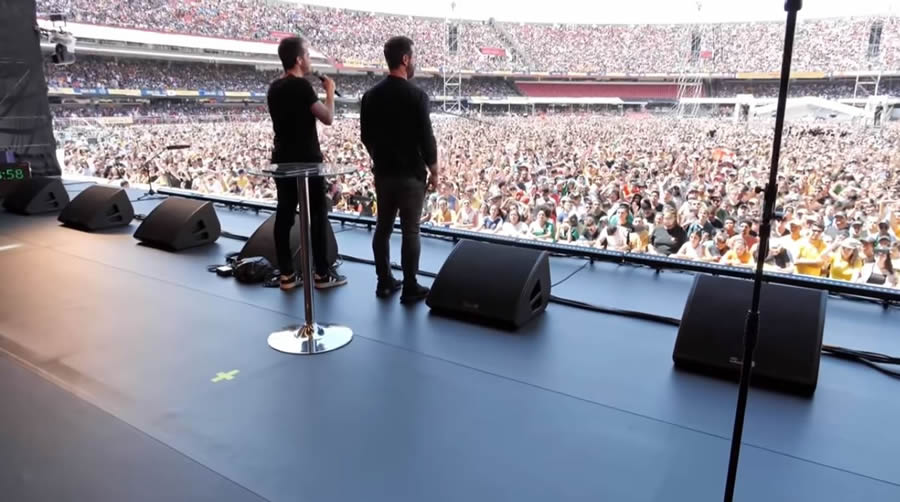 Thousands of youth attended a Christian event in Brazil focused on sending missionaries into the world. The president of Brazil, Jair Bolsonaro, also attended.

The Send Brazil event occupied three stadiums and lasted 12 hours. The event reached 1.7 million people watching the livestream in Portuguese and over 560,000 watching in English. Many committed to fasting, reading Bible plans or sponsoring missions to the nations, colleges and high schools. Thousands made decisions for Christ.

“The outpouring of healing, miracles, signs and wonders was mindblowing, the display of God’s power in all three stadiums,” Byrd said. Byrd is the leader of Youth With A Mission (YWAM). “This whole event was about the exultation of Jesus and the empowerment of the 24 year old, equipping the next generation to change the world.”

Hayashi founded a university ministry called Dunamis Movement. He’s also a pastor of Zion Church in Sao Paulo. “God activated a huge evangelical youth church to the great commission and God empowered a generation to do the works of Christ beyond the four walls of the Church,” he said. The three stadiums — Brasilia Nacional Stadium, Morumbi Stadium and Allianz Parque Stadium — held more than 140,000 young people.

A total of 180 people spoke at the event, including evangelical leaders Francis Chan, Michael Koulianos, Todd White, Daniel Kolenda, Randy Clark and Christine Caine, among many others.

Kolenda, a missionary evangelist and CEO for Christ for all Nations, has led over 21 million to Christ through his evangelistic campaigns. “God is on the move in Brazil!” he told the young people. Caine told the crowd that Christians cannot keep the good news of Christ to themselves. “Empowered by the Spirit of God, we must make Jesus’ last commandment our first priority!” Koulianos declared “Jesus loves Brazil” and that He was in the stadium.

President Bolsonaro wasn’t invited by The Send Brazil, but came anyway. He asked the young people for prayer. He said he is a believer in Jesus and that Brazil “belongs to God.” He wanted to witness the historic event first hand. Local news outlets called the event the “largest Christian simultaneous event in Brazil’s history.”

Fox News interviewed three attendees from Sao Paulo. An 18-year-old man said he wasn’t sure what to expect. “But it was so nice to see everyone together there, singing, jumping, dancing for one reason: Jesus!” He also witnessed miracles. “The most memorable thing for me was when a man got up from his wheelchair and then raised his wheelchair for everyone to see that he got healed!”

A young woman said she witnessed people getting touched by the Holy Spirit. Another young woman said the atmosphere was “incredible.” Thousands said “yes for the manifestation of the kingdom of God all over the world.” She added that the glory of God was palpable. “We were able to experience the cures and wonders, the deaf heard again, the blind saw, the paralyzed walked again. In one voice we declared: ‘Here I am, send me.'”

The Send posted on Instagram that there is no way back. “Here we go! We were full of the Holy Spirit, healed, equipped and we’re finally being SENT! We won’t stop until every nation and every soul meets our Savior. #thesend #thesendbrasil.”

The Military as a Mission Field: The Brown Family’s Story