Is God Capturing the Heart of Donald Trump? 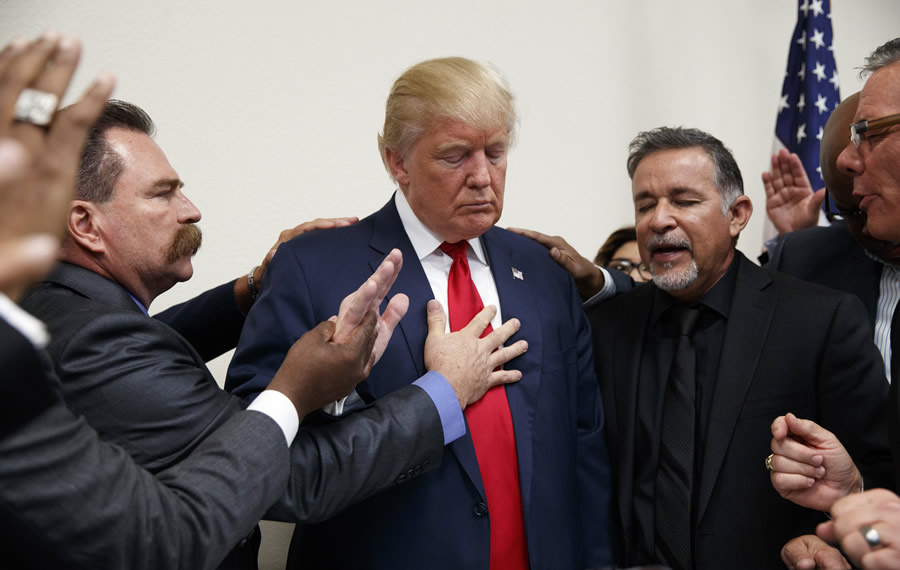 In this Oct. 5, 2016 file photo, pastors from the Las Vegas area pray with Republican presidential candidate Donald Trump during a visit to the International Church of Las Vegas, and International Christian Academy, in Las Vegas.

When I walked in Mr. Trump’s office in April 2016 at his invitation, I knew I had been sent by God. I went with confidence in the Lord, trusting that He would speak through me. I was impressed to ask Mr. Trump’s second son, Eric, to join us for the first few minutes. I felt he would want to say some things about his father, and I would say some things about the need for a fatherless nation to have a father. The interaction was gratifying — more than I could have hoped.

Eric said, “I have a great father.” I said, “Let’s join in prayer and hope that he will learn what it is to be a wise father figure to a fatherless nation.” Eric agreed, and I don’t think we’ve ever stopped agreeing in our hearts and in prayer that President-elect Trump can actually become that kind of example.

I believe Donald Trump is diligently seeking to heed what every American must know: America cannot be great without God.

Not many thought what is happening with Mr. Trump would have been likely, perhaps even possible, and certainly not probable. As I look in from the outside, and also from the inside as a result of the journey I’ve had in interaction and prayer with Mr. Trump, I sense that he is being captured by the heart of our Father.

I think many of his decisions may even surprise him — not that he lacks a brilliant mind, tremendous insight and ability to make a deal. This is beyond that. In my opinion, Mr. Trump is receiving wisdom only God can provide. The Lord freely offers it to anyone willing to hear, seek and heed. I think Mr. Trump is hearing, and I believe he is diligently seeking to heed what every American must know: America cannot be great without God.

The Great Shepherd in Stormy Times

I believe God is seeking to impart to President-elect Trump, Vice President-elect Pence and every prospective cabinet member the very heart of the ultimate Father and the Great Shepherd. Our Lord made it clear that when we allow Him to become our Shepherd, we need not want. He is our source. However needy we may be, He is the solution and He will often use compassion-filled people to meet our needs. But we will never, never become dependent on a source other than God our Father and Shepherd.

When we understand the freedom the Shepherd offers, we refuse to become pawns to any power-broker, power source or political party; for the Shepherd, who loves us with the love of the Father, will lead us in green pastures, not barren deserts. He will meet our needs. He will give us opportunity and productivity. He will lead us beside water made calm by His Spirit.

“We’re going to keep surrounding you with prayer, love and all the help we can give you,” I said the morning after the election. He responded, “Surround me. Don’t let me ever forget! Surround me!”

The raging storms of terrorist activity and continual threats to freedom can be miraculously calmed. The enemy will not cease to scheme, plot and attack, but when we move into the presence of overwhelming peace that only God can offer, there will be supernatural calmness and security. We will find our souls being restored, just as Betty’s and mine are being restored now.

Four years ago, just three days after Christmas and three days before the new year, we lost our baby girl, Robin — our miracle baby. That beautiful baby we did not expect and was so difficult to carry to term came into this world to sow seeds of life for the next 40 years that will reap eternal dividends. When we think of our precious daughter, our Lord restores our soul. He binds up our broken heart. Yes, it is still broken, and He is still binding it with His love and peace. We will depend on that from now until we see our beautiful daughter in His presence when we enter forever the house of the Lord. And we will say with her, “I was glad when they said, ‘Let us go into the house of the Lord.’”

I can promise you that God our Father and Shepherd wants to restore the soul of every person reading these words and every broken heart in this nation. He will lead us not in paths of religious pretense and the “traditions of men taught as the commands of God” but rather in His righteousness, and He will do it for His name’s sake, for His glory — and He will be exalted.

I want to be honest with you. I think the leadership we have chosen in our nation wants that deep in their hearts. They may not say it the way we as Christians would want to hear it, but I believe it is the longing of their hearts. Yes, I believe it is the longing of President-elect Trump and Vice President-elect Pence. I believe Mr. Trump wants for you something so far beyond what he can give you that he knows it must come from above. The morning after the election, I talked to him by phone. “We’re going to keep surrounding you with prayer, love and all the help we can give you,” I said. He responded, “Surround me. Don’t let me ever forget! Surround me!”

I’m saying to every person who knows how to pray, who knows God as Father, and who has experienced the watch-care of the Great Shepherd, please pray for our nation’s leadership and all they appoint, for they will be under fierce assault.

You can rest assured there will be a non-stop, all-out attack on every decision Mr. Trump makes. Some will be as fierce and potentially damaging as the father of lies, the enemy of truth and wisdom, can bring to pass. You will see venomous hatred spewing from expected and unexpected sources.

The poisoned darts will also be aimed at those he appoints. I’ll be sharing in another column their willingness to wear the bull’s-eye on their backs and sacrifice for their country, knowing the cost for taking this journey with President-elect Trump.

Our experience with our daughter confirms that even when we “walk through the valley of the shadow death,” we “fear no evil” because He is with us. As the passage says, “His rod and His staff comfort us.” That means we receive His correction and direction through the rod and the staff of the loving Shepherd. He will, in fact, “prepare a table before us in the presence of all our enemies and anoint our heads” with the oil of His love, compassion and mercy. We will be able to say we are witnesses of the fact that “goodness and mercy” indeed follows us all the days of our lives and throughout eternity. And we know that we “will dwell in the house of the Lord forever,” beginning now, as we choose to live in His shelter.

This is the heart of the Father and the heart of our Shepherd. I believe it’s what the people who voted for correction, hope and change in our nation desire — whether they’ve confessed the Lord or not. How I pray that all will come to know Him and experience Him with all the evidence of His grace and glory. I believe the desire of our Father and Shepherd is the desire of the leadership we have chosen in our nation. We must pray for that because if that is not their desire, it must become their desire. Our desire must be His desire.

We Can Make a Kingdom Imprint

Let me sum it up. Although I was not initially a Donald Trump fan or supporter, God sent me to him. The love God has given me for him is totally supernatural. Although he might not put it in these terms, I believe Mr. Trump wants what our Father in heaven wants for all people: God’s best for you and every American. I think he knows that if we receive God’s best, we are in fact going to be a blessing and an inspiration to the nations of the world, and we will be a beacon of hope and freedom until Christ comes. We can make a kingdom imprint in today’s very sick world.

Five Years of Streaming: I Pray You’re Blessed by It

Faithful to His Promise: God is Answering the Prayers of Those Called by His Name