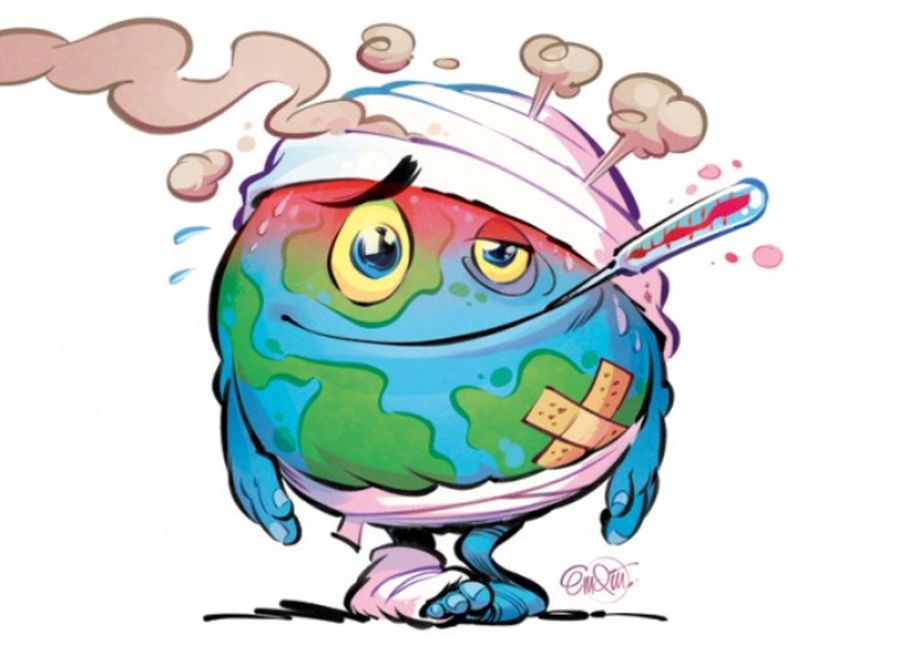 In the late spring of 1988, Senator Tim Wirth from Colorado (guess his party) called the Weather Bureau and asked what historically was the hottest day of the year in Washington, DC.

He needed heat for the theater he was cooking up.

He got it. That June, he recalled, was “stiflingly hot.” To give nature a boost, on the night of June 22, he snuck into the Senate hearing room and opened all the windows. The air conditioning was either switched off or chose that moment to break.

Wirth later boasted to PBS that

when the hearing occurred there was not only bliss, which is television cameras in double figures, but it was really hot …

So [NASA’s James] Hansen’s giving this testimony, you’ve got these television cameras back there heating up the room, and the air conditioning in the room didn’t appear to work. So it was sort of a perfect collection of events that happened that day, with the wonderful Jim Hansen, who was wiping his brow at the witness table and giving this remarkable testimony.

In that manufactured swelter on June 23, 1988, Global Warming was born. Happy Anniversary.

Today, thirty years later, Global Warming is dead. Make that undead. Its corpse still walks among us, awaiting its final stake through its heart.

Politicians like Wirth, and the scientists in their employ, had a streak of good luck. Hansen said it would get hotter, and then it did. People doing things like breathing and driving cars were adding “greenhouse gases” to the atmosphere at rates faster than ever before. The correlation between increasing heat and gas was obvious, and it quickly became a cause. Both in the physical and social sense.

There was some reason to believe Hansen was right in those early days. It is a trivial truth that man influences the climate. And scientists had already accepted the idea that man could significantly affect it. A decade before Hansen’s performance, the consensus was that man was driving temperatures dangerously down. Pollution from cars and the like was knocking back the sun’s rays, which was going to cause global cooling.

Global cooling was no small thing. In April 1975 Newsweek spoke fear in “Our Cooling World.” Global cooling was going to cause “serious political implications for just about every nation on earth,” “The drop in food production could begin quite soon,” “devastating outbreak of tornadoes,” “national boundaries make it impossible for starving peoples to migrate from their devastated fields,” and so forth.

The global cooling consensus of the 1970s was small, but not insignificant because climatology was only then developing into a separate field from meteorology and other atmospheric sciences, and all these sciences were small.

That man was having a devastating, irreversible-without-government-action cooling effect on the earth’s climate would later become something of an embarrassment to climatologists. Which is why they did their best push global cooling into the memory hole. But there was so much material, it overflowed. Even Spock warned of the coming snow. And don’t miss the earnest interview with Stephen Schneider, who would go on to give many earnest interviews about global warming.

But by the time Wirth staged his event, 1978 was ancient history. We knew lots more about the atmosphere in 1988 and had exponentially better computers. Besides, just look at those thermometers inching up! And did you see that scary hockey stick? We must Save The Planet!

Celebrities Are Our Leaders

It wasn’t long before a politician made an Oscar-winning documentary film about global warming. That the film was saturated with errors and made laughable predictions did not matter. Global warming had to be as frightening as the film portrayed, otherwise the politician-turned-actor hosting it would not have looked so serious.

It wasn’t just politicians. Important people the world over were warming to the coming heat. Actors, musicians, pastors, people famous for being famous, chefs, novelists, school teachers, bureaucrats, activists, academics in such widely varying fields as sociology to psychology, and of course lawyers and news readers. Oh, plus a handful of physical scientists (most kept their heads down).

When celebrities speak, we listen. Even if they’re wrong in the details, that so many elites knew global warming was on its way was convincing enough evidence something had to be done.

That something was government. More and larger government. The government took up this challenge and did what it did best: spend money. Lots of it. Soon, every major grant-reliant scientific association, no matter how tenuous its connection to atmospheric physics, issued official statements on how horrible global warming was going to be — once it got here.

Researchers ran to their computers and offered “studies” showing global warming was going to cause an increase in mosquitoes and a decrease in polar bears. Ambulance rides were going to become more frequent in Australia. Prostitution would flourish in the Pacific. Fish were going to grow to abnormal size and clean out the oceanic grocery store. Fish were going to shrink to cope with the heat.

Yet that global warming would have increased the frequency of warm summer afternoons and would produce richer and more abundant crops (by eating the extra carbon dioxide) was not welcome news. When economist Bjorn Lomborg suggested that even at its worst global warming would be easily coped with, he was scientifically lynched. When a team of four scientists (of which I was one) suggested we’d only see maybe 1 degree of warming, and not the four, five, six or more claimed by the Consensus, the establishment turned into Lost In Space’s Dr. Smith.

Amidst all the marches, protests, dire warnings of “tipping points,” announcements of “record” heat (in very short periods of time), and cries of climate “denial” something funny happened. The temperature stopped cooperating with climatologists’ models.

Scientists said the mercury had nowhere to go but up. The atmosphere disagreed. A fundamental tenet of science is that its theories must match reality. When reality differs, the theory is wrong. Scientists in control of the Consensus knew they were in deep kimchi, but they were loathe to admit their critics’ points.

Then some wag hacked the emails of Consensus scientists. They spoke of using tricks and hiding declines in temperatures. They boasted of political prowess in keeping peers from publishing skeptical views. Climategate revealed scientists to be as backbiting, manipulative, hateful, suspicious, and cocky as, well, politicians.

Doubt in global warming catastrophe grew. This worried the catastrophists. If global warning was not a problem, then it didn’t need a solution. But the solution was too intoxicating to abandon.

Neither Hot Nor Cold

Enter “climate change.” Global warming became like that movie where the lady on the train vanishes, and where everybody claimed never to have seen her. Climate change, not global warming, was always the real worry.

Wouldn’t you know it, though. The atmosphere again refused to cooperate! Oh, sure, there was the occasional hurricane or drought to keep things spicy. But on the whole it was nice outside. And nobody would ever admit that it being nice outside was because of climate change. Climate change by definition brought only evil.

Here we are, thirty years after the klaxon. Life is better, or at least no worse, as far as environmental conditions are concerned. Whatever trouble we had from global cooling, or rather global warming, was not that bothersome. We discovered there are plenty of more pressing problems to worry about.

The boorish behavior of activists, the endless hectoring of politicians, the realization of what shutting off fossil fuels really meant, the whopping pile of failed predictions, all that and more, killed global warming as a mass cause.

The undead corpse of global warming is animated now only by the hopes of a handful of true believers.

Smarter activists see the futility of climate change and have begun the work of metamorphosing the cause into something grander.

The seeds for this growth were planted in the Paris “climate” accord, which called for “gender equality, empowerment of women, and intergenerational equity” as well as “climate justice.”

All that was missing was transgender “rights.” But don’t worry. That’s being taken care of, too.