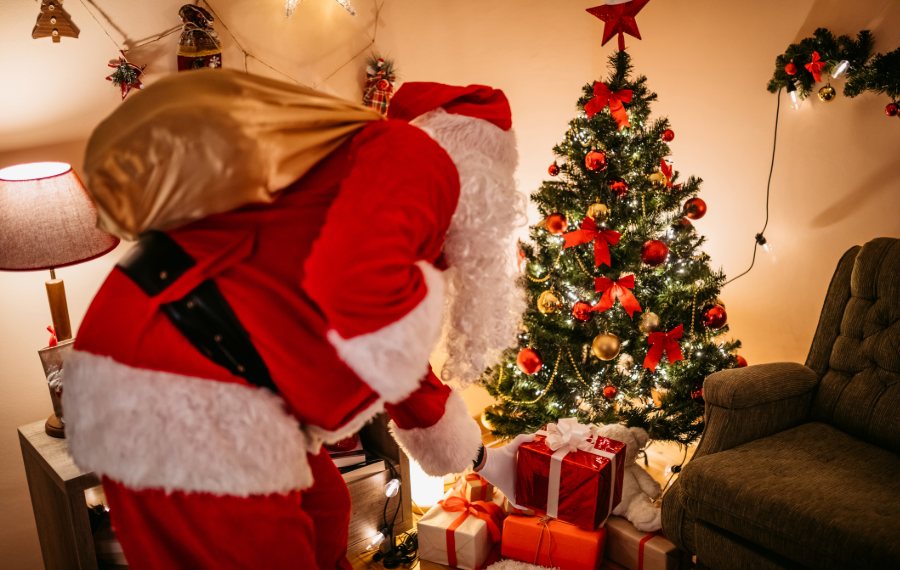 By Dwight Longenecker Published on December 24, 2020 •

This time of year always sees a few Scrooges and Grinches getting grumpy about Santa Claus. Maybe they don’t like the fact that the fat man in the red suit is associated with materialism at the mall. Some of them grumble that Santa is a pagan elf that has infected a Christian Christmas.

Others think it’s a bad thing to tell your children lies — even to the extent of putting carrots and cookies and milk by the chimney. Some simply think the whole Santa thing is a stupid, tacky and terrible part of Christmas — as bad as Frosty the Snowman and fifteen-foot inflatable illuminated nutcrackers on your neighbor’s front lawn.

Christmas needs Scrooges too. But I’m for setting them all on one side, and celebrating Santa — trying to remember who he really is underneath the Coca-Cola ads and Norman Rockwell paintings.

Santa Claus is an interesting amalgamation of various European and Christian traditions. He has adapted and adopted modern ways to perpetuate his myth, and he survives now as a curiously popular and perennial version of our shared tradition. Why not enjoy Santa? He’s a venerable part of our European-American traditions.

Where did Santa come from? First of all from St. Nicholas, the feisty and famous fourth century bishop of Myra, in what is now Turkey. Feisty because he was a defender of the faith and a missionary. Famous for his work with the poor — dropping gold through the window of a poor man to ransom his daughters, and rescuing poor boys from human trafficking. Nicholas became the patron of children. His feast day of December 6 was celebrated with various charming traditions across Europe.

The Dutch were especially fond of the one they called “Sinterklaas.” He was portrayed as an old bishop with a long white beard, a red bishop’s hat, robes and bishop’s staff. He comes on a steamship from Spain and rides a grey-white horse. On his gift-giving expeditions, across the rooftops, dropping gifts down chimneys, he was accompanied by “Zwarte Piet” — Black Peter, a master of mischief.

Meanwhile, another bearded old man had been making the rounds in the bleak mid-winter long before St. Nicholas arrived on the scene. The god Odin was a Gandalf-type figure who bore the alternative name Langbaror, or “long beard.” Along with the beard, he wore a cloak and a broad brimmed hat and carried a staff. Odin was master of the ancient Yule celebration, spread across Northern Europe. The leader of the Wild Hunt — a ghostly procession through the sky, he rode an eight footed beast named Sleipnir to bring gifts to his people.

Thus Odin was gathered up and baptized, if you like, by St. Nicholas — who, in Puritan England, evolved into the non-Catholic Father Christmas. The Dutch brought Sintaklaas with them to New Amsterdam. New Amsterdam became New York, and “Sintaklaas” became Santa Claus.

As the term “Santa Claus” became separated from the Catholic Sintaklaas, or Saint Nicholas, so the bishop’s outfit disappeared. In Charles Dickens’ A Christmas Carol, the Ghost of Christmas Present — the jolly and generous old man — was pictured without all the Catholic bishop-like trappings. Instead, he wore an English-style green cloak, and had holly in his hair. Around the same time, in 1863 the American illustrator Thomas Nast portrayed Santa as a rotund figure dressed in warm red winter woolies. No longer was there even a hint or nod to the garb of a fourth-century, gospel-preaching, children-rescuing bishop.

The new image of Santa Claus in the mid-nineteenth century sprang from the 1821 publication of A Visit from St. Nicholas by Clement Clarke Moore — the poem better known as The Night Before Christmas. In it he is first seen as a jolly elf. He has a belly that shakes like jelly and “a miniature sleigh and eight tiny reindeer.” His oft-forgotten diminutive stature explains how he gets down the chimney. By the 1930s, Santa had fully evolved into the red and white suited, oversized guzzler of Coca-Cola, gone global.

Santa: An Enjoyable Part of the Christmas Celebration

What’s wrong with Santa? Nothing really. He’s an enjoyable part of the Christmas celebration. Some latter-day Grinches dislike Santa because he’s pagan or Catholic or both. But their logic doesn’t follow. Vestiges of Catholicism and paganism are scattered throughout our American culture in ways too numerous to mention.

Santa Claus should be part of our Christmas as long as it is not the main part. His focus on children and gifts is a reminder of St. Nicholas’ rescuing of children with gifts.

There’s nothing wrong with Santa as such. The problem with our modern Christmas is that too often there is nothing but Santa. The modern Santa Claus is a manifestation of our culture and belief system, just as much as Odin was for pagan Germanic peoples and St. Nicholas was for medieval Christians.

As such, he holds a mirror up to us and our culture without — and what we see is a culture that used to be Christian, but which has evolved into a cheerful, consumerist secularism. In Santa we see a culture that is overweight with happy materialism — laughing with oblivious, self-indulgent pleasure.

Santa Claus should be part of our Christmas as long as it is not the main part. He is part of the wider celebration — part of the extra decoration. His focus on children and gifts is a reminder of St. Nicholas’ rescuing of children with gifts. Finally, Santa’s attention to children and his giving of gifts is a pointer to the profound truth that children are a precious gift, and that the Child of Bethlehem is the greatest gift of all.

Read Dwight Longenecker’s astounding discoveries about the wise men who visited Jesus. The Mystery of the Magi-The Quest to Identify the Three Wise Men. dwightlongenecker.com