Giddy and Grieved Over the Jussie Smollett Hoax 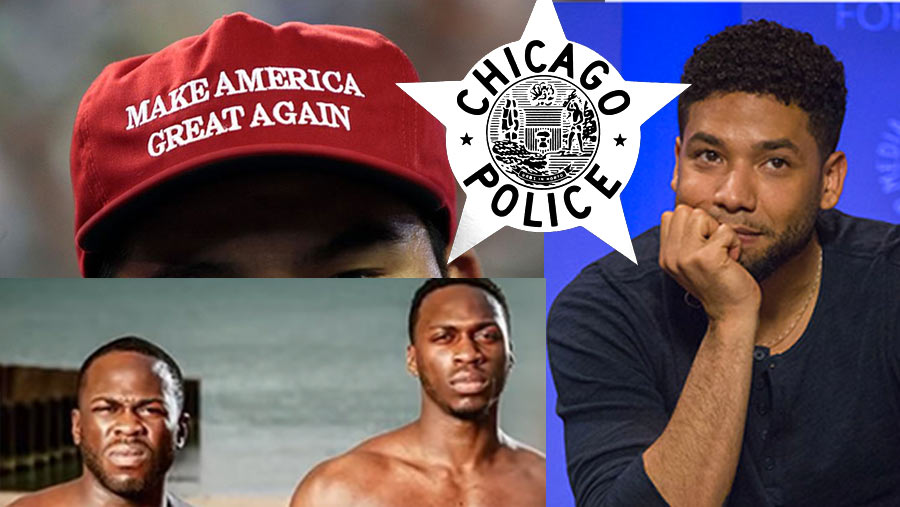 Smollett claimed he was assaulted by two white men shouting racial and gay slurs, declaring, “This is MAGA Country.” For good measure, he claimed that his assailants threw a rope around his neck. In an interview airing just last Thursday Smollett insinuated you were a racist if you even doubted his account.

Turns out the two “attackers” were Nigerian brothers, pals of his who work on his TV show and work out with him. Sources on the Empire set tell TMZ the brothers — Olibingo and Amimbola Osundario — are no supporters of Trump. The rope? Purchased by the brothers at a local hardware store. According to multiple outlets, the brothers told police Smollett paid them $3500 to help carry out the hoax. CBS Chicago reports the trio even rehearsed the assault.

Shakespeare in the Park isn’t as staged as this attack.

Chicago police want to talk to Smollett again, citing the change in direction of the investigation. He is thus far resisting. Smollett is denying that he faked his assault. With good reason. He faces up to three years in prison if charged and convicted of filing a false police report.

Yes, the revelations leave loads of Trump supporters giddy. And no, such feelings are not “gross.”

The giddiness isn’t so much about Smollett. One hateful, vengeful actor doing one stunningly, criminally stupid, career crippling thing doesn’t a party make. Ultimately, he’s a bit player in this movie. A cameo in a 1000 day farce.

For three years now, Trump supporters have been putting up with this nonsense. Ever since Hillary Clinton paid Alinksy-trained operatives to instigate violence at Trump rallies. Ever since her mainstream media partners played the “Trump Supporters are Racist, Violent Homophobes” tune as often as classic rock radio plays Led Zeppelin.

Cupp’s own CNN spends 24 hours a day with hosts and guests trying to outdo each other with the game “Just How Horrible Are Trump and His Supporters”? I was going to say the only time they pause the game is during weather reports, but even bad weather is blamed on Trump.

All Trump Hate, All the Time

How about the endless stream of fake stories blaming Trump and supporters for all sorts of bad business? From Trump supposedly removing the MLK bust from the Oval Office on Inauguration Day … to the Muslim student in Louisiana who “fabricated” being attacked by MAGA thugs … to the vandalism that turns out to be the work of liberal activists … to nooses on campuses that turn out to be hoaxes … to the MAGA hat-wearing Covington Boys being falsely accused of taunting a Native American elder.

How cold, corroded and lost is your heart that you would pay to get beaten up at 2 a.m. in sub-zero weather in order to frame strangers with whom you disagree politically? Your masked assailants represented all Trump supporters. A hate crime pinned on innocent chests. Did you get into acting in order to act out something so destructive and hurtful to others? How can one lose so much empathy for your fellow man?

Trump got blamed for the Capital Gazette shooting, when the killer had a personal grievance against the newspaper. And for the Pittsburgh synagogue shooting when the murderer was on record as hating Trump. I’m surprised they haven’t figured a way to blame Trump for serial killer and Netflix phenomenon Ted Bundy.

A Rush to Judgment

What about Hollywood? The river of venom is endless. From late night monologues to dramatic plotlines to award show speeches to continuous tweets, nothing but contempt and accusations, mocking and socking and scorn. Trump supporters are baaaaaaaaaaad.

Smollett was one such person. He has spent the past few years spewing all sorts of hate toward Trump. Then he makes huge news all across the media claiming an attack by white racist, homophobic Trump supporters.

Despite the immediate and obvious dubiousness of Smollett’s claim, as I laid out last week, the media rushed to sing of the racial horrors of Trump’s America. Powerful leaders and presidential hopefuls raced to join Smollett’s chorus. Kamala Harris, Cory Booker, Nancy Pelosi to name just a few. The opportunity to trash Trump and his supporters was too golden to pass up. Justin Smollett got cast as Medgar Evans, Martin Luther King, the Birmingham school girls.

So, yes, S.E., watching Smollett’s hoax get blown to bits will prompt a loud and hardy “Yippee!” Yes, The Lie (in its third year running), exposed for all to see! (Again) Set the pigeons loose! Pop open a cold one! Vindication! Make American Media Eat Crow Again!

I make no apology for taking some joy in the epic backfire. Some.

But the giddiness is short-lived. Underneath, and far deeper, is grief. Sadness. A Chicago blues.

Think for a second: How cold, corroded and lost is your heart that you would pay to get beaten up at 2 a.m. in sub-zero weather in order to frame strangers with whom you disagree politically? Your masked assailants represented all Trump supporters. A hate crime pinned on innocent chests. Did you get into acting in order to act out something so destructive and hurtful to others? How can one lose so much empathy for your fellow man? How can one so easily and completely undercut those true victims of racial or homophobic attacks?

Is your Trump Derangement Syndrome so far gone, you think faking an attack doesn’t matter because “everyone knows they are all racist homophobes”? Are you that ill?

The Darkness this Reveals

So, was it a political act? A Chicago, Alinksy-style bit of theater to shine light on a “greater” alleged evil? Alinsky dedicated his work to Lucifer. Do you want to be serving the Father of Lies as well? What “empire” truly claims your loyalty?

Have you become so lost in fantasy as to not understand this act’s real world impact? Are you a casualty of a life spent in a world of pretend? Let alone a toxic entertainment atmosphere consumed with Trump hate?

Is this just a sad and cynical ploy for publicity? Empire denies you’re being written off the show. But are you worried about losing the gig? I know about the anxiety of being an actor. I married one. Are you so thirsty to maintain fame you’d play on Hollywood’s hatred of all things Trump and lap up the sympathy?

Whatever Jussie Smollett’s personal motive, brokenness is behind it. And we must pray for his healing. Pray that his false witness can be turned to true witness. Smollett is a gifted performer. I pray he will learn to use his God-given gifts for bringing harmony rather than furthering hate. I pray his next act is to seek forgiveness.

I also grieve at the utter corruption this episode has exposed. Here in this link is a montage of news coverage when the story broke. Note the crushing condemnation of America.

It seems, from all emerging evidence, that Smollett concocted a hate crime. Roseanne lost the show she created within hours of one bad joke on Twitter. What will the news media’s response be? Hollywood’s response? The response of Pelosi, Booker and Harris? Will we hear apologies? See self-reflection? Will anyone take a moment to wonder, “Again and again, this happens. Could it be we have Trump supporters all wrong?” Or, as Joy Behar noted after the Covington debacle in a rare moment of clarity, that “we’re desperate to get Trump out of office.” Too eager to believe.

However, I believe the evidence points to something even worse. An indifference to the truth. The ends justifying the meanness. Those who support Trump are fodder in a broader war, one where truth is an easy casualty to a revolutionary objective.

.@JussieSmollett is one of the kindest, most gentle human beings I know. I’m praying for his quick recovery.

This was an attempted modern day lynching. No one should have to fear for their life because of their sexuality or color of their skin. We must confront this hate.

Let’s remember that as a former prosecutor Harris has seen and tried countless cases. More than anyone, she surely knew Smollett’s story qualified at best as suspicious, doubly so when he refused to turn over his phone. Yet, like Obama embracing the “Hands Up Don’t Shoot” lie as tightly as he’s ever held his wife, she went all in with Smollett. All in for “an attempted modern day lynching.” For her own advancement and the advancement of radical left, she deliberately fanned the flames of racial tension in this country.

And so, Harris put a noose in the hand of Trump supporters.

I grieve because I know that short of divine intervention, the politicians will manipulate and the media will not learn its lesson. Media will forget Smollett as quickly as Virginia’s KKK-hood promoting, infanticide-touting governor. The hate for Trump is too great. The stakes of advancing the progressive agenda are too high.

And so, Americans, honest Americans, will continue being pummeled. At 2 a.m. in the dead of winter, at 2 p.m. in the heat of summer, in drive time, in prime time, not-ready-for-prime-time. And the CNN’s, office-seekers and social justice warriors won’t need to hire Nigerian extras to do the punching.

And yet, I do believe we can see that divine intervention. After all, this story is being exposed. Truth is emerging. Light overcomes darkness.

I speak often of “Snake News,” information distorted, manipulated or created in order to injure. I have also read the end of the story. The Snake responsible for leading so many, including Jussie Smollett, into deception, gets slain in the end.

Note to Empire: Jussie Smollett Was Not Exonerated of All Charges

2018 in Irritations, Inspirations and Amusements