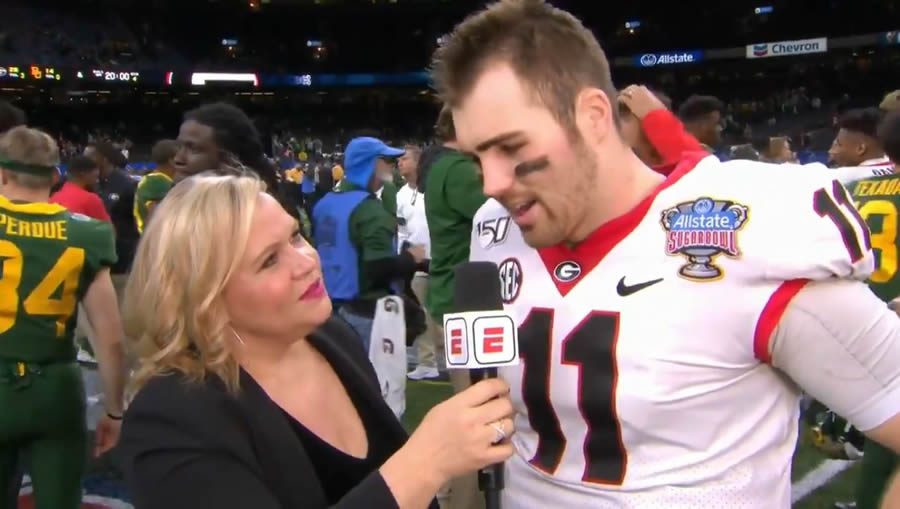 Last week, quarterback Jake Fromm led the Georgia Bulldogs to a 26-14 win over Baylor, throwing 250 yards and two touchdowns. He’s headed to the NFL, but Fromm isn’t letting that distract him from his focus on the Bulldogs — or his relationship with God.

After the Sugar Bowl win, ESPN’s Holly Rowe asked Fromm what he wanted people to remember about him if he did leave the Bulldogs. “I want to represent Christ the best I can,” Fromm replied. “I hope I can reach and influence as many people as possible. I’m thankful to play here. This university is amazing. To play here every single game, every single moment, it’s been a blessing.”

Late last month Rowe interviewed Fromm about the Sugar Bowl game and what to expect. She then told Fromm that he was the most positive person she’d met. She wanted to know why. Fromm didn’t hesitate. “It’s the Holy Spirit in me,” he explained. “I’m just trying to influence others and build relationships with others and hope they can see Christ in me.” Fromm’s answer nearly brought Rowe to tears. “That’s beautiful,” she said.

“It’s the Holy Spirit in me. I’m just trying to influence others and build relationships with others and hope they can see Christ in me.”

Georgia QB @FrommJake speaking on his faith during an interview with ESPN’s @sportsirenpic.twitter.com/pQedXUeUmv

A junior at Georgia, Fromm announced Wednesday that will enter the NFL draft. He is projected to be selected in the second or third round, Sports Spectrum reported.