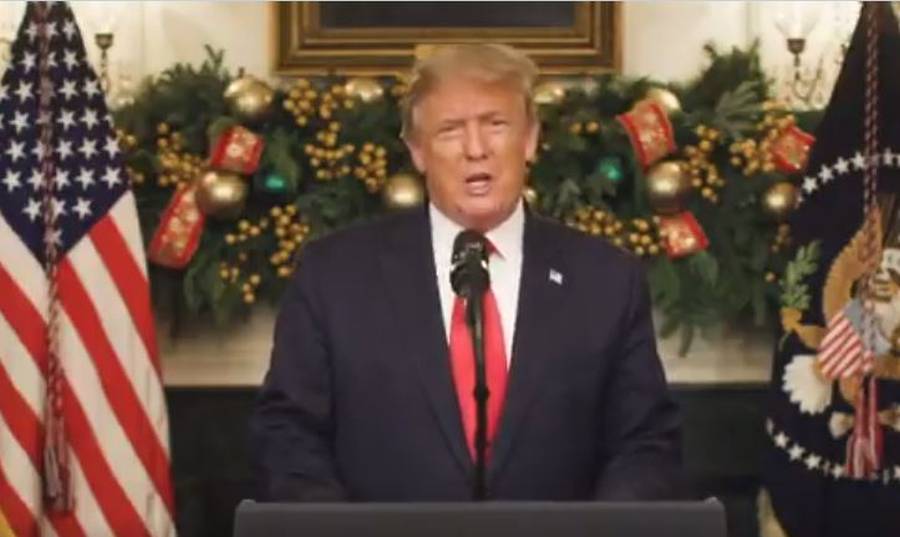 President Trump details why he continues to fight for election integrity while election fraud comes home to an anti-Trump Georgia election official.

The fight for a fair election count rolls on.

President Trump insisted again Tuesday night that the 2020 contest was stolen, and called on Americans to raise their voices and “stop the theft of the presidential election.”

Statement by Donald J. Trump, The President of the United States

In the nearly 10 minute long video, Trump said one of his solemn duties is to protect the “sacred right to vote.” “Our elections must be fair, they must be honest, they must be transparent, and they must be 100% free of fraud.”

“We won this election by a magnificent landslide, and the people of the United States know it,” said the president, “All over, they’re demonstrating, they’re angry, they’re fearful. We cannot allow a completely fraudulent election to stand.”

He then laid out some of the election “facts that every American needs to know.”

For example, the “massive and statistically inconceivable vote dumps” in the middle of the night in swing states. The absurdly low mail-in ballot reject rates that “prove that hundreds of thousands of illegitimate votes were counted in the key states.” The fact there was no “meaningful attempt to verify citizenship, residency, identity, or eligibility for mail-in ballots.” Witnesses testifying to seeing thousands of pristine ballots with no creases or folds … all for Joe Biden.

Said Trump, “If this egregious fraud is not fully investigated and addressed, the 2020 election will forever be regarded as illegitimate and the most corrupt election in the history of our country.”

Georgia’s Elections Manager Gabriel Sterling has been dismissive of the idea there was fraud involved in the Georgia election. In fact, Sterling, who has a history of anti-Trump comments, slammed Trump and Republicans in a December 1 press conference over efforts to challenge the vote.

However, Sterling’s tune changed when the fraud hit his doorstep. Sterling says the woman he bought his house from used his address to secure and submit an absentee ballot.

He’s filed an official challenge to “stop her from casting an apparently illegal vote. I’d show you his tweet about it, but it’s now blocked. But here’s a link to the Fox5 Atlanta story about his challenge.

The woman had the Georgia ballot sent to her Maryland address. Then mailed in the ballot. She was not living in the Georgia house listed in her voting records.

“That would be illegal voting,” said Sterling.

Now, is Sterling going to argue he’s an isolated case? It’s a foolish argument, given what was found in Georgia by Matt Braynard and others. Only 11,799 votes separate Joe Biden and President Trump.

It is also mind-numbing to look at just how the number of absentee ballots, both counted and outstanding, kept changing in Georgia. And of course ballots continued to magically appear until Biden took the lead. Gateway Pundit has the rundown.

Also, the state’s Senate Judicial Committee has issued a scathing report on election anomalies in Georgia. They’re calling on the state to rescind its certification of Joe Biden as the winner.

The Georgia House Governmental Affairs Committee was scheduled to hold another hearing on election integrity Wednesday.

Wouldn’t the state’s own Election Manager Sterling, whose own crib was used to steal a vote, make a glorious witness?

Peter Navarro has expanded his epic “Immaculate Deception” report detailing the “6 key dimensions of election irregularities” with some new information out of Michigan.

According to Navarro’s, there are nearly 400,000 questionable votes in Michigan.

This doesn’t include “at least 305,000 additional ballots in question” due to “voting system irregularities” … aka Dominion.

How many repetitions of “nothing to see here” do we accept before we believe there’s something foul in plain sight?

Memo to War Room on Michigan by Natalie Winters