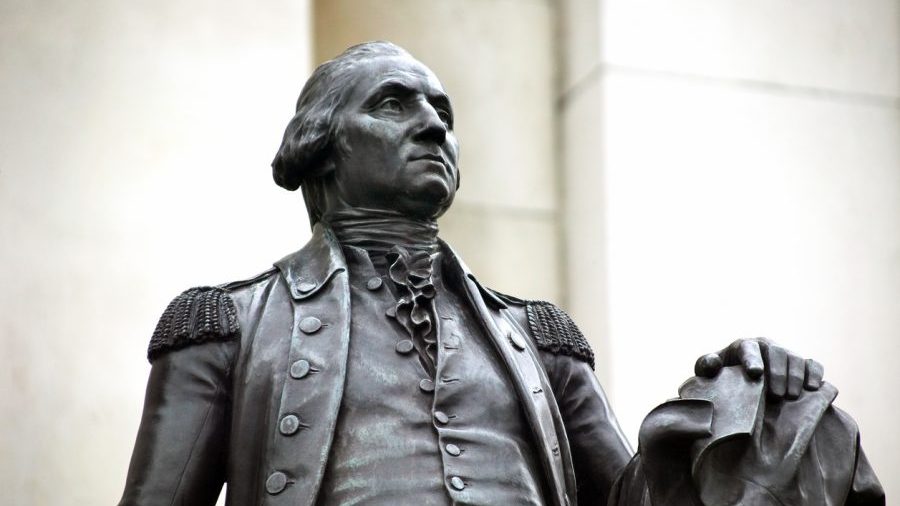 Last Thursday night the statue-topplers tore down another statue of the father of our country, just after they defaced it. This statue of George Washington had stood in Grand Park near Los Angeles City Hall since 1933. The war on America as founded continues unabated.

A couple of months ago, political cartoonist Michael Ramirez had a brilliant piece showing a statue of George Washington with this description:

On the other side of the drawing was a caricature of a woke social justice warrior. His name was “Imah Luzer.” And his achievements were also listed:

The Imah Luzer character holds a rope, lassoed around the bronze likeness of Washington, which he is about to yank down. Today it seems that many of those who have accomplished nothing positive are trying to tear down reminders of those who have accomplished great things, including heroes of the past. To borrow a phrase (from a different context) from Pulitzer-winning historian Barbara Tuchman, this is “a barbarian’s gestures of anger against civilized things.”

Washington is a genuine hero, but some today are making him into a villain. The reason, of course, is slavery.

George Washington grew up as a gentleman farmer in colonial Virginia and was a fourth generation slave-owner. By the end of his life, he had decided slavery was immoral and so, at his death, he freed his slaves and made provision for them. But there is no atonement to the Left. There is no forgiveness of sins. Because George Washington owned slaves, he is unforgiveable to these woke social justice warriors.

Nonetheless, there are many warnings that George Washington made that I think modern Americans could learn from, including these mobs of woke social justice warriors.

First of all, there is the matter of gratitude to God. The “woke” mob seems to operate from a sense of entitlement. The world owes them everything. Washington operated from a Christian perspective, where he asked for God’s help at virtually every turn and where he thanked the Lord for His help.

Washington marveled at how many times God helped the American cause. In 1778, he wrote to one of his military leaders, “The hand of Providence has been so conspicuous in all this, that he must be worse than an infidel that lacks faith, and more than wicked, that has not gratitude enough to acknowledge his obligations.” That is, obligations of gratitude.

The Twin Pillars of Human Happiness

Today, instead of gratitude we see a whole generation of ingrates. No wonder they disrespect the flag and kneel in protest against the National Anthem. To them, being an American is more of a curse than a blessing.

But George Washington experienced repeatedly what he believed was the hand of Providence in helping his ragtag army of ill-fed farmers and merchants as they faced what was the strongest army and navy on earth at that time.

He said in his First Inaugural Address that our first obligation was to thank the Lord that we even became a nation. “No People can be bound to acknowledge and adore the invisible hand, which conducts the Affairs of men more than the People of the United States. Every step, by which they have advanced to the character of an independent nation, seems to have been distinguished by some token of providential agency.” Without God’s help, we would not have been able to create this government.

And what is this government? Washington puts it this way: It is a government instituted by “the People of the United States” themselves. If we don’t like things as is, we are free to change them.

I don’t think I’ve ever seen America in a more miserable state than it is at present. We would do well to learn from George Washington, rather than to desecrate his memory.

In his Farewell Address, Washington warns that we should do everything to protect “religion and morality,” which he calls twin pillars of human happiness. He also warns against letting political factions rule the day.

But I think probably the greatest single admonition from our first president comes from his Circular to the States, written in June 1783.

Washington ended this letter to the governors of the 13 states with a prayer that we would all learn to imitate “the Divine Author of our Blessed Religion,” meaning Jesus. And he says that without imitating Jesus, we can never hope to be a happy nation.

I don’t think I’ve ever seen America in a more miserable state than it is at present, with all the riots in the streets and strangers hurting (in some cases, killing) strangers.

We would do well to learn from George Washington, rather than to desecrate his memory.