George W. Bush Impersonator: ‘There’s a God-Sized Adventure’ on the Other Side of Fear

John C. Morgan is an impersonator and comedian. In his new book War on Fear, Morgan explains how he became free of fear and now lives an abundant life. 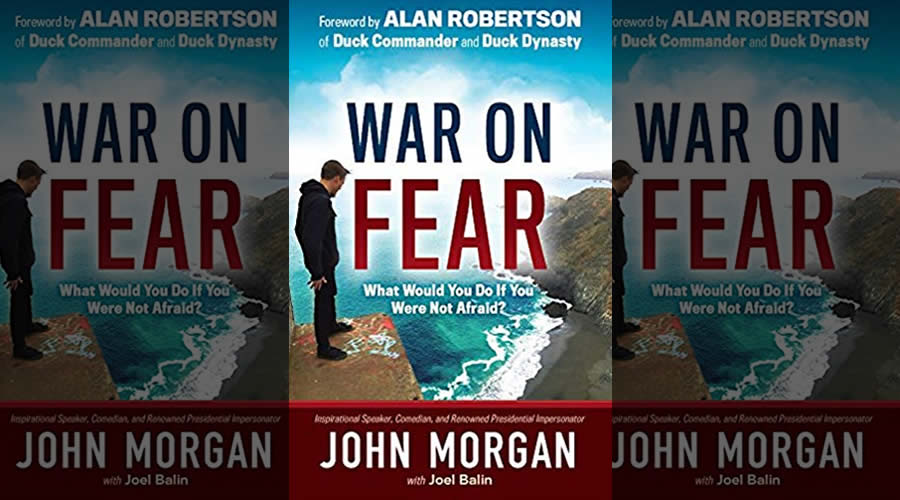 On March 24, LIFE Today will host George W. Bush impersonator John C. Morgan to talk about his new book War on Fear: What Would You Do If You Were Not Afraid? The Stream’s Nancy Flory sat down with John to talk about how he overcame his fear. He also offers advice for those stuggling with fear.

“You don’t have to let it rule your life,” he said. It’s about trusting God to take care of us through the tough times.

At five years old, John C. Morgan entered school with a heart full of expectancy and exuberance. Too much exuberance. Soon, other kids started ridiculing him.

John couldn’t take the rejection. He allowed fear to become his “guardian.” He’d ask “What’s going to get me the least rejected?” he told The Stream. “I didn’t form opinions. I only formed judgments of what other people’s opinions were so that I could match it.” He wouldn’t let anyone get too close.

As a teenager, John embraced the “sex, drugs and rock and roll” culture of the 70s “with a vengeance.” There he found acceptance.

Ironically, he loved performing for people. That didn’t scare him. He acted in plays and joined a drama group. But it wasn’t until John gave his life to Christ that he had a breakthrough.

Now he’s a Christian comedian, singer-songwriter, performer and an impersonator — now working on his impersonation of Donald Trump. His most recent book, War on Fear, explains how to live an abundant life free of fear.

When John was a teenager, his mom became a born-again Christian. “We saw a night and day change in her. She became filled with joy. And I began to realize that Jesus was much more than I had ever thought He was.” In addition, a few high school friends became serious Christians and were also filled with joy.

He prayed for three years that God would make him willing to give up his life of drugs, sex and rock and roll. When he was 18, his mom took him to church, where evangelists Charles and Frances Hunter were speaking. He answered the altar call and gave his life to Christ. It was March 5, 1975.

How to Recognize Fear

Over the years, John has come to recognize when fear tempts him. “Fear impacts me in that every time I sense a challenge to go beyond where I have been in faith, I’m always confronted with what seems to be an opposite suggestion of reality.”

Fear starts with a thought. “You want to do something that in your mind you might think is risky and then suddenly fear is right there to tell you why you shouldn’t do it.” he explains.

Fear usually pops up with worst-case scenarios. We recognize fear when our sentences begin with “yeah, but,” or “what if?” We ask self-defeating questions like, “Yeah, but if I do that this negative consequence will happen,” or “What if I do it and lose my job?” Fear keeps people from moving forward in faith.

Fear just creates more fear, John explains. “You know, if you give in to fear, it won’t be satisfied. It’ll bring five friends with it until it consumes your life. And one of the things I say in the book is, like it or not, fear is already at war with you. The sooner you recognize it and engage the battle the sooner you’ll be free.”

When we refuse to let fear stop us, we can have amazing encounters with God. “It’s a fun, fun, adventurous journey.”

God delights in people just the way they are — fears and all. “However, He invites you to a wonderful adventure and encourages you to engage in the battle to overcome fears that hold you down, that you can become more and more like your Savior, Jesus Christ.”

When we overcome our fears, we can start to live life abundantly. “There’s a God-sized adventure awaiting you on the other side of fear.”