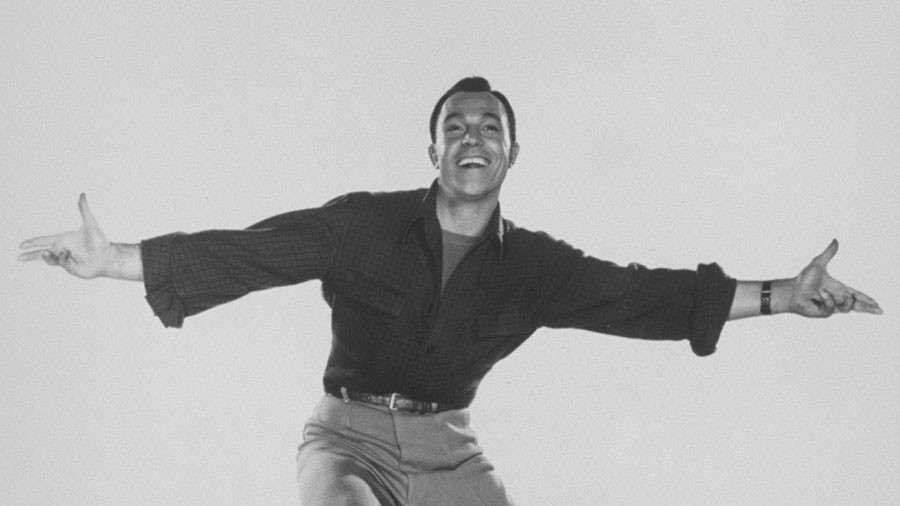 Slate authors Aisha Harris and Daniel Hubbard study that question in-depth, even offering a video comparing clips of the two. And though they eventually conclude that there can be only one Gene Kelly, they don’t sound entirely convinced of their own point. They dwell heavily on Tatum’s dancing talent plus his Kelly-like build and physicality to show that, if he isn’t actually Gene Kelly, he’s as close as one can get.

In their new release, Hail, Caesar!, the Coen brothers take advantage of this widespread perception by casting Tatum in a “Gene Kelly” part. His small but showy role is that of a movie star doing a tap routine, dressed as a sailor. (Kelly made two “sailor films,” Anchors Aweigh and On the Town.) But for many of us who know and love Gene Kelly’s work, the supposed casting coup is a misfire.

First of all, let’s be honest: While Channing Tatum is a good dancer, he’s not as good a dancer as Gene Kelly. In particular, he’s not as good a tapper. He admits to having only been tapping for about three months, to get ready for this role. And to his credit, it’s clear he worked very hard: He executes the steps with correctness and polish, in time to the music, and he even achieves a graceful leap or two. But when he’s on the ground rather than in the air, his tapping is labored, not buoyant like Kelly’s. And for all his much-vaunted physicality, Tatum doesn’t throw himself wholeheartedly into the dance. That was Kelly’s trademark — whatever a number was like, however light or even silly it might be, he always gave it everything he had.

To be fair, though, the dance itself works against Channing Tatum. It has no spark, no excitement; it doesn’t build to anything … except for a few sexual sight gags involving Tatum and his fellow male dancers. That’s the real point of the number, in fact. It’s not really about celebrating old musicals. It’s about imposing on them our modern idea that you can’t have a bunch of men dancing together without a little wink wink, nudge nudge going on.

Which brings me to the bigger reason that Channing Tatum is not Gene Kelly.

In his most hyped dancing roles — in the Magic Mike movies in which he played a stripper, and now in Hail, Caesar! — Channing’s dancing is all about sex. He’s there either to titillate the ladies with his dancing, or send off homoerotic vibes with his dancing. He rarely seems to be there just for the dancing.

Now, no one could say there wasn’t a sexual element to Gene Kelly’s dancing. (Ask any of us women, even those born generations later, who spent our adolescent years going giddy over him.) But that was just one part of the whole picture, which also included style, personality, wit, and most of all, a genuine love for dance. Kelly spent a significant portion of his career dreaming up newer and better ways to capture dance on film, to introduce great dancers to the broader public, to create and perform film dances that would leave an indelible impression. He was passionate about his art and he wanted to share that passion with filmgoers.

More than that, Kelly had a lot of ideas about dance as a masculine art form. He made a documentary called Dancing: A Man’s Game, and he said things like, “If a man dances effeminately he dances badly—just as if a woman comes out on stage and starts to sing bass.” (In light of statements like that, it seems somewhat ironic now that Kelly was a lifelong Democrat. Today, many of his fellow liberals look askance at such subversive beliefs.)

But when was the last time we saw a man dance onscreen like that? Even allowing for the fact that movie musicals are made far less frequently than they used to be, it’s been a while.

Perhaps the Coens were trying to rib Kelly posthumously by undermining his ideal of masculine dance, even as they purported to honor what he did. Or maybe they didn’t give it that much thought, and their lampooning of his dancing simply fit with the general tone of Hail, Caesar! — a knowledgeable inside tour of the world of classic film, which nonetheless failed to display a deep, genuine understanding and appreciation of what made the films work.

But in any event, all that they achieved here is conclusively demonstrating that Channing Tatum is not and never has been Gene Kelly. He is instead a symbol of a generation that, in its insistence on sexualizing everything, has lost any sort of a vision of real, well-rounded masculinity. And we are indescribably poorer for that.

Make Men Masculine Again: Demonizing Masculinity is Not the Solution

What’s Happening to Men is Alarming for Everyone