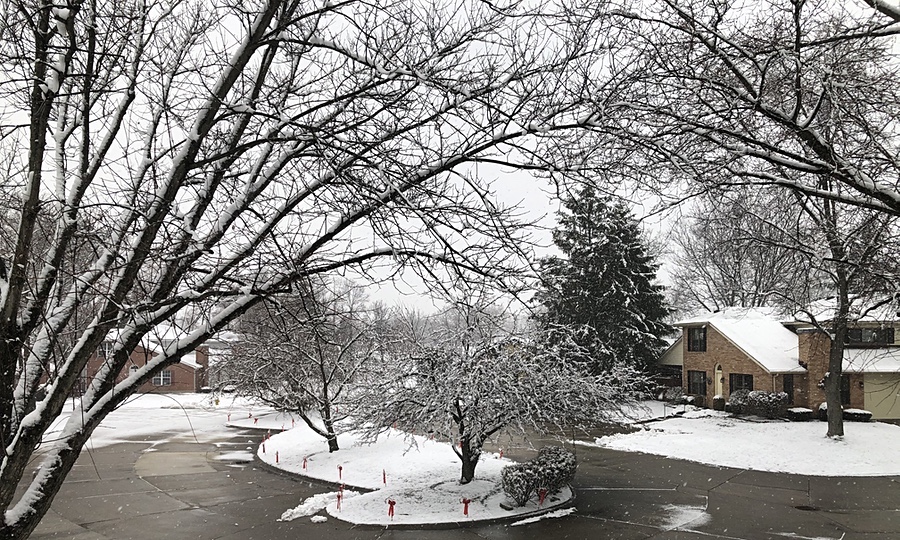 The view out our upstairs window on the morning of December 17, 2019.

Nothing beats the view out the upstairs window here where I live, following a snowfall. It’s even better during the morning twilight hours, just before the sun rises. December is the best time, with our condo association’s Christmas decorations (“Candy Cane Lane”) lining the grassy island. More snow is falling as I write. Christmas is the season for “Peace on earth, goodwill toward men,” isn’t it? Except there’s a problem with that.

I’ll come to that in a moment. From here, though, especially today, it really is a peaceful world. I took a slow two-mile walk in the woods behind our home, stopping often to snap pictures. I wasn’t at all surprised to see a white-tail doe bounding away from me. The monarch butterfly flitting above the path caught me off guard, though, this time of year. Maybe it was a viceroy moth. Maybe I saw it wrong, being a few yards away. It wasn’t as peaceful as it looks, though. It’s a very narrow woods. At one point the path travels the edge of a noisy construction site to the south, and a portion of it parallels a busy freeway to the north. I didn’t take those pictures. I’d rather keep it peaceful-looking.

Nothing Is As Peaceful As We’d Hope

Nothing is quite as peaceful as we’d hope, or if it is, it doesn’t last. This morning I read Psalm 104 in my devotions. It’s the nature psalm above all others, beautifully picturing God’s loving care for His creatures. God’s creatures look to Him, says verse 27, “to give them their food in due season.” In this He displays His glory (verses 24 and 31):

O Lord, how many are Your works! In wisdom You have made them all…

May the glory of the Lord endure forever;
may the LORD rejoice in His works.

Yet as with everything in life, the picture is mixed. This peaceful nature psalm closes with a realistic reminder of the rest of reality (verse 35a):

Let sinners be consumed from the earth,
and let the wicked be no more!

Throughout all the Psalms we see the same mixed reality. In some the psalmists lament the evils that surround them. Elsewhere they praise God for His glory, His power, and His deliverance. Sometimes their impatience with God shows, as they remind Him of promises He’s made, and ask Him, “How long, O Lord?”

Life is like that. The Stream’s home page is like that. Even Christmas is like that. I spoke of a problem in the first paragraph above. It’s a misquote. The passage (Luke 2:14) in the best manuscripts actually says, “Glory to God in the highest, and on earth peace among those with whom he is pleased.” The shepherds and the Magi worshipped Jesus; King Herod massacred babies in an effort to get rid of Him.

It really isn’t goodwill to all. God has enemies. God’s people do, too; though we do well to remember that we have a lot in common with God’s enemies. We, too, were caught in sinful rebellion until we were reconciled to God by the death of His Son (Rom. 5:10), and until we accepted His gift of love to us in Christ. So it makes more sense to pray for them (Matt. 5:43-47) than to condemn them.

The Increase of His Government and of Peace

Yet reality remains mixed: beauty and noise, calm and conflict, life and death. Christ came into this confused, mixed-up world to bring us to life in Him.

For to us a child is born,
to us a son is given;
and the government shall be upon his shoulder,
and his name shall be called
Wonderful Counselor, Mighty God,
Everlasting Father, Prince of Peace.

Of the increase of his government and of peace
there will be no end,
on the throne of David and over his kingdom,
to establish it and to uphold it
with justice and with righteousness
from this time forth and forevermore.

The zeal of the Lord of hosts will do this.

Someday the hope of peace will be fulfilled. God’s enemies will be defeated. Righteousness will be restored. His followers will enjoy life in Him, unmixed with tears or conflict, forever.

That day will come. Christmas was just the beginning.