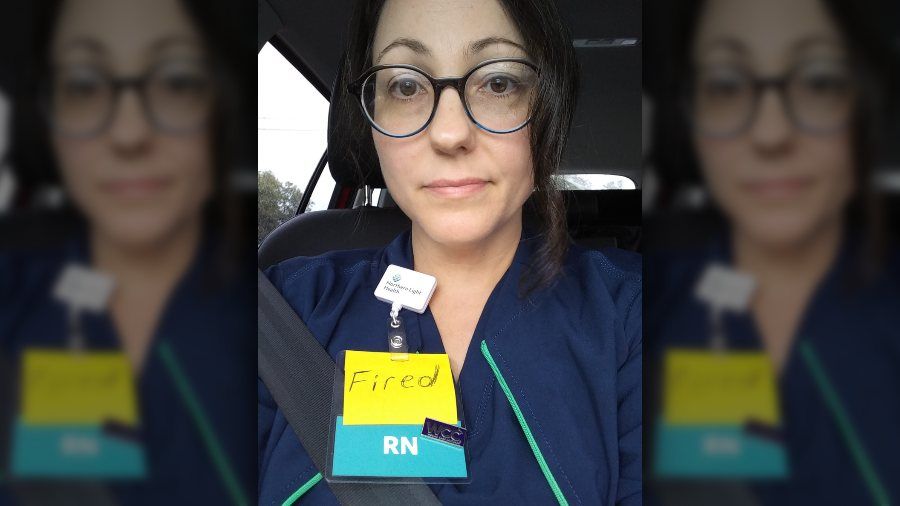 She left a good job, beautiful mountain views and a stream running through her backyard. She then said goodbye to the homestead she thought she would pass down to her seven children. After praying about the need for health care workers in an under-served part of the country, 42-year-old Stephanie Grandy made a big move in the middle of a global pandemic. Along with her husband, James, and two of her seven children, she moved from beautiful Asheville, North Carolina, to the rural town of Presque Isle, Maine, in November 2020.

At first, life seemed like it was falling into place. The Grandys’ North Carolina house sold within one day for a cash offer, her husband started his nurse practitioner program, and Stephanie signed a three-year contract with relocation bonus at Northern Light Hospital where she went to work as a wound care nurse.

Then the unexpected happened. Even though rural northern Maine was in dire need of nurses, within nine months of taking her new job, Stephanie was out of work.

On August 24, 2021, Stephanie found herself being escorted out of the hospital to the parking lot by security guards. Just moments before, she was informed that she was being “taken off the schedule.” Terminated. Not for a crime or incompetence or not showing up for work, but for violating a top-down policy being imposed on all health care workers in Maine from Governor Janet Mills herself: “take the jab or lose your job.”

Stephanie’s world was turned upside down in an instant. She was left shocked and confused. Only a month prior, the hospital was accepting religious and medical exemptions and indicated that they would honor approved exemptions even after the vaccine received FDA approval. Stephanie turned in her exemption forms early along with a four-page letter detailing her beliefs and circumstances. Rightfully, she thought she was protected under civil rights afforded to all Americans under the Constitution.

Before the vaccines were even developed, the Lord began speaking to the Grandys, who are Messianic Jews, about not taking the vaccines when they became available. “God didn’t say exactly why,” Stephanie explained. “But we would get this sick feeling at the thought of injecting the vaccine into our bodies.

On August 12, 2021, when Governor Janet Mills issued a mandate requiring all health care workers in Maine without exception to get vaccinated against COVID-19, Stephanie was put between a rock and a hard place. While she held out for a miracle, Stephanie realized that she would be fired. Shortly thereafter, HR sent Stephanie an email confirming her fears: get vaccinated or be terminated. The same day, Stephanie sent back her appeal to no avail.

On August 24, 2021, Stephanie was brought into the HR office where she was informed of management’s disapproval of her outspoken views protesting the mandate on the local news and social media. They took her off the schedule for seven days to allow time for her to reconsider her noncompliance with the hospital’s vaccination requirement. If by August 31, she was not vaccinated, she would then be terminated.

What happened next made no sense. As soon as Stephanie walked out of the office, a security officer was waiting for her. He escorted her to clean out her office, turn in her badge and keys, and then proceeded to walk her out to her car in the parking lot. To add insult to injury, Stephanie was later asked to pay back 75% of the relocation bonus for not fulfilling the terms of the agreement.

Around that same time, James also refused the vaccine, and his fall clinical rotations were cancelled. Within days, both husband and wife were out of a job. Real Americans with real religious beliefs who now don’t have real jobs.

Taking it to Court

Today, the Grandy family is hoping and praying that the governor’s mandate will be overturned in the courts. On behalf of more than 2,000 health care workers in Maine, Liberty Counsel, a Christian public interest law firm, has filed a lawsuit against Governor Janet Mills, health officials of the Maine Department of Health and Human Services, Maine Center for Disease Control and Prevention and five of Maine’s largest hospital systems.

Governor Mills and state officials explicitly and illegally claim that federal law does not apply to the state’s health care workers, and no protection or consideration will be given to individuals’ religious beliefs. Health care workers must show proof of vaccination by October 1 or face immediate termination. Furthermore, Mills threatened to revoke the licenses of all health care employers who make exceptions to her mandate.

Governor Mills believes she has the authority to cast Title VII of the Civil Rights Act of 1964 and the First Amendment to the curb with her one-size-fits-all edict for health care workers.

In the meantime, life must go on. For now, the Grandy family has decided to stay in Maine and “stick it out for as long as we can until the Lord moves us again.”

She and her husband are examples of modern-day bravery, living out Thomas Jefferson’s words, “When tyranny becomes law, resistance becomes duty.” To other Americans facing termination for holding to their sincerely held beliefs, Stephanie says, “Stay strong. Keep your hands on the plow. Don’t turn back. Lot’s wife turned back and turned into a pillar of salt. Just keep moving forward. Peter took his eyes off Jesus and sank. We’re going to keep our eyes on the Lord and trust in Him. He’s got this. He’s still on the throne. He’s in control and He will provide.”

Annemarie McLean is a writer for Liberty Counsel, a nationwide public interest civil liberties law firm committed to restoring the culture, advancing religious freedom, protecting the unborn, and strengthening the family. In 2012, she  founded 3D Missions, an international outreach taking the Gospel to the nations through the performing arts, and co-founded Brave & Beautiful, a platform empowering young women to live, love, and lead courageously. She holds a journalism degree from Oral Roberts University, with graduate work in organizational leadership at Palm Beach Atlantic University.