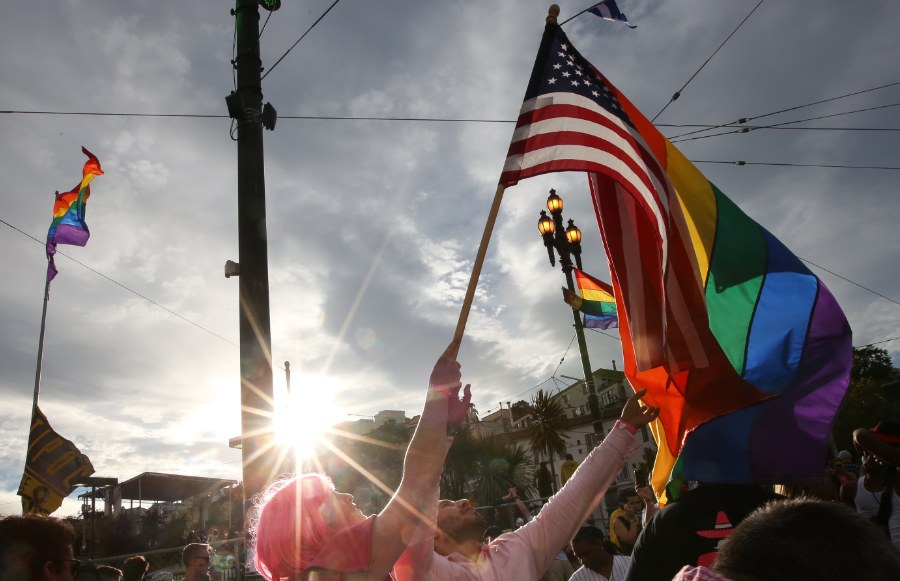 In this June 27, 2015 file photo, a woman and man wave a rainbow pride flag and an American flag in San Francisco, Calif., during a celebration following the Obergefell Supreme Court decision.

Last month, California LGBT activists were enraged by a decision from a member of the California Assembly who is also chairman of their legislative LGBT caucus. Assemblyman Evan Low (D-Campbell) pulled controversial bill AB 2943 from consideration, only six months after he introduced it. AB 2943 would have made it illegal for people of any age to receive professional help for unwanted same-sex attractions, if the counseling discussed the possibility of change.

One media report stated that Low “pulled defeat from the jaws of victory” when he abruptly tabled his proposed law. The measure had passed the California Assembly and Senate, which have strong Democratic majorities. For author Nancy Pearcey, the contentious drama over free speech and sexuality illustrates why people of faith particularly must be prepared to address these issues.

“We just dodged a bullet,” says Pearcey, who teaches at Houston Baptist University. “It would’ve essentially outlawed a Christian sex ethic. Once the law changed, books and curricula with that message would have been banned — while Christian schools and churches would face government censure.”

Pearcey spoke last week at Family Research Council, a faith-based public policy group in Washington, D.C. that advocated against the California bill. Her new book Love Thy Body discusses current trends impacting human identity. In an interview following the event, she spoke about recent events and their implications.

Victory for Free Speech in California

The Stream: A recent bill in California regarding free speech and sexuality issues recently failed to pass. Could you walk through what happened?

Pearcey: California was about to pass AB 2943, an amendment to the state fraud law. Specifically, it outlawed goods and services that communicate a message that sexual orientation or gender identity can change. While presented as a bill against conversion therapy, it was written so broadly as to outlaw paying for certain books, lectures, courses, curricula or conferences. Essentially, it applied to anything that taught the biblical sexual ethic that one can change. There’s no guarantee, but “such were some of you” as First Corinthians puts it. It would have outlawed my book in the State of California.

To their credit, Christians in California really mobilized on this one. One of the staffers said they had never seen so many people speak in opposition to any bill in their career. Homosexual ministry groups, pastors and churches all spoke up. But it was going to pass. It sailed through the committees, through the California House and Senate. Was Governor Jerry Brown going to veto it? No, he was going to sign it.

Yet to his credit, the sponsor of the bill Evan Low met with several pastors, churches and Christian colleges. At the very last moment, Low decided not to send it to the Governor’s desk. He pulled it. After talking to Christians in his state, Low said: We’re too divided on this.

He promised to be back, but he wanted to do a lot more “softening up” of Christian churches and leaders. So that was a bullet dodged.

The Stream: How do you respond to those who say evangelicals like you are ‘obsessed’ with LGBT issues? Why not ‘live and let live’?

Pearcey: On a personal level, of course we accept people who are different from us. But we are not the ones who are obsessed, rather we are being forced to respond to it.

”When the law is passed, you’re not going to escape. It’s going to affect everybody.” – Prof. Nancy Pearcey

On my Facebook page, I often post news items related to sexuality issues. I had a very aggressive gay activist interact with me for a whole year—which I actually appreciated.

He kept asking that question: Why are you guys so obsessed? I replied, Wait a minute. All of these news items are being initiated by LGBT activists, not by us. We are just responding to it. As a nation, we have to allow for diversity on these issues.

Unfortunately, I don’t think lawmakers really know how to do that right now. Christian universities, schools and churches want to live according to their core convictions. Really, every American who cares about human liberty needs to educate themselves on these issues. We are going to have to really lobby our lawmakers on how to craft laws that allow for diversity and freedom.

The Stream: When are children today being exposed to alternate viewpoints on sexuality?

Pearcey: Kids are facing these issues now at a very young age. In Love Thy Body, I give an example of an 11 year-old girl who was asked by a female classmate to be her girlfriend. At eleven, she’s having to decide if she’s lesbian or not! Those are questions adults today never faced until they were teenagers.

Another friend told me about taking her daughter to a physical. The doctor asked, So do you think you’re a girl or a boy, or do you not know yet? The girl was five years old. At this point, parents are forced to deal with it. I don’t think we have a choice anymore. The “gender unicorn” is promoted down to kindergarten in some places.

Teacher friends,
If this comes up at your school & there are discussions about implementing it into curriculum, please, for the children, block it! It is not only un-scientific, it is ANTI-scientific & causes far more harm than good. #GenderbreadPerson #GenderUnicorn #gender pic.twitter.com/ApLtCnt0WA

In a recent news story, a woman shared about her elementary school student. She said, My child came home very confused. He couldn’t understand why the teacher kept saying there’s no such thing as boys and girls. The mother had to explain where this was coming from.

Our kids are getting these questions in elementary school and younger. The issue now is, how can we equip parents quickly to have answers and ways to explain these things to their kids.

The Stream: These are complex debates with profound tensions. Could you underline why believers should seek to understand these trends?

Pearcey: Because it affects all of us when laws are changed. That is what happened on proposals to outlaw conversion therapy for minors. As soon as California passed it, some 10 or so other states immediately passed laws as well. Don’t think it’s going to stay in California.

When I posted about the recent California law, people made light of it. They said, You know, California — they’re crazy. But you can’t just dismiss it like that. This bill was based on model legislation being put out by gay activist groups. Other states are looking at the same model legislation, and they’re ready to go as soon as it passes in California.

Under laws similar to AB 2943, anything that communicated a Christian view of sexual orientation and gender identity would have been outlawed. Where I teach, Houston Baptist University, could not have offered courses on these topics. Already I heard from Christian therapists in California, saying it was going to outlaw 20 percent of their practice [which] was to people with same-sex issues.

When the law is passed, you’re not going to escape. It’s going to affect everybody. Therefore, we all have to stay informed and involved.

The latest work by Nancy Pearcey, Love Thy Body: Answering Hard Questions about Life and Sexuality is now available online and wherever books are sold. Watch her recent talk at Family Research Council.