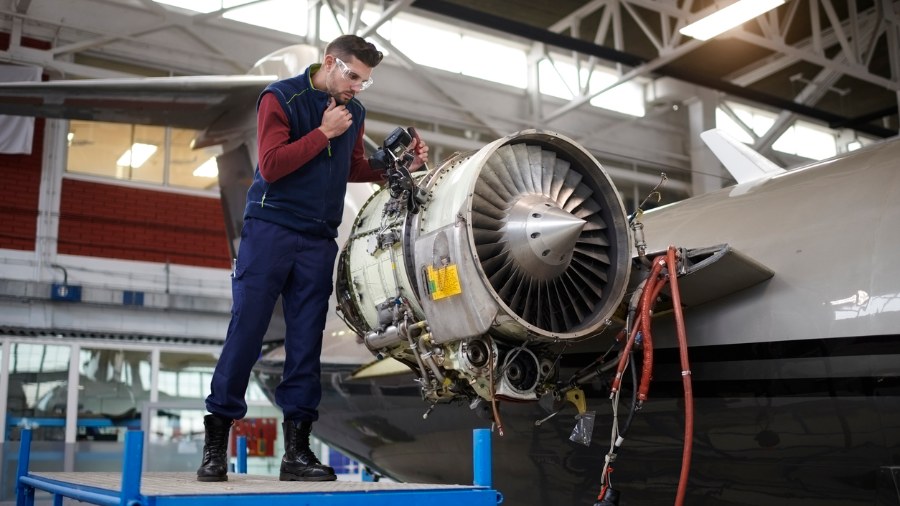 The catch is you need to study aviation maintenance. Wichita, Kansas, after all, is the Air Capital of the World. More people than ever are flying, but not enough people are learning about the production and maintenance of aircraft. To address this shortage, WSU partnered with local industry to try something new. Fueled by a one-time $500,000 grant from the Wichita Community Foundation, WSU Tech would see if people would relocate to Wichita and become aviation mechanics if financial barriers were removed.

Incoming students are asked to complete the FAFSA. The Wichita Promise Move serves as a last-dollar scholarship. That means students don’t lose whatever federal funds for which they qualify.

How big of a market is it? Textron announced last week that it hopes to hire at least 1,000 people this year.

How big of a market is it? Textron announced last week that it hopes to hire at least 1,000 people this year. They hired the same number last year. Spirit announced in December that it needed an extra 1,400 new employees.

But it’s not just a Wichita thing: Boeing forecasts that North America will need another 189,000 aviation technicians between now and 2037.

The Promise Move scholarship comes with guaranteed job interviews. Last year every student who received the scholarship was hired by one of the local aviation companies. These are good jobs, too: The Bureau of Labor Statistics pegs the 2018 median pay in this field at $63,060 per year. That’s north of median household income. All that for a job accessible through a 7-week program. That’s a lot less than 4 years. And a lot less expensive, too.

A free program, relocation, a weekly stipend, guaranteed interviews, personal career coaching, the strong likelihood of a job, and the possibility of a signing bonus? The ads worked. In its first year, 1000 people applied. Funding only permitted 50 to be selected. Just 9 of these 50 were from Kansas. The other 41 came from 19 other states.

In its second year, WSU Tech had to use internal funds. They were able to offer scholarships to 47 students from 15 states. The cost came to about $8,000 per student. WSU Tech is now trying to raise money to continue the program. They plan to collect data on the success of graduates as they enter the work force. That way they can show potential donors the transformative impact of their program.

I wonder if the local aircraft companies might consider footing the bill. If you need 1,000 workers per year, you’d think $8,000 per employee would be a modest recruiting fee. It’d be easy to factor this cost into the starting salary. Boost the workers’ pay 1-2 years out once they’ve proven themselves.

Not Just a Blue Collar Thing

Recent reports say there are something like a million more job openings than unemployed workers. If you’re trying to hire, and you can’t find people who are interested let alone qualified, that’s a major productivity hit. Could we see more companies doing what these aviation outfits are doing in Wichita?

Everyone’s talking about how automation is going to dislocate industries. But the truth is it will create many new opportunities. Consultants at Bain & Company are calling on “career-connected learning programs” to address the “mismatch between the skills and experiences required to succeed” in jobs of the future and “the capabilities we are developing in our students.” The idea is to change the paradigm from study-then-work to study-and-work. And think certificate instead of degree.

Provocatively, the Bain consultants argue that a bachelor’s degree is not essential for most good jobs. What’s a good job? One that’s attractive and accessible. Attractive: Pays enough and is stable. Meaning there’s a growing demand from employers and little vulnerability to automation. Accessible: Requires less than a bachelor’s degree.

So where are these good jobs? Roughly half are in four key industries: Healthcare, professional services, finance and insurance, and manufacturing. Look for career-connected learning programs to spring up in these fields.

Rather work with your hands? Apply for the Wichita Promise Move or a program like it.