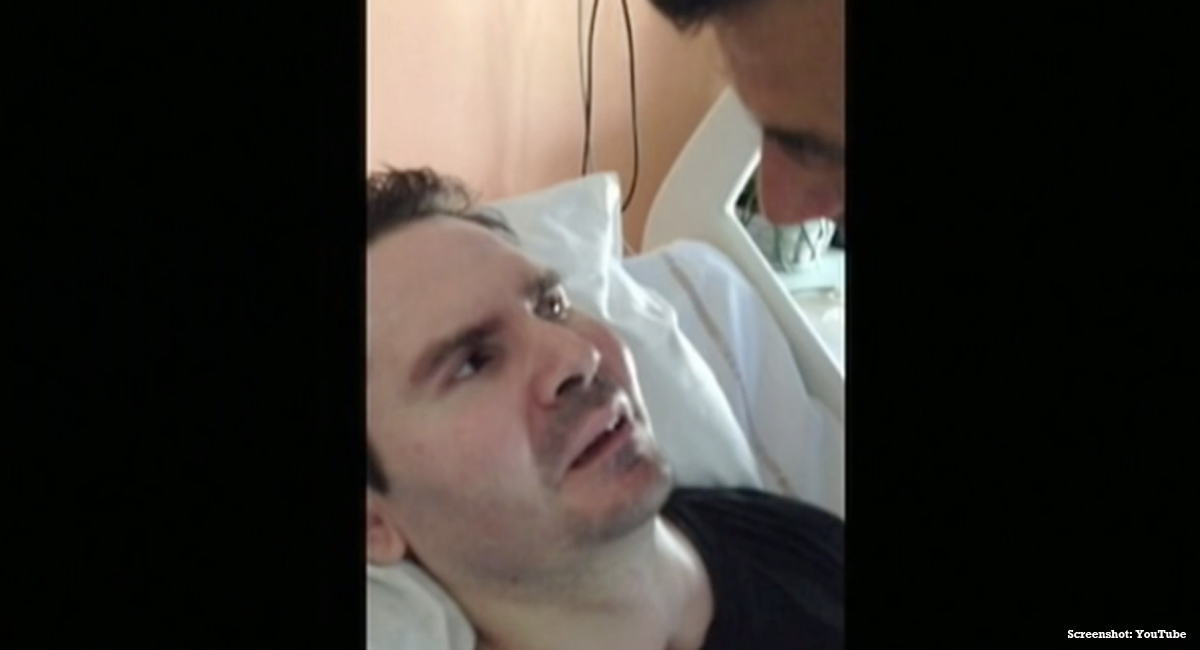 The Stream has already reported on the horrible case of Vincent Lambert. (He died early today.) As Michael Cook wrote:

[T]he 42-year-old nurse who became a quadriplegic in a “vegetative state” in 2008, will soon die. France’s highest court ruled that his food and water should be removed.

European courts ruled in favor of saving Mr. Lambert. But France doesn’t recognize their sovereignty. Normally, a nation refusing the orders of an international court is a good thing, of course. But here France was wrong on the merits.

Countries with few babies, and few workers paying in, will have a very strong motive to accept active euthanasia. As in a poison pill, or a needle in the arm. It’s quicker, cheaper, and in one sense more “merciful.”

The Wife Who Wants to Become a Widow

But the bad actor here seems to be the person with legal power over Vincent’s fate: his wife. Again, we’d normally favor a spouse, rather than anyone else, making such decisions. An exception to that sacred legal principle: When the spouse’s decisions seem to disregard the sick person’s best interests.

Mr. Lambert was not in excruciating pain. He seemed to live comfortably on simple food and water support. He responded to stimuli. As Live Action reports:

He is described by some as “semi-conscious,” and by others as being “in a vegetative state.” Vincent can sleep and wake up, respond to some voices, can swallow, and breathe on his own. He is not dependent on machines to live, but he is dependent on nutrition and hydration being delivered in a special manner, like many people.

The Court of Cassation’s final ruling means that Lambert, who is not otherwise ill or at the end of his life, would be removed from food and water and left to die slowly, which can take 14 days or more. The decision cannot be appealed in France, but his parents are fighting the order and have threatened to press charges for murder if his food is removed. However, Vincent’s wife and six of his eight siblings believe he should be forced to die.

“He sleeps at night, wakes up during the day, and looks at me when I talk,” she said, according to Reuters. “He only needs to be fed through a special device and his doctor wants to deprive him of this so that he can die, while legal experts have have shown that this is not necessary.” She also emphasized that he has reacted to their voices, stating, “In May, when learning about his planned death, he cried.”

The Best Interests of the Vulnerable

I’d say there was good reason to question whether Mrs. Lambert had her husband’s best interests at heart. Let’s look at a case in the U.K. with some ominous parallels. CNA News reports:

The mother of a 4 year-old with Down syndrome is suing the National Health Service of the United Kingdom for what she claims was a failure to offer her a prenatal test for the disability.

Edyta Mordel, 33, claims that if she had known that her son, Aleksander, had Down syndrome in the womb, she would have aborted the pregnancy.

With the lawsuit, Mordel has said that she is seeking £200,000 ($249,000) compensation for the rising costs of care for Aleksander due to his disability.

A sane British government would respond to this case by immediately and forever removing Aleksander from the custody of the mother who wishes he were dead. For his own protection.

Shouldn’t the French courts have decided the same in Lambert’s case?

The Execution of Terri Schiavo

We have no room to throw stones. Too few of us recall the horrors of Terri Schiavo’s death in 2005. As I wrote at the time:

Here’s a woman who was not in a coma, was not brain dead, and didn’t require elaborate machines to stay alive—just a nutrition drip in the stomach, of the sort any one of us might need after, say, a tonsillectomy. (The feeding tube is eerily analogous to an umbilical cord.) And yet American courts have decided that her adulterous husband has the right to impose her death by starvation and thirst. That second word keeps coming back to me. If Terri Schiavo could speak today, what would she certainly say to us? She would say, with Jesus: “I thirst.”

How painful is death by thirst?

Death by thirst is slow, agonizing, almost unthinkably awful. As St. Louis neurologist William Burke told author Wesley Smith, as he was researching his book on euthanasia Forced Exit, people deprived of water “go into seizures. Their skin cracks, their tongue cracks, their lips crack. They may have nosebleeds because of the drying of the mucus membranes, and heaving and vomiting might ensue because of the drying out of the stomach lining. They feel the pangs of hunger and thirst. Imagine going one day without a glass of water! Death by dehydration takes ten to fourteen days. It is an extremely agonizing death.”

We should prepare ourselves. Throughout the West, collapsed birth rates and huge cohorts of retirees will exert enormous pressure on health systems. Countries with few babies, and few workers paying in, will have a very strong motive to accept active euthanasia. As in a poison pill, or a needle in the arm. It’s quicker, cheaper, and in one sense more “merciful” than the “passive” method of letting people like Mr. Lambert die of thirst.

That’s in our future. Welcome to the next pro-life fight, as the generation that welcomed legal abortion faces euthanasia like rescue pets.

And I think judges and policymakers in places like France are purposely authorizing the slow, agonizing deaths by thirst of patients such as Mr. Lambert. Why? Precisely because they’re so horrible.

The European media used a photo of a single drowned Syrian boy as a wedge to admit a million Muslims into countries like Germany. Propaganda works.

The public, sentimental and easy to manipulate via almost unanimous media, will respond not by demanding that sick people like Mr. Lambert be saved. But instead, that we kill them more quickly and painlessly.

Like the animals that Darwinism tells us we really are.