The Fox Business/WSJ Debate in Tweets 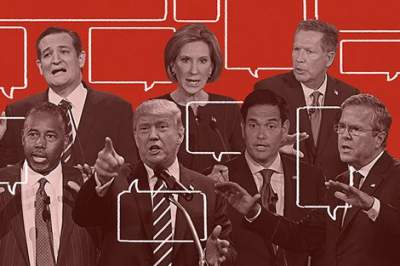 Here we are, the 4th main stage debate of the cycle! Here was the view from Twitter.

The biggest shocker, before it even started, was that Kasich is still running.

What hashtag are we using tonight? #GOPDebate or #WhenDoesKasichQuit? @93wibc

#StuffMyMomSaidDuringTheDebate "I didn't know he was running!" re Kasich

They started with real questions right off the bat:

Already this debate is better than the last one.

Right away Trump destroys the idea of American exceptionalism. We suck at everything! #GOPDebate

Donald Trump right out the gate with pessimism. Ill-advised. And he just said “wages are too high.” What?

Ben Carson thoughtfully explained why the minimum wage doesn’t need to be raised:

Carson is equating the minimum wage increase to the crippling of minority communities. He is so right on this. #GOPDebate

Rubio spoke about the American dream and higher education, asking why vocational schools are stigmatized. The crowd went wild!

When asked about scrutiny over his background, Dr. Carson answered the question with grace and wit.

Carson: Well first of all, thank you for not asking me what I said in the tenth grade. I appreciate that. #GOPDebate

When asked a bizarre question about what Jesus would implement as a tax plan, Carson spoke in favor of a flat tax, to increase generosity.

Ted Cruz said that he would get rid of 5 government departments, then listed The Department of Commerce twice.

The Commerce Department is a garbage agency. It *should* be eliminated twice.

@ThatDuaneLester @AmeliaHammy he would shutter 14 federal agencies, but 4 of them are the Dept. of Commerce

Rubio talked about his pro-family tax code, and the crowd approved.

“If a family breaks down, a nation breaks down.”—@marcorubio. Love this! #GOPDebate

A skirmish broke out between Rand Paul and Marco Rubio over the cost of defense. Twitter gave the win to Rubio.

"I know Rand is a committed isolationist." Done. Cooked. Go home, Rand, it's over.

"We can't even have an economy if we aren't safe." -Rubio #GOPDebate

Got a little nervous Rand attacking Rubio but Rubio kind of crushed that. Yes, Rand, we spend a lot on military, welcome.

The most exciting thing? It was an actual debate!

This is the debate I have been waiting for! The debate we deserve that teases out the "inside the family" arguments! https://t.co/HQDSqNMIOD

When the moderators referred to Hillary Clinton’s impressive resume, the crowd chimed in:

giggles & boos for "Hillary has an impressive resume" #GopDebate

Nearing the end, here’s how it was looking:

Rand Paul – "I'm the only fiscal conservative on the stage." AMEN!!! #GOPDebate

Jeb tells a nice story but he sounds like he's running for class president.

Cruz’s constant referral to his website is tiring. Need to talk more in depth. #GOPDebate

It makes me happy that Rubio asked for votes *in those actual words*. It makes such a difference. #GOPDebate

(and, on a hot mic, the moderators appreciated Rubio)

And, on to the next candidate:

Twitter wasn’t so sure Trump was being honest in his closing statement:

Trump is still lying about self funding. #GOPDebate

"I don't have to give you my website because I'm self-funding my campaign" ohhhhhhkay also, he isn't

Here’s how Twitter users felt it all shook out:

Winners: Rubio & Cruz Losers: Kasich & his whine. Lucky: Trump & Carson for getting away with silence when they were out of their depth.

And Trump is lying his hair piece off about self funding

Did the debate change your opinion on any of the candidates?