For Bernie’s Trip to the Vatican, Fast Facts and 5 Quotes Debunking Socialism 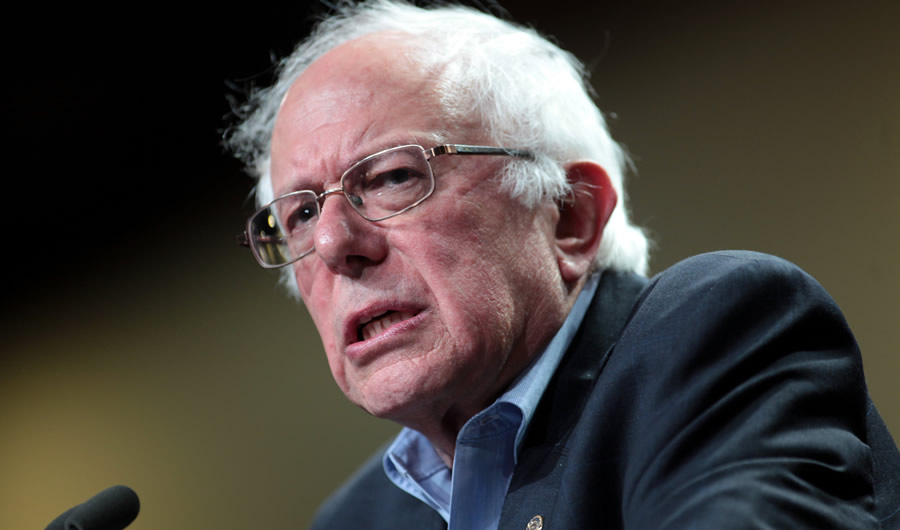 Until very recently in America, the very word “socialist” was a term of abuse. Before Bernie Sanders, calling yourself a socialist was a great way to say one of three things about yourself:

How quickly things change. Now we have a major presidential candidate who calls for “democratic socialism” at every opportunity he can, and tries to take the sting out of the word by pointing to countries like Denmark that practice a mild, if stifling version of what Europeans call “social democracy.” Which amounts to the same thing as democratic socialism. Sanders could easily have called himself a “social democrat” and deftly avoided taking on a American taboo. Instead he has chosen to revel in it, perhaps to draw the sting from the “s-word,” and push our political dialogue further to the left.

“Socialist” — the word is a loaded term and often a rhetorical weapon. But Sen. Bernie Sanders, I-Vt., seems to proudly claim it.

“Do they think I’m afraid of the word? I’m not afraid of the word,” he said in an interview with The Nation published in July. “When I ran for the Senate the first time, I ran against the wealthiest guy in the state of Vermont. He spent a lot on advertising — very ugly stuff. He kept attacking me as a liberal. He didn’t use the word ‘socialist’ at all, because everybody in the state knows that I am that.”

Politico notes that back in 1981, Sanders was more ambivalent about the term:

“I’ve stayed away from calling myself a socialist,” Sanders said in The Boston Globe in the aftermath of his win in ‘81, “because I did not want to spend half my life explaining that I did not believe in the Soviet Union or in concentration camps.”

During Bernie’s mayoral tenure, Burlington formed an alliance with the Soviet city of Yaroslavl, 160 miles northeast of Moscow. When in 1988 he married his wife, Jane, the mayor decided it would be a perfect place for his honeymoon. In a tape of his interview with Yaroslavl’s mayor, Alexander Riabkov, Sanders acknowledges that housing and health care appear to be “significantly better” in the U.S. than in the socialist paradise. “However,” he added, “the cost of both services is much, much, higher in the United States.” Sanders made further globe-trotting expeditions to socialist countries. He visited Cuba, scoring a meeting with Havana’s mayor. In 1985 he attended the celebrations marking the sixth anniversary of the Sandinista revolution in Nicaragua. “In a letter addressed to the people of Nicaragua, penned in conjunction with that trip, Sanders denounced the activities of the Reagan administration, which he said was under the influence of large corporations,” the Guardian notes. “In the long run, I am certain that you will win,” Sanders wrote, “and that your heroic revolution against the Somoza dictatorship will be maintained and strengthened.” (The Sandinistas were ousted by Nicaragua’s voters in 1990).

Needless to say, if Donald Trump or Ted Cruz had honeymooned in apartheid South Africa, and backed a right-wing Latin American dictatorship running concentration camps… the media would not overlook those choices as harmless indiscretions.

Of course, today Sanders speaks only of a kinder, gentler socialism. Politico compiled a series of Sanders quotes about socialism over the years. Here are a few examples of how he tries to spin that system:

What being a socialist means is … that you hold out … a vision of society where poverty is absolutely unnecessary, where international relations are not based on greed … but on cooperation … where human beings can own the means of production and work together rather than having to work as semi-slaves to other people who can hire and fire.

I’m a democratic socialist. … In Norway, parents get a paid year to care for infants. Finland and Sweden have national health care, free college, affordable housing and a higher standard of living. … . Why shouldn’t that appeal to our disappearing middle class?”

“I think it means the government has got to play a very important role in making sure that as a right of citizenship, all of our people have health care; that as a right, all of our kids, regardless of income, have quality childcare, are able to go to college without going deeply into debt; that it means we do not allow large corporations and moneyed interests to destroy our environment; that we create a government in which it is not dominated by big money interest.

As Jake Barnes mutters at the end of The Sun Also Rises, “Wouldn’t it be pretty to think so.” In fact, the Scandinavian countries’ experiment with socialism is already coming to an end, and it never worked nearly as well as outsiders seemed to think. Jeff Jacoby observes in the Boston Globe:

In “Scandinavian Unexceptionalism,” a penetrating new book published by the Institute of Economic Affairs, Sanandaji shows that the Nordic nations’ prosperity “developed during periods characterized by free-market policies, low or moderate taxes, and limited state involvement in the economy.”….

Scandinavia’s hard-left turn didn’t come about until much later. It was in the late 1960s and early 1970s that taxes soared, welfare payments expanded and entrepreneurship was discouraged.

But what emerged wasn’t heaven on earth.

That 1976 story in Time, for example, went on to report that Sweden found itself struggling with crime, drug addiction, welfare dependency, and a plague of red tape. Successful Swedes — most famously, Ingmar Bergman — were fleeing the country to avoid its killing taxes. “Growing numbers are plagued by a persistent, gnawing question: Is their Utopia going sour?”

Sweden’s world-beating growth rate dried up. In 1975, it had been the fourth-wealthiest nation on earth (as measured by GDP per capita); by 1993, it had dropped to 14th. By then, Swedes had begun to regard their experiment with socialism as, in Sanandaji’s phrase, “a colossal failure.”

Denmark has come to a similar conclusion. Its lavish subsidies are being rolled back amid sharp concerns about welfare abuse and an eroding work ethic. In the last general election, Danes replaced a left-leaning government with one tilted to the right. Loving Denmark doesn’t mean loving big-government welfarism.

The real key to Scandinavia’s unique successes isn’t socialism, it’s culture. Social trust and cohesion, a broad egalitarian ethic, a strong emphasis on work and responsibility, commitment to the rule of law — these are healthy attributes of a Nordic culture that was ingrained over centuries. In the region’s small and homogeneous countries (overwhelmingly white, Protestant and native-born), those norms took deep root. The good outcomes and high living standards they produced antedated the socialist nostrums of the 1970s. Scandinavia’s quality of life didn’t spring from leftist policies. It survived them.

In other words, socialism is lot like cocaine — a powerful drug whose effects the wealthy can survive for a while as it burns through their inheritances. But socialism eats up social capital quickly, teaching people to look for their daily needs and human connections to the state, at the expense of free civic institutions such as churches and even their families. Socialism trains people not to take responsibility for their own lives, either morally or economically, and make their accounting to God — but instead to expect from the state a form of secular salvation. No wonder socialist countries of either stripe — democratic like Scandinavia or dictatorial like the Soviet Union — have led to the hollowing out of churches. And no wonder that the Catholic Church has condemned socialism for more than 100 years.

Given the decision of Pope Francis’ close advisor (and climate science enforcer) Archbishop Marcelo Sorondo to invite the pro-choice, pro-gay marriage Sanders to speak at a major Vatican conference, it’s worth recalling what some of Pope Francis’ predecessors on the papal throne said about socialism [h/t TFP]:

Pope Leo XIII: [Socialists] debase the natural union of man and woman, which is held sacred even among barbarous peoples; and its bond, by which the family is chiefly held together, they weaken, or even deliver up to lust. Lured, in fine, by the greed of present goods, which is “the root of all evils which some coveting have erred from the faith,” they assail the right of property sanctioned by natural law; and by a scheme of horrible wickedness, while they seem desirous of caring for the needs and satisfying the desires of all men, they strive to seize and hold in common whatever has been acquired either by title of lawful inheritance, or by labor of brain and hands, or by thrift in one’s mode of life.

Pope Pius XI: “Whether considered as a doctrine, or an historical fact, or a movement, Socialism, if it remains truly Socialism…cannot be reconciled with the teachings of the Catholic Church because its concept of society itself is utterly foreign to Christian truth.”

Pope Pius XII: [The Church insists on] “the protection of the individual and the family against a current threatening to bring about a total socialization which in the end would make the specter of the ‘Leviathan’ become a shocking reality. The Church will fight this battle to the end, for it is a question of supreme values: the dignity of man and the salvation of souls.”

Pope John XXIII: “[N]o Catholic could subscribe even to moderate Socialism. The reason is that Socialism is founded on a doctrine of human society which is bounded by time and takes no account of any objective other than that of material well-being. Since, therefore, it proposes a form of social organization which aims solely at production, it places too severe a restraint on human liberty, at the same time flouting the true notion of social authority.”

Pope St. John Paul II: “[T]he fundamental error of socialism is anthropological in nature. Socialism considers the individual person simply as an element, a molecule within the social organism, so that the good of the individual is completely subordinated to the functioning of the socio-economic mechanism. Socialism likewise maintains that the good of the individual can be realized without reference to his free choice, to the unique and exclusive responsibility which he exercises in the face of good or evil.”

Catholics bedazzled by the apparent endorsement implied by a Sanders invitation to Rome — and that is how it will be interpreted, barring a similar invite to Mr. Trump or Senator Cruz — should keep such quotes ready to hand.

Faithful Catholics: Settle for Nothing Less Than the Truth

Pope on Sex Abuse: ‘We Showed No Care for the Little Ones’