On the 90th Anniversary of the Scopes ‘Monkey’ Trial, Darwin’s Biggest Doubt about His Theory of Evolution Looms Larger than Ever

July 21 marks the anniversary of the famous Scopes “Monkey” Trial, decided 90 years ago in Dayton, Tennessee, in favor of the prosecution. A public high school teacher, John Scopes, was convicted and fined $100 for teaching in favor of Darwinian evolution in violation of a state law at the time. 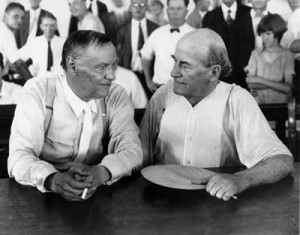 While that’s nearly a century past, defenders of Darwinian theory still present the conflict between unguided evolution and intelligent design as if it had not advanced a bit since Clarence Darrow jousted with William Jennings Bryan over the Bible and science that summer before a courthouse crowd in 1925.

The truth is very different. To commemorate the Scopes Trial, Discovery Institute Press today releases Debating Darwin’s Doubt: The Scientific Controversy That Can No Longer Be Denied, a sequel to Stephen Meyer’s 2013 New York Times bestseller, Darwin’s Doubt: The Explosive Origin of Animal Life and the Case for Intelligent Design.

For a limited time, you can get Debating Darwin’s Doubt at 35 percent off the cover price by going here and entering the discount code 4DXTSYJU. It’s also available for Kindle and Nook, and from Barnes & Noble.

In a way, my Discovery Institute colleagues and I took a leaf from Hollywood, where no box office blockbuster is complete without a sequel. Dr. Meyer’s milestone case for intelligent design kicked up a storm of controversy, and we realized that we couldn’t let the matter rest there. Meyer’s book must have a sequel, and that’s what we are launching. I had the honor of editing the new book, and I can say it is important for three reasons. 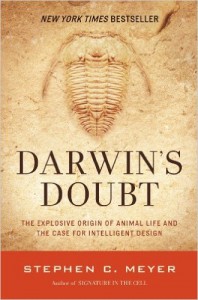 First, it is a sequel. Gathering material from Evolution News & Views, the daily online voice of the intelligent design movement that I also edit, Debating Darwin’s Doubt documents the intense scientific arguments sparked by Meyer’s book. Top ID scholars respond to Meyer’s most challenging critics, from sources ranging from The New Yorker and National Review up to America’s most prestigious journal of scientific research, Science.

Among the book’s 44 chapters are 10 by Meyer, including responses that have not been published anywhere else. Other authors, led by William Dembski, Douglas Axe, Ann Gauger, David Berlinski, Paul Nelson, and Casey Luskin, take on the critics. Their writing is really an expansion of the case Meyer argues for in Darwin’s Doubt, ranging across subjects like orphan genes, cladistics, the notorious “small shelly fossils,” protein evolution, the length of the Cambrian explosion, the God-of-the-Gaps objection to intelligent design, and more.

In the original book, Dr. Meyer demonstrates that an explosion of biological information some 530 million years ago — the Cambrian explosion, a mystery that shook Darwin himself — can best be explained as a product of creative intelligence. If you didn’t have your fill of Stephen Meyer, and we know many of his fans did not, then this is the place to go for more.

Second, the new book is important because it puts to rest a Darwinian myth, an icon of the evolution debate, namely … that there is no debate, about Darwinism or intelligent design! An amusing touch that we included is that each section of chapters in the book opens with effectively the same claim by one or another of the most vocal Darwin defenders.

Ha! The truth is that Stephen Meyer provoked a fascinating, furious discussion of Darwinian evolution, and it’s all documented in these 380 pages. 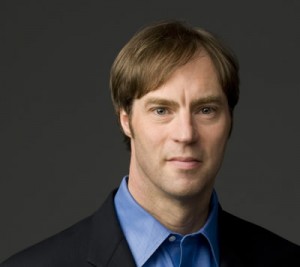 Well, not all of the controversy is here. In fact one of the challenges in editing this book was that I had to leave a great deal of interesting stuff out. If I had included much more, Debating Darwin’s Doubt would be as big a book as Meyer’s original, with a price tag to match. So a key part of my job as editor consisted of not editing things, of cutting them out.

As you may know, the primary response from Darwin defenders to scientific challenges consists of name-calling. They call us “creationists” — the bogus accusation that ID is some sort of an attempt to prop up young earth creationism. As anyone who’s read Meyer, Dembski, Behe, or other leading ID scholars can attest, ID is an argument from science, not Scripture.

But the hip buzzword now is “denial.” Darwin skeptics, intelligent design advocates, proponents of academic freedom in schools and universities — all these are lumped together as “science deniers.” (Along with climate skeptics, of course.) Science denial is meant to rhyme with a better-known formulation, “Holocaust denial.” The insinuation is not only false but vile.

Again, anyone who reads Darwin’s Doubt or Debating Darwin’s Doubt cannot help but be hugely impressed by the fact that this a debate about science, at the highest levels. The real “deniers” are Darwinists who insist there is no scientific debate about life’s origins or history. If turnabout is fair play, perhaps it’s just to call those folks “debate-deniers.” 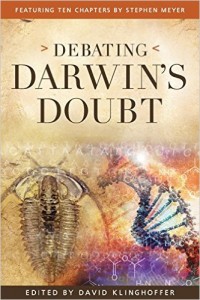 Third, Debating Darwin’s Doubt is more than a sequel, too, in the sense that most Hollywood sequels are just more of the same. The book is important because it shows how the case for intelligent design continues to grow and mature, year by year. Responding to challenges does that. You learn more, understand more, from debating smart opponents than from just about any other intellectual activity. We are making progress — in changing minds, yes, but also in deepening our argument.

That is why, in a cheeky gesture, we planned the publication launch for the Scopes anniversary. If you follow the evolution debate, you know that Darwin advocates have a tendency to live in the past. For them, it’s always 1925 and critics of Darwinian evolution are the same cartoon Bible-thumping yokels that took the stage in journalist H.L. Mencken’s acid reports dispatched from the Scopes Trial.

Darwinists still defend a creaky expression of 19th-century scientific materialism, and we are always that same ludicrous caricature, later translated to movie screens in Stanley Kramer’s 1960 Inherit the Wind, with Spencer Tracy in the Clarence Darrow-like role. That is the film whose fictionalized, propagandizing account Judge John E. Johns watched for “historical context” before issuing his ruling in the 2005 Kitzmiller v. Dover case that has been wrongly spun, over and over, as a decisive defeat for intelligent design.

Ah yes, the Kitzmiller decision. That’s another historical artifact that the Darwin Defense Force lovingly fondles as a substitute for engaging scholars like Stephen Meyer in substantive debate. They clutch Scopes and Kitzmiller to their bosom because they have no satisfying answers to the main arguments in Meyer’s book.

Meanwhile, the case for design in biology (and cosmology) goes forward, gathering power as it does. “The dogs may bark,” as the saying goes, “but the caravan moves on.” They don’t realize it yet, but we are leaving them behind.

David Klinghoffer is a senior fellow at Discovery Institute and editor of Evolution News & Views. He is the author most recently of The Gift of Rest: Rediscovering the Beauty of the Sabbath, with Senator Joseph Lieberman.