Foolish Sayings of the ‘Wise’: ‘God is Too Big to Fit In One Religion’ 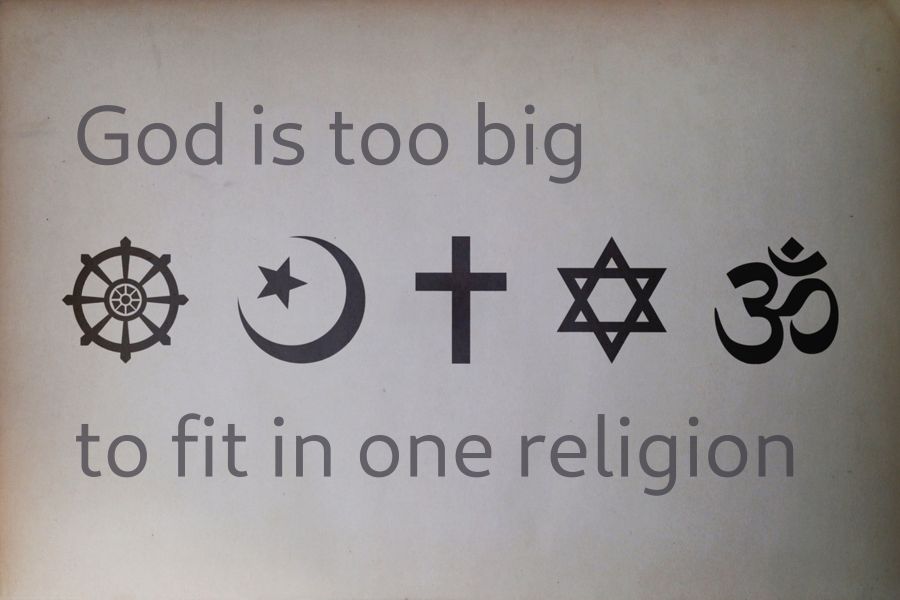 It sounds so wise. It even sounds as if it’s giving honor to God. I’m sure you’ve heard it, probably from someone who wants you to think all religions are equally valid: “God is too big to be fit in one creed or religion.”

Its Hint of Wisdom

It has the appearance of wisdom, no doubt about that. Undeniably God is infinite beyond human understanding. His very being is unimaginably different than ours. Theologians and philosophers use words like “God is being itself,” or “self-existent,” or “the ground of all existence”; and the more they use them, the more they recognize how little they can know of God.

The Fact of Its Foolishness

It’s misleading for at least two reasons. The first should be obvious enough: Words aren’t containers, and neither is any religion or creed. They’re not meant to be. So God doesn’t have to fit in them! They’re expressions, not containers. Creeds are meant to express truths about God and the reality He created, and religions are meant to express the life of those who believe the creeds.

Still, though, one might object that even as expressions, they could never be adequate. Adequate for what, though? Let’s get out of the confusions of theology for a moment; we may be able to think more clearly that way.

I could describe my wife, Sara, for you as a woman who stands about 5’5″, weighs x pounds (I don’t dare tell you how many, even though she looks great!), and has long, silvery hair. Is that adequate information? No, not if you want to know her character, her story, her aspirations, her gifts, or anything else that has kept me enthralled with her for many years. If I told you that and said, “This is the truth about Sara,” I’d be dishonoring her terribly.

Suppose, though, you were meeting her in a coffee shop, and you wanted to know how to recognize her when she walked in the door. Then that description would be all you need. If I told you that much and said, “This is true about Sara,” I’d be speaking truly and well. It’s what you need to know for the purpose you need to know it.

I’ve just illustrated for you the difference between sufficient truth and complete truth (or exhaustive truth, as most writers describe it, though I prefer to use a less exhausting term!). Complete truth is the whole truth, everything that’s true, all of it without exception. Sufficient truth may be just as true, but it’s not the entire truth. It’s true truth without being the entire truth.

Consider what this “wise” person must think about God: “God’s power is so great, He’s powerless to get a point across. His mind is so far beyond human imagining, He has no clue how to express Himself. His wisdom is so vast, He’s totally dumb.”

What matters, then, isn’t whether we know everything, but whether we know enough. I know next to nothing about how my computer’s circuits were designed, but I don’t care, either. I enough to be able to type out this article on it, plus do some other cool things with it. The rest doesn’t matter to me. What I do know is true enough, and sufficient for the purpose.

Can We Know Sufficient Truth About God?

I wouldn’t disagree with that. If we had to figure out God on our own, we’d be sunk. It’s impossible. But it’s also way too human-centered. Consider what this “wise” person must think about God. It would have to go something like this: “God’s power is so great, He’s powerless to get a point across. His mind is so far beyond human imagining, He has no clue how to express Himself. His wisdom is so vast, He’s totally dumb.”

Do you see now why I call this “wisdom” foolish? And that’s not all. Our “wise” person also has to assume it’s up to us to decide how much knowledge of God is enough knowledge, as if God Himself had nothing to say in the matter.

God Has Revealed Himself Truly, and That’s Enough

Christianity agrees that we can know very little of God by human wisdom, certainly nowhere near enough to worship Him rightly. But human wisdom isn’t our only resource. God has revealed Himself truly and sufficiently through His creation, through Scripture, and above all through His Son Jesus Christ. It’s just a bare beginning, a mere taste of God’s infinite greatness, but those who want to know more of Him can do so through faith in Jesus Christ.

And at this point I can’t help but remember the words of my friend John, one of the two who led me to faith in Christ. He said to me once, “I believe we’re going to spend all of eternity getting to know God more and more.” I’m sure he’s right. I’m also sure it would take even longer than eternity to know and understand God fully. But that doesn’t mean we can’t get started on it now!