Food, Faith, and Antelope: How Hunting Filled Me With Awe 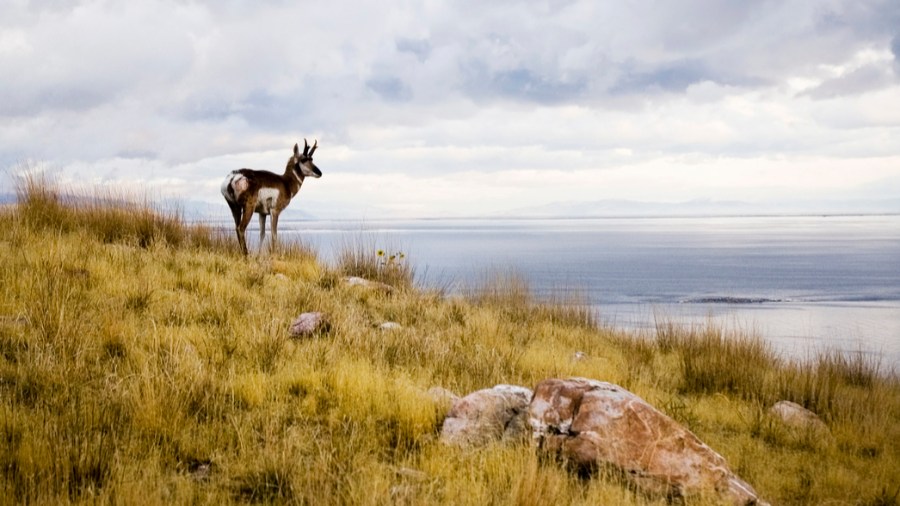 Last week Dottie and I had something for dinner we have never eaten before: pronghorn tenderloin. Pronghorn, popularly known simply as “antelope,” are found throughout the West in high desert. Lander, where we live, gives us access to lots of high desert and thus lots of antelope.

One of them is now in pieces in my freezer.

Prior to last week, I had never shot anything larger than a pheasant. But having moved to Wyoming why not try big game hunting? “When in Rome…,” as I wrote to a friend.

She responded: “Yes, but when in Rome you, Jim Tonkowich, are not required to become a nun merely because you are Catholic. So why are you compelled to shoot an antelope and an elk who are minding their own business in their home turf?”

While we typically eat three meals (plus snacks) every day, we rarely consider what it is we’re doing. What is eating and what are we eating?

In his book The Hungry Soul: Eating and the Perfecting of Our Nature, ethicist Leon Kass wrote, “Compared to wisdom eating may be a humble subject, but it is no trivial matter. It is the first and most urgent activity of all animal and human life: We are only because we eat. Much of human life is, in practice, organized around this necessity.”

We not only pray for “our daily bread,” we work to earn money to purchase that daily bread, make the effort to cook it — or at least order it — and spend time cutting, chewing and swallowing. If we don’t, we die.

God created us as embodied creatures. We are physical beings now and after a brief separation from our bodies at death, eternal life will be lived in the body (1 Corinthians 15:12). In this life God created us to eat.

Our need to eat — our hunger — means that (with the exception of dairy products) something must die. Whether that’s a tomato, a soybean, a steer, a hog, or an antelope, harvesting food always brings death. That grilled pork chop on your plate was once part of a living, breathing hog.

From an Artificial Relationship to a Revelation

We all know that on some level, but we don’t understand it viscerally. That’s because even if we purchase “natural” foods, our relationship to our food is almost entirely artificial.

That pork chop looks nothing like a hog. There’s no indication that it came from anywhere except a back room of the supermarket. You can’t even tell that it was cut from a whole pork loin. We find it presented in a sanitary black foam tray wrapped in plastic with a price sticker. That is, it is completely cut off from it source, that real, once-living hog. Order a pork chop at a restaurant and the dish that arrives is even further removed from its source. I have no illusions about the origin of the antelope tenderloin we had for dinner. I took down the animal with a rifle and I harvested the meat. (Photo Courtesy of Jim Tonkowich)

Since most people don’t plant vegetable gardens and don’t hunt, it becomes easy to distance ourselves from the truth about food, the reality of death, and thus the deep meaning of our embodied selves.

Harvesting food by gardening and hunting puts us back in touch with what it means to be human as God created us.

I have no illusions about the origin of the antelope tenderloin we had for dinner. I took down the animal with a rifle and I harvested the meat.

Shooting a large animal is an awesome experience. That’s “awesome” in the old sense: inspiring awe.

Awestruck at Life, Death, and How God Created Us

Several friends say that upon approaching an animal they’ve killed they begin weeping. Nearly everyone I know stops to offer a prayer. German hunters, I’m told, leave the animal alone for fifteen minutes after it falls and, as a sign of respect, always step around the carcass, never over it.

My friend, Jake who helped me on the hunt, and I certainly rejoiced over my successful shot. At the same time as we approaching the animal, as I field dressed it, as we packed the quarters back to the truck, and as I butchered the meat at home it was with solemnity. And though I’m an experienced chef, I have never cooked with such a sense of reverence as I did cooking those tenderloins. I caused something momentous, something alien to me as an American in the 21st century and yet something deeply human.

I have every intention of going to the supermarket to purchase steaks, chops, roasts, and chicken parts conveniently cut up and packaged. But after harvesting my own animal even “hunting and gathering” at Safeway inspires a bit more awe and gratitude.

Food should not be taken lightly nor should the fact of and gift of our human embodiment. Food points us to the goodness of creation, to God’s providential care, and to death that gives life in slaughterhouses around the country, in Wyoming’s high desert, and in that place called Golgotha.

Woke Meat is Coming: Roast Cockroach and Other ‘Impossible’ Delicacies