And, boy, did Abby Johnson have a big surprise for those gathered. Times Square hushed. "All you heard was that heartbeat." 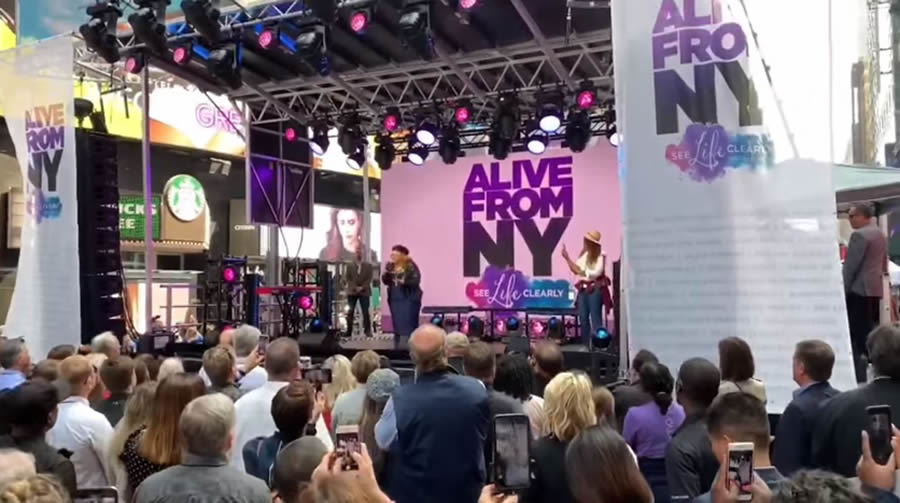 Dr. Alveda King speaks at Focus on the Family's "Alive From New York" event held in Times Square May 4, 2019.

“What can we do? How can we … stand up and say, ‘enough is enough’?” Jim Daly, president and CEO of Focus on the Family (FOTF), was heartbroken after New York passed abortion legislation that allows preborn babies to be killed up to birth. Governor Andrew Cuomo signed it into law January 22, 2019.

“These are full-term babies and babies born alive from an abortion,” FOTF’s Robyn Chambers recently told The Stream. “Jim was just adamant that we come together as Christ-followers and just say, ‘Not on our watch. Let’s do something public that says we’re here for women and their unborn children.’” Chambers is the executive director of Advocacy for Children at Focus on the Family.

They came up with a program, which they titled “Alive From New York.” “Our goal [was] to celebrate life and to educate women, honestly, educate everyone, that life is precious from the beginning.” Focus on the Family wanted to show the humanity of a baby. They wanted to broadcast a 3D-4D ultrasound on the jumbotrons in Times Square.

Nearly 20,000 people showed up in Times Square this past Saturday. While FOTF could only have 10,000 people within their barriers, people flooded the sidewalks around the area. FOTF rented four plazas within Times Square where they placed 20’x30′ giant screens to broadcast the event and show the live ultrasound. But the jumbotrons weren’t available. “We were never granted ad space on the jumbotrons,” Chambers explained. “When we first started talking about this and really looking into doing this, we were told that there was space available. Then, as it got closer to the time to sign our contracts, we were denied that space. So, we brought in our own giant screens.”

Jesus Died for Those Folks As Well

Some protesters showed up. “I was so really humbled and so proud of several of our guests when the protestors came around,” Chambers said. “No one — none of our folks — engaged in that same angry tone. In fact we had several of our speakers who stopped and prayed for those men and women. Alveda King was just brilliant. She said, ‘They come from a place of hurt and we have to remember to pray for those people.”

Chambers said one of her staff reminded her that “the same Jesus who came and died for us died for those folks as well. Their anger or fear or whatever it is that’s driving them comes from a place of being wounded.”

FOTF broadcasted their phone number on the large screens. Along with it, they had a message: “If you or someone in your family has been wounded by a past abortion decision, please call us.” A counseling team was on standby at their headquarters.

The Humanness of Preborn Babies

In addition to counseling, FOTF wanted to educate the public about the humanness of babies in the womb. They broadcast an ultrasound on the large screens.

And it wasn’t just any ultrasound. Abby Johnson, the subject of the movie Unplanned, revealed that she is pregnant. Her unborn baby wasn’t cooperating at first. Chambers said she and the vice president had just a few minutes to decide whether to continue trying to get Johnson’s baby to cooperate. If he didn’t, they’d have to  broadcast an ultrasound from Saturday morning.

It was then that she heard the heartbeat. She told the vice president “Go. Go with that heartbeat right now.” She was inside the bus monitoring the event. A hush spread over the crowd. She’d never heard Times Square so quiet. “All you heard was that heartbeat. Then the crowd broke out into applause.”

Suddenly, the little person cooperated. “We see the 2D image in this perfect silhouette of this beautiful baby. You see the nose and the baby’s yawning, the Registered Diagnostic Medical Sonographer (RDMS) is narrating [what the crowd sees]. ‘There’s the little button nose and there’s the spine.’ Then she finally got the baby to hold still for a few moments and it’s a push of a button and it goes to the 3D-4D [ultrasound] and it’s this beautiful picture of this baby. You could [see a] little hand up by the face sound asleep. It was just a God moment.”

Johnson spoke, as did Ashley Bratcher, who played Johnson in the movie.

Pastor and singer-songwriter Phil King wrapped up the event with a song he wrote called “Not Forgotten.” The song remembers little ones killed by abortion. “Phil specifically wrote a song for those babies that were being aborted or where moms were thinking that abortion was their only option. He came out and sang that with Francesca and her band. And that’s how we kind of wrapped up the day.”

The overall tone was one of peace within the chaos of New York City. It had a redemptive feel. “I was just so happy that it wasn’t a time of shame or guilt to men and women who have faced this,” Chambers said. The event was “a real celebration of life. It was evident in everything that was said, the songs that were sung and the prayers for our protesters. It was just a really special time. God was very present that day, so we’re very, very thankful.”

In addition to the event, FOTF asks folks to sign their “Declaration For Life” supporting the right to life. In a few weeks, they hope to present the signatures to the White House. Right now they have over 230,000 signatures.

Editor’s note: On April 25, 2019, The Stream attended FOTF’s road show in McKinney, Texas. Nancy Flory toured the actual bus used in Times Square. Below is a video of that event.