The First Meal on the Moon 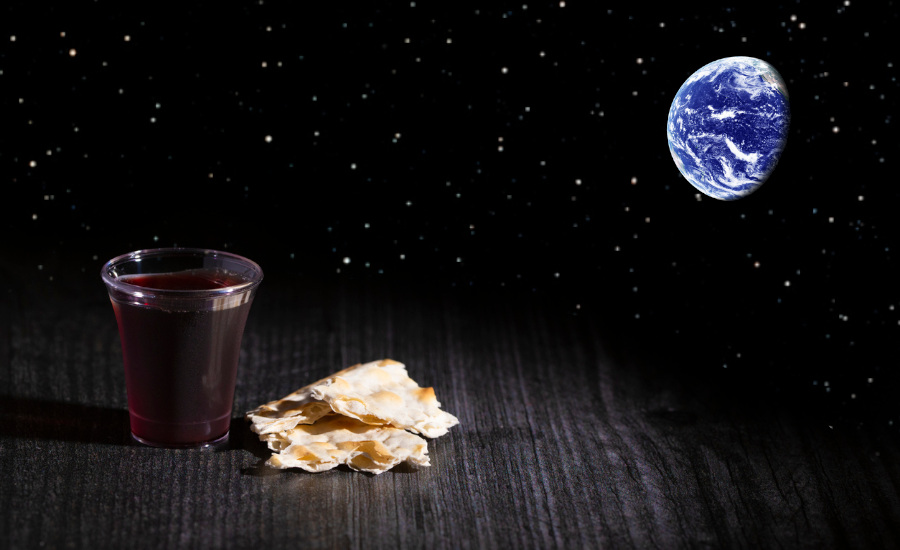 Tomorrow marks the 50th anniversary of the landing on the moon, a major milestone in human history. As Neil Armstrong noted as he stepped on the lunar surface, “One small step for [a] man, one giant leap for mankind.” Armstrong and Buzz Aldrin planted the American flag on the moon, as they explored the surface for some 21 hours.

What was the first meal on the moon? It may surprise you to know that it was bread and wine in a one-person celebration of the Lord’s Table. As Neal Armstrong respectfully looked on, fellow Apollo 11 astronaut, Buzz Aldrin marked the incredible occasion by celebrating Holy Communion — communing between him and God. This was before they stepped out of the “Eagle,” the lunar module, to walk around on the moon.

In the October 1970 issue of Guideposts magazine, Aldrin tells of the experience: “For several weeks prior to the scheduled lift-off of Apollo 11 back in July, 1969, the pastor of our church, Dean Woodruff, and I had been struggling to find the right symbol for the first lunar landing.”

Buzz Aldrin was an elder at Webster Presbyterian Church in the greater Houston area. Pastor Woodruff told him that, “God reveals Himself in the common elements of everyday life.” That would include bread and wine, the elements of the Lord’s Table, a celebration of Christ’s death on behalf of sinners.

The idea of communion on the moon was Aldrin’s. He writes: “I wondered if it might be possible to take communion on the moon, symbolizing the thought that God was revealing Himself there too, as man reached out into the universe. For there are many of us in the NASA program who do trust that what we are doing is part of God’s eternal plan for man. I spoke with Dean about the idea … and he was enthusiastic.”

Aldrin writes: “I wondered if it might be possible to take communion on the moon, symbolizing the thought that God was revealing Himself there too, as man reached out into the universe.”

They decided that while Aldrin served himself communion on the moon, his church back home on earth would be participating in communion at roughly the same time.

But, even though he was an elder, would he have permission from the church to serve himself the elements? Pastor Woodruff inquired of the stated clerk of the Presbyterian Church’s General Assembly and received a swift okay.

Apollo 11 landed on the moon on the afternoon of Sunday, July 20, 1969. Astronaut Mike Collins was circling at that time, in the words of Aldrin, “in lunar orbit, unseen in the black sky above us” in the command module, while Armstrong and Aldrin were in the lunar module.

A Moment of Silence and Thanksgiving

On my radio show, I spoke about this little-known incident of the first meal on the moon with Bill Federer, historian and bestselling author. Said Bill, “Buzz Aldrin was such a famous astronaut that the Toy Story character was named after him, Buzz Lightyear.”

Bill notes, “Before they stepped [onto the moon], they had a rest time. And they turned to radio silence.”

Aldrin was the one who requested the radio silence, saying: “Houston, this is Eagle. This is the LM Pilot speaking. I would like to request a few moments of silence. I would like to invite each person listening in, wherever and whomever he may be, to contemplate for a moment the events of the past few hours and to give thanks in his own individual way.”

Federer notes that earlier, when the Apollo 8 was in outer space at Christmastime 1968, the crew had read from Genesis 1: “In the beginning God created the heavens and the earth. …” Alas, Madalyn Murray O’Hair, the famous atheist, sued NASA for this incident. Perhaps this lawsuit inspired the radio silence Aldrin requested.

In any event, Aldrin tells of his plan “to give thanks” for this incredible moment: “For me this meant taking communion.” That is very fitting, since historically, communion was called the Eucharist, derived from the Greek word for thanksgiving — in gratitude to Jesus for His sacrifice.

Aldrin continues, “In the radio blackout I opened the little plastic packages which contained bread and wine.” His church back home had given him a little chalice. As he poured the wine into the chalice, he notes, “In the one-sixth gravity of the moon the wine curled slowly and gracefully up the side of the cup.”

The Bible passage that Aldrin chose to read were the words of Jesus from John 15:5: “I am the vine, you are the branches. Whoever remains in me, and I in him, will bear much fruit; for you can do nothing without me” (TEV).

Aldrin added: “It was interesting to think that the very first liquid ever poured on the moon, and the first food eaten there, were communion elements.” As I write all this, I keep hearing the words of Paul Harvey, longtime radio broadcaster, “And now you know the rest of the story.”