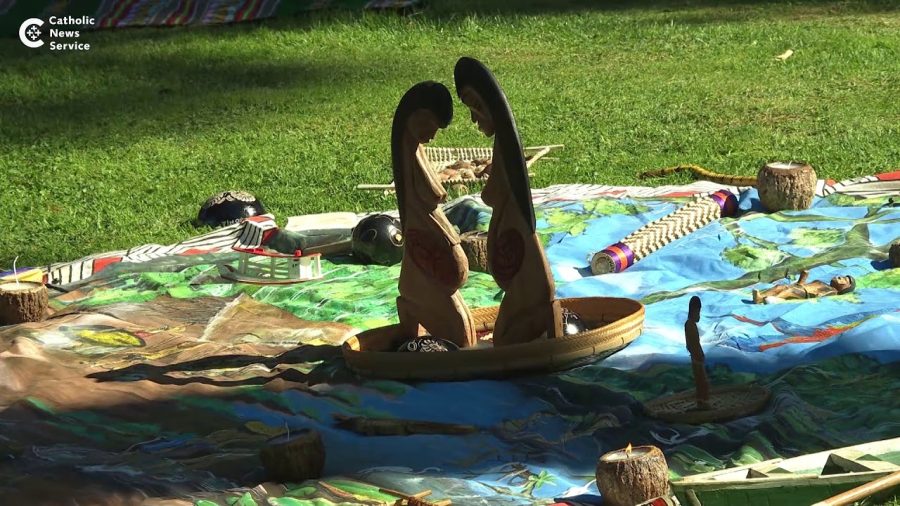 The Amazon Synod is over, pagan rituals and all. It was funded and led by German bishops. And their powerful, left-wing lay organizations. Together, they wield millions harvested from mostly non-practicing Catholics via their “church tax.” The Synod’s leaders took money from others. For instance the pro-abortion, population control-happy Ford Foundation. Globalist guru Jeffrey Sachs? He came as an honored guest. Read Maureen Mullarkey on Sachs’ enthusiastic embrace of the Synod. He sees in it a chance to seize the resources of the Amazon on behalf of globalist institutions.

The Synod’s pretext? The utter failure of local Catholics in the Amazonian region to evangelize. But its leading lights were German bishops. Their local churches are also empty. (Meanwhile, Protestant churches that preach Jesus Christ still thrive.) One former “missionary” prelate attending was Bishop Erwin Kräutler. He boasted that he “has not yet baptised any Indian and will not.”

As everyone expected, the two corpse churches performed a tedious tango, an ecclesiastical Dance of Death.

A Pagan Face on a Globalist Landgrab

The pretext of “reaching” unreached Indians quickly fell away. The Synod’s documents made that clear. Instead of an action plan for preaching Jesus Christ? They laud local paganism. Indeed, they hold it up as a healthy alternative to Western “materialism” and the market economy. LifeSiteNews translated and analyzed the final statements from the Synod. It’s a text that unnamed authors had prepackaged. The organizers handed it out. And bishops voted for it with Soviet docility. The pagan idol enshrined at the Vatican and worshiped by prostrate natives? The fertility goddess Pachamama. She is isn’t even indigenous to the Amazon, but to the faraway Andes.

The worship of Pachamama, the fertility Goddess of Nature, is now a fundamental element in the law code of Bolivia, and Morales (in his commitment to Pachamama and to the ancient Incan religion of Bolivia) is supported by a shadow cabinet of shamans, who sacrifice llamas as part of this spirituality.

Bolivia is perhaps the first example of a Marxist state that is religiously, occultically pagan.

Christ Seems Beside the Point

“[M]entioned only briefly and in passing, or entirely omitted” from the Synod’s documents? LifeSiteNews cataloged the following central elements of apostolic Christianity.

The words “Trinity,” “heaven,” and “hell” never appear, and “sin” only a handful of times, never with specificity except to mention “ecological sin” in paragraph 82. “Salvation” is mentioned four times but never with regard to sin. The name “Christ” appears frequently though, a total of 24 times.

What did the document include? “An agenda that conforms closely to eco-socialist and cultural diversity ideologies, displacing distinctly Christian values with an alternative set of concerns.”

As everyone expected, the two corpse churches performed a tedious tango, an ecclesiastical Dance of Death.

A Soviet Party Congress Circa 1980

The document repeatedly exalts indigenous cultures and traditions, characterizing them in almost entirely positive terms without mentioning that they are largely inspired by paganism and a pantheistic worship of nature. The Synod Fathers mention the deep moral collapse of the region without any reference to causes within indigenous and local cultures.

Instead, the document blames the existence of vices in the area on capitalist economic development and urbanization [10]. It also encourages the creation of new religious rites inspired by the ritual practices and worldview of local cultures [for example 52, 116-119], largely ignoring their pagan foundation, and only briefly mentioning that such traditions need to be “purified” [52].

No mention is made of pedophilia, incest, and burying deformed children alive, practices that traditionally have been widespread among indigenous groups, nor the rampant forms of superstition and idolatry that characterize their traditional cultures.

All in all, the Amazon Synod resembled nothing if not a Soviet Party congress circa 1980. Where soulless bureaucrats who could barely trouble themselves to pretend they believe in their official dogmas shuffle deck chairs on a rusty, sinking ship. And everyone votes for everything almost unanimously. Then applauds till his palms bleed. If he knows what’s good for him.

The Tibering of the Idols

The one bright spot in this whole dismal snuff farce? When zealous young Catholics marched into a historic Roman church, where cheap, crude Pachamama statues sat enshrined on the altar. Then these young men marched out with them and hurled them into the Tiber.

As I wrote at the time:

The response has been predictable. The leftist Catholic writers and priests in favor with the Vatican cried … you guessed it: “Racism!” They accused the Catholics involved of … “Xenophobia.” Following the script for the entire Amazon Synod, they used hapless, uncatechized hunter-gatherers as a stalking horse for a decadent, post-modern and post-Christian ideology. One which just happens to fit the agenda of globalists hungry for political and economic power. But that’s just a total coincidence, of course.

The young man who led the Maccabees-style attack on idolatry has come forward with his real name, Alexander Tschugguel. He gave an exclusive interview to Church Militant. In it, Tschugguel made clear that he bears no animus against Amazonians. Not even the pagan ones. In fact, his concern for their souls as well as his own drove his actions. He explained his motives with charming simplicity. “We just thought it would be better for the pagan idols to be outside the church, instead of in it.”

He explained that he’d watched the Synod with deep concern. Its aim, he concluded, was to corral Catholics into “obeying a globalist agenda. A worldly ideology that the Church must serve.” He noted that Pope Francis recently called on the world to “obey the U.N. But we only obey our lord and savior, Jesus Christ. And the hierarchy, which must look to what Jesus told us, not to the U.N.”

Young, Zealous, and Probably in Trouble

I hope Herr Tschugguel has a good attorney. Because the Vatican won’t take his gesture quietly. Weeks ago, it asked the Italian police to prosecute him for theft. More likely, in my opinion? A hate crime prosecution in Austria, where critics of Islam have faced prison.

The world saw another potent gesture of resistance to globalism with a pagan face. LifeSite reports.

A Catholic priest in the Archdiocese of Mexico City burned effigies of the pagan “Pachamama” statues while leading the faithful in prayer to atone for the sin of worshiping the statues at the Vatican during the recently concluded Amazon Synod.

The priest appeared alongside a real indigenous image, the miraculous icon of Our Lady of Guadalupe, whose appearance led to the actual conversion of millions of Mexican Indians to Christ.

The fire is lit. We lay Catholics are “lit.” We can see our beloved Church kneeling before the world. And before its idols. We are learning to reject the “oracle” theory, which, contrary to official doctrine, pretends every word from any pope’s mouth comes from the Holy Spirit. Indeed, the papacy, so conceived, amounts to an idol itself.