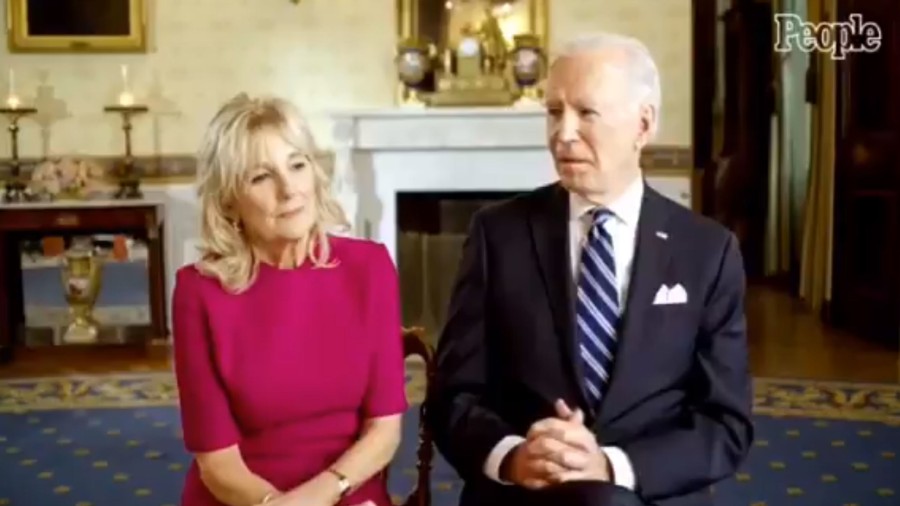 In this screenshot from a video shared on Twitter, Joe and Jill Biden are seen seated for an interview with People. Twitter has since taken down the video "in response to a report by the copyright owner."

Attorney Michael van der Veen won an acquittal for his client. But because he defended Donald J. Trump, he had to be punished. Saturday night, van der Veen’s house was vandalized.

In this new America the Left is racing to build — with the silent approval of Joe Biden and the cash of Kamala Harris — violence against anyone associated with Donald Trump … or for that matter, anyone opposed to the “progressive” agenda, is acceptable.

You associate with Trump … you disobey … you will pay a price.

Sometimes it seems the only difference between the cartels and the crowd running Washington is geography.

Van der Veen was in no mood this weekend to celebrate his victory. In a now-viral clip, the lawyer ripped into CBS News’ Lana Zak after she minimized the fact that House Managers shamelessly doctored evidence in the impeachment trial.

Trump’s lawyer destroys CBS News. I imagine this won’t go viral because MSM and Big Tech will do what they can to smother the truth. pic.twitter.com/HNrFU2sIR8

“It’s not OK to doctor a little bit of evidence,” van der Veen said, with clear irritation. “The media has to start telling the right story in this country. The media is trying to divide this country. You are bloodthirsty for ratings, and as such, you’re asking questions now that are already set up with a fact pattern. I can’t believe that you would ask me a question indicating that it’s alright to doctor just a little bit of evidence. There’s more stuff that we uncovered that they doctored, to be frank with you.”

In fact just yesterday, Just The News revealed a “smoking gun” email from Comey to Clapper. In the January 2017, email, the then-FBI Director admitted “We are not able to sufficiently corroborate the reporting” of the Steele Dossier. And yet that very day Comey signed a FISA warrant affirming the information was “verified,” allowing the FBI/DOJ to continue spying on Trump campaign official Carter Page and thus President Trump himself. And this was after the FBI knew Page was a CIA asset and not a Russian spy.

No criminal charges. No justice. Your only punishment? Book deals and being slobbered on by CNN’s Brian Stelter.

Another Myth from the Capitol Riot

When there is no consequence for falsifying evidence, those willing to falsify evidence become more brazen. When you’ve failed to “get” Trump so often before, you become more willing to say and do anything.

One of the myths told by House Managers and the media is that Capitol Hill police officer Brian Sicknick was killed by a Trump supporter after being hit with a fire extinguisher.

It simply is not so. And the House Managers knew it wasn’t so.

The origin for the story was a New York Times article from January 8. Saturday, quietly, the once reputable newspaper issued an “update”:

Interestingly, The New York Times originally sourced “law enforcement officials.” Suddenly, it’s “officials close to the Capitol Police.” As has been pointed out, those “officials” could well be Democratic lawmakers eager to smear Trump.

Sure, you might say, the NY Times confessed it blew the story after the impeachment was all but over. The House Managers didn’t know that. Oh, but they did. They did.

As Greg Greenwald so brilliantly pointed out. On February 2, CNN reported:

According to one law enforcement official, medical examiners did not find signs that the officer sustained any blunt force trauma, so investigators believe that early reports that he was fatally struck by a fire extinguisher are not true.

Further, on January 8, pro publica quoted Officer Sicknick’s brother Ken, who said Officer Sicknick texted the family hours after the riot. The officer reported he’d been twice hit with pepper spray, but was in “good shape.” Officer Sicknick later collapsed in the Capitol and passed away. Though there’s been talk of a stroke, officials have been holding onto his cause of death. (I’d say “inexplicably,” but as noted above withholding evidence that would work in Trump’s favor is practically the official sport of the Swamp.)

But what do we know?

No fire extinguisher was involved in his death. No blunt trauma. No official cause of death. No proof of murder or manslaughter. Certainly no proof a “Trump supporter” is at fault. And the House Managers knew it. And yet they repeated it.

As did Joe Biden after Donald Trump’s acquittal. (Of course, this is the same man who spent the fall bashing Trump with the Charlottesville Lie.)

Is there any evidence at all that this statement from President Biden is true? Does it matter?https://t.co/jEBu5zKjhX pic.twitter.com/vGUCH0hWSk

Certainly, the hard hitting journalists at CNN wouldn’t let a president get away with such a misstatement of established fact. Especially a claim that would enflame a country he insists he wants to unify. A claim that contradicts their own reporting.

Actually, they were way too busy breaking the huge blockbuster story that Joe Biden, when the fire in the Oval Office fireplace starts to die down, will actually put another log on the fire … all by himself!

Yes, that is an actual CNN news story:

President Biden has expressed a preference for a fire built in the Oval Office fireplace, and sometimes adds a log himself to keep it going. Unlike his recent predecessors, he’s more of an early-to-bed type. Here’s how Biden is settling into his new job.

With Trump they were Woodward and Bernstein on steroids. With Biden, they’re barely Regis and Kathie Lee.

A Tale of Two Videos

The fire story is a perfect metaphor for what’s been happening in our country. The media and congressional Democrats have been throwing up a lot of smoke to hide what happened in this election, what this administration is doing and how Biden is doing.

Two videos that made the rounds over President’s Day Weekend symbolize the point. The first was leaked from People magazine’s interview session with Joe and Jill Biden. It’s marked, ‘not to be shown to public.” But somebody thought the public needed to see it.

Then yesterday, on President’s Day, this is what was happening down near Mar-a-Lago.

Biden, you’re told, won. Trump, you are told, is twice impeached and “He is done.”

EDITOR’S NOTE: It appears Twitter has removed the Biden video at the request of People magazine. As if the media and Big Tech can hide a dazed and despondent and dementia-laden Joe Biden forever. But the action does prove the earlier point. There is no limit on how far anti-Trump forces will go to hide evidence.