JANIS HARRIS — I have a story of hope to tell you, a story of a baby boy who at the moment of conception was faced with unimaginable challenges. This baby boy was diagnosed with an omphalocele, a condition in which the organs of a baby are outside the body. Many babies born with this condition do not live. Their fight for life is intense, expensive and sometimes hopeless. If they live, they and their families are faced with extremely challenging, heartbreaking medical issues. In most cases, the parents are advised to abort the baby before he has a chance to live.

It was assumed by the medical community that this baby’s life would be aborted. His young parents, thrilled over the blessing of expecting their first child, were given the heartbreaking news that the life inside her womb has an omphalocele, but no matter the challenges ahead of them, abortion was not an option.

The value of human life has taken a big hit since the Roe vs. Wade decision, when a woman’s rights were determined to have more value than a new life living in her body. In this self-seeking, self-promoting, “I have rights” society we live in, the sanctity of human life has been devalued to such a low that the right of women to murder their unborn babies takes precedent over the right for the babies to live, breathe and be cherished by their parents — if not by their birth parents, then adoptive parents. Their little lives are snuffed out before they have an opportunity to take their first breaths outside their mommies’ wombs. 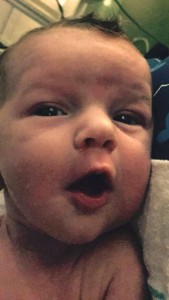 There are many reasons that the decision to end the life of a baby is made: health issues, shame, inconvenience, unplanned pregnancy, financial issues and a plethora of other arguments. Many maintain that the embryo is not a life; it is just a mass of tissue with no value, and for some that mass may have potential health challenges that would cause him or her to live a life with handicaps, doctor visits, catastrophic medical expenses and, ultimately, early death. So, get rid of this life. It’s simple. Just a quick procedure and the problem is solved. The parents won’t be inconvenienced, and the baby won’t know the difference.

To those who have made the decision to terminate their pregnancies, both mothers and fathers, there is often guilt, despair, condemnation and self-loathing, no matter what the reasons are for termination of the pregnancy. The great news is that God loves you just as He loves the life that was ended. He is ready, willing and eager to heal your broken heart and take away the despair and guilt you live with. He longs to love your hurt away and help you truly live.

In little Reed’s situation, the medical community assumed that his parents would end his life before he had the opportunity to fight for it. Thankfully, this young couple, who believe in the sanctity of life and in the sovereignty of God, wanted to give their baby a chance to fight for his life, at any cost and inconvenience to them. Just as the doctors had diagnosed, Reed was born with a giant omphalocele, the most severe type, which occurs in 1 out of 10,000 babies. But he was alive, alive and fighting to live, and as he fought, his parents, family and friends fought for him in prayer.

Each day that passed held a new victory! Some were small, but victories, no less, and still little Reed fought! Day by day he got stronger. He began to drink the milk that was offered him to sustain his life, each day a little more than the day before. Then, the oxygen that was his lifeline was diminished in small amounts each day, until the day he no longer needed help to breathe on his own! Then the day came when the only outside wires or tubes attached to his body were the monitors to track his progress.

Miraculously, on February 6, 2015, this fighting little boy went home with his loving parents! Yes, there are challenges still before him and his family. But by God’s grace and the strength and conviction of his parents, he has the opportunity to fight and to live! No doubt God has a remarkable purpose for Reed’s life and he will be used mightily to point others to Christ and be a living example of the value of a baby’s life, no matter how ill or what challenges he or she will face!

“For You formed my inward parts; You knit me together in my mother’s womb. I praise You for I am fearfully and wonderfully made. Wonderful are Your works! And my soul knows it very well. My frame was not hidden from You, when I was being made in secret, intricately wrought in the depths of the earth. Your eyes beheld my unformed substance; in Your book they were all written, every one of them, the days that were ordained for me, when as yet there was none of them.” (Psalm 139:13-16)