Fearless: Christian Women in the Muslim World Who Risk Everything to Follow Jesus

A new book by missionaries Tom and JoAnn Doyle provides a behind-the-scenes look at how Christian women share Christ in the Middle East. 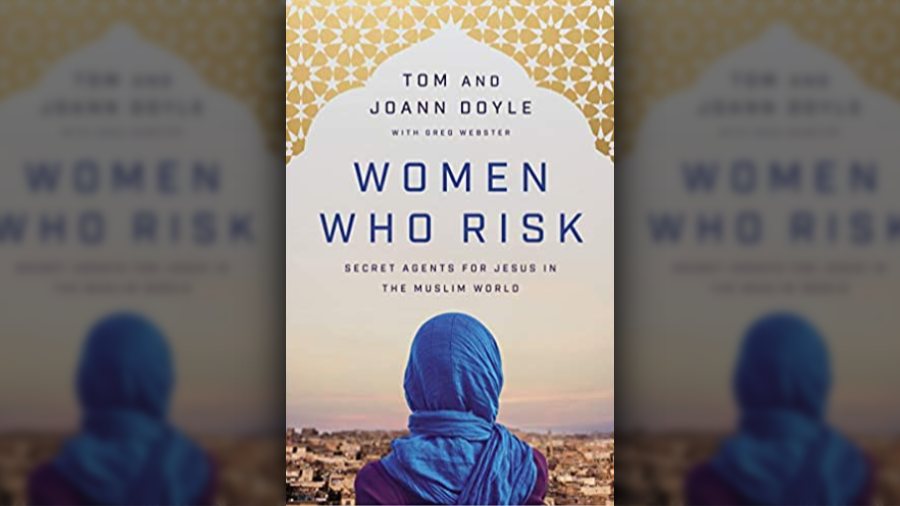 Even if they don’t lose their lives, they could lose their families, including their children. Yet two missionaries have learned that women are the key to reaching the Muslim world.

“Reach a Muslim woman, reach the Muslim world because they are an open door to the family and the kids,” said Tom. Muslim women are not given credit for the spiritual influence they have in their family, because they don’t have a lot of rights. But God has given them the role of spiritual influencer within their own family. When these women become believers in Christ, they share with their families, even though it’s quite dangerous.

Tom and JoAnn Doyle tell the stories of Muslim women who’ve given their lives to Christ and are sharing the Good News with their family members in their newest book, Women Who Risk: Secret Agents for Jesus in the Muslim World.

For 25 years, they have worked in the Middle East to reach Jews and Muslims. “We started noticing no matter what people group we were working with … it was always the women that were bubbling up to the top,” said JoAnn. “They were typically the ones that were coming to Christ first and then bringing the message of truth of Jesus back to their families. They go back and tell that news, that exciting news, to their family and influence them for the kingdom of Christ.” Tom added, “After all, women are the spiritual gatekeepers of their family no matter where they live or what religion they come from.”

About 20 years ago, the couple began hearing stories of Jesus coming to Muslims in their dreams. Tom was skeptical. But then he thought, “If 86% of Muslims worldwide don’t know one Christian, and probably about half of the global population of Muslims don’t read, how in the world are they going to get the message? So, Jesus started bombarding Muslims around the world with dreams, telling them He loves them. And we are privileged to tell some of the stories about them in this book.”

“Have you heard that Jesus is coming to people in dreams?” a friend asked Jamila, a Muslim woman from Syria. Jamila thought to herself, “Wow. Jesus is a man of peace. I wish he would come to me in a dream.”

Not long after, Jamila suffered a stroke and lay in the hospital bed, dying. According to her doctor, her family needed to plan her funeral. She had a day or two to live.

What the doctor and her family didn’t know was that Jamila could hear every word they said. She was thinking, “This is terrible. I’m going to die,” Tom told The Stream. Suddenly, a man in dazzling white clothes stood at the foot of her bed. “He smiled and called my name,” she told JoAnn. “‘Jamila, I am Jesus! I hear you’ve been looking for me.'”

Even though she was a practicing Muslim, she knew who Jesus was. “He said to me, ‘Jamila, I know you’re longing for Me to visit you. I’ve heard your cries. Here I am. I’ve come to heal you for My glory.'” Over the next few days, Jesus visited Jamila. As He touched parts of her paralyzed body, she was healed.

When she woke from the coma, she heard her father exclaim, “Allahu akbar! But Jamila cried, “Jesus, don’t leave me! I love You!”

How Could They Deny the Miracle?

As she regained her health, she tried to find out more about Jesus. One day she saw a woman in the market who was wearing a cross. Jamila told her, “Jesus healed me of paralysis when I was in a coma! Do you know how I can find out more information about Jesus? I’m a Muslim.”

Muslims are Open to Jesus

Jamila’s story of falling in love with Jesus isn’t as rare as one might think. Neither are the dreams of Jesus.

“Muslims are so open to Jesus,” JoAnn said. “They are created in the image of God. They have a soul that is going to spend eternity somewhere. And God has given us this beautifully golden engraved invitation to invite these people, these Muslims, to invite them to join us in heaven one day, by coming to know Jesus as Savior.”

JoAnn said it’s a wake-up call to the body of Christ. “If we are not going to share Jesus with Muslims, then He will … Jesus Himself will go and appear to them.”

“Satan’s had a war on women since the garden of Eden,” said Tom. “He’s wanted to retaliate. … Just look at what they face today: child brides and forced conversions and sex trafficking and all these things, but it’s the women throughout the world that are rising up fearlessly. This is not a women’s lib kind of movement. This is just falling in love with Jesus and being willing to risk their life for their family.”

He added, “They have a holy boldness.” That boldness is seen in how the women come together in the face of persecution and possible death to worship and talk about what Jesus has done for them.

JoAnn was present for a Bible study when a group of women, dressed in hijabs, entered the room, closed the curtains and bolted the door. The women then removed their hijabs and began telling their stories. “That allowed me to see more of who they really were,” said JoAnn.

“These women have become dramatically more beautiful hearing how Jesus appeared to them and how He has transformed their lives.” Now the hijab is “camouflage” that keeps them safe “in this radical place where they live so that no one knows that they’re a follower of Jesus.” Look in their eyes, she added, and “you will see that joy of Jesus peeking out.”

While Muslims in the Middle East who want to follow Jesus face possible suffering and martyrdom, those in the West have a different question to consider. The question for us isn’t whether we’ll die for Jesus, said JoAnn. “Most of us would probably say, ‘Oh my goodness, yeah,’ because we’re not faced with that. But the question we have to ask ourselves here is, ‘Are we willing to live for Jesus? Are we truly willing to let our light shine?'”

JoAnn’s prayer for readers is that they not feel sorry for the Muslim women who’ve found Christ, but be encouraged that “Jesus is meeting them right in the middle of their darkness and shining His glistening bright light, and completely changing their lives for the kingdom and for the better.” She also wants believers to be propelled “to go out and engage Muslims, get to know them, realizing that they can make a difference and possibly lead someone to Christ.”

“God is doing some powerful things in our midst and we should be encouraged,” said Tom. “This book, these are true stories. They are not made up. It will blow your mind. And at the same time it will rip your heart out and you’ll think, ‘Oh my gosh, I want to live for Jesus more just for the inspiration.’ It will elevate your faith.”