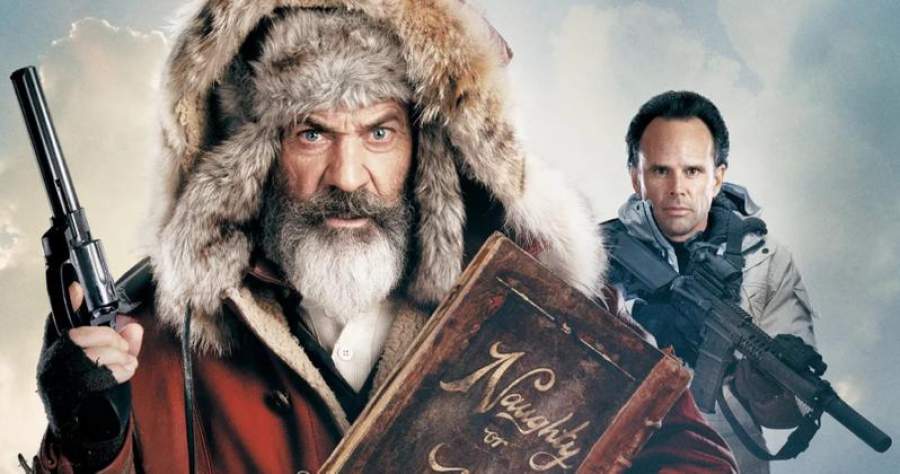 Fatman is a new movie directed by Eshom Nelms and Ian Nelms and starring a heavily-bearded Mel Gibson as a certain gift-giving figure of holiday lore. It’s a hard movie to analyze — much less categorize. Is it dark fantasy? Satire? Social commentary? All of the above? And does it even have a point?

Here’s the plot. Rich, bad kid Billy Wenan (Chance Hurtsfield) abuses the household staff, threatens the girl who beat him in the school science fair and steals his grandmother’s Social Security checks. And what does he do with that money? Billy hires an obsessive-compulsive hitman known as the “Skinny Man” (Walter Goggins), who happens to have a side hobby: buying up people’s old Christmas gifts, as a way of working out his childhood grudge against Santa.

Skinny Man’s fastidiousness is contrasted with the messiness of Chris Kringle (Gibson, of course). Twenty-first century Santa lives in North Peak, Alaska. He drives a 1970s Ford truck with an AM radio and cassette player, and in his spare time hones his pistol skills. He’s a slob who eats cookies as he drives into town to pick up his government check. Yes, Santa now works for the U.S. Government — which pays Chris “based on volume of presents delivered.” And that’s a problem: with so many kids being bad, only half of them are now getting gifts from Santa. Uncle Sam isn’t happy, and Santa’s whole operation is in danger of going bankrupt.

Good and Bad — But Not Just Ugly — Scenes

But things are about to get worse for the already-jaded Chris Kringle. After Kringle literally leaves bad Billy a lump of coal, the spoiled punk hires the Skinny Man to “kill the Fatman.” The hired gun then sets out on his own personal revenge tour, leaving a trail of blood all the way to the Arctic circle. Suffice it to say this isn’t a movie for kids, or the faint of heart. If The Grinch gives you pause, this movie will give you the chills.

But it’s not just Lethal Weapons’ Martin Riggs in a ZZ Top beard. There are witty, genuinely funny and moving scenes. Ruth Kringle (Mariann Jean-Baptiste) is wonderful in her own right, and a perfect complement to Kris’s cynicism. She also saves his bacon, both literally and figuratively. The many references to the U.S. government supporting Santa’s business just because it represents a massive economic stimulus ring all too true. The one scene with the reindeers (in their stalls) is a howler, as one of them teaches a suit a valuable lesson.

The often-excoriated Gibson proves, yet again, that he is an excellent actor. When Ruth leaves some thankful letters from kids whose gifts from Santa led them to productive careers, Chris gets choked up. So Fatman is more than just an extended NRA commercial.

How Original Is This Movie?

What to make of this Miracle on 34th Street meets Pulp Fiction? The idea of trying to kill Santa is actually not original here. It first cropped up in the 1938 radio drama The Plot to Overthrow Christmas. In that story, Satan, unhappy that the Fat Man in the red suit is spreading cheer and altruism, sends Nero to knock him off. But the damned Roman emperor changes his mind, unlike Fatman’s antagonist.

The movie does generate some sympathy for the assassin, whom we learn is a formerly “twisted child” named Jonathon Miller, as well as for his young boss, Billy. Miller’s step-parents abused him, while Billy’s absent father clearly scars him. Still, as Chris Kringle himself elucidates, their bad environments are no excuse for choosing evil. They must be punished, although one does get a shot at a second chance, if not actually redemption.

And that, I think, reveals the key to this perplexing, yet entertaining and thought-provoking, movie. It’s rife with Law, but very little Gospel. Maybe Chris Kringle is John the Baptist on steroids, the enforcer of the Law — as when he shames a truck driver at the bar into going home to his family instead of sleeping with the bartendress. There’s certainly nothing in this movie about the Christ child and the Incarnation leading to the Crucifixion and Resurrection.

Not St. Nicholas — But Maybe Another Familiar Figure

But even more accurately, Chris Kringle might be seen as a figure from pagan mythology. And with good reason. He has superhuman strength. At one point he single-handedly replaces an entire pallet which had fallen off a forklift. A gunshot wound which some “kids with a deer rifle” gave him heals in a few days. He tosses off a glass of poisoned milk with glee. This isn’t Saint Nicholas.

No, Chris is more likely modeled on the Norse god Odin. Besides the healing powers and ability to traverse the globe overnight, Chris says, at one point, “You think I got this job because I’m fat and jolly?” My thesis is that the protagonist of Fatman is the chief pagan “deity” who acknowledged the power of the true God when knowledge of Him came to northern Europe — and signed up to help with a certain difficult yet necessary seasonal job. And in the process, enforce the morality of the Law, if not spread the Gospel.

Several scenes at the end, showcasing the new-look Chris, support this analysis. Seen in this light — as paganism put at the service of Christianity — Fatman, with all its violence, can be enjoyed for what it is, rather than excoriated for what it’s not. Gibson’s Chris Kringle might not be the Santa we want, but as Western Christian society slouches back toward paganism — maybe he’s the Santa we need.