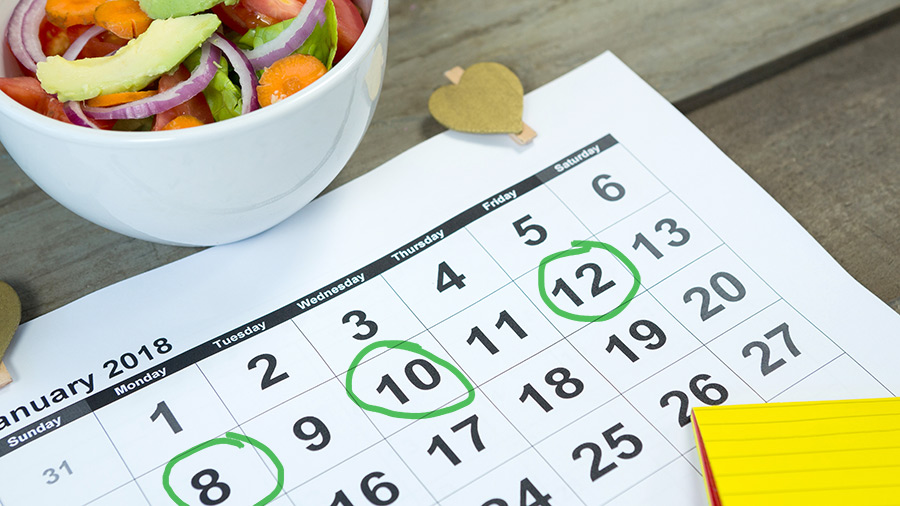 This is the twelfth piece in a series on how to develop a fasting lifestyle. Read the entire series here.

In the last two weeks, we introduced time-restricted eating and intermittent fasting. If you’ve kept up, you did three 23-hour fasts last week, and then ate one big meal at the end of the day. If you’ve never fasted before, that probably seemed daunting. But if your body is adapting, these fasts were a lot easier than you would have guessed.

You’ve also had one mini-feast day per week.

This week will be just like last week, with one tiny tweak: You won’t eat much on your three fasting days.

The One Day Fasting Mimicking Diet

Like last week, pick three non-consecutive fast days. On these days, you’ll fast from food for 23 hours of the day and then eat small amounts of keto-friendly foods during one hour in the evening. This isn’t quite a full day fast. It’s a one-day “fasting mimicking diet” combined with the alternate-day fasting that we introduced last week.

This is the first week when you’ll need to keep an eye on your calories. You don’t want to eat more than 500 calories on fasting days.

What should you eat? The simplest thing is just to eat two avocadoes with salt and lime juice. You can eat the slices or make guacamole with them. We add a lot of fresh garlic and some pico de gallo. Avocadoes are high in fat, and almost all their carbs are fiber, so they do a nice job of filling your stomach.

Another option: Take bone broth (which is mostly protein) and boil it with lots of cabbage, celery, and spices. This does a good job of filling up your otherwise empty stomach.

My choice: guacamole made with one avocado and a few bowls of the bone broth veggie soup.

Days two, four, and six, are just like last week. Eat the keto-friendly foods you need in the right proportion over an eight-to-ten-hour period. As before, eat until you’re satisfied — not stuffed. Then stop.

On the seventh day, have another mini-feast. Eat throughout the day. Perhaps have a roll with less refined flour and a big dollop of butter. Or a handful of corn chips. Finish off dinner with some low-glycemic fruit, such as half of a red grapefruit, a handful of berries, a slice of watermelon, or an apple. Perhaps a piece of very dark chocolate. If you like treats with artificial sweeteners, this is the day to indulge.

Remember, this is a mini-feast. These treats are options. Just choose one or two.

Also, eat such treats on a full stomach, so they will have less impact on your blood glucose and insulin. You’re still adapting to fat burning, so you don’t want to kick yourself out of that mode too soon.

As before, drink lots of water every day and keep up your intake of electrolytes (sodium, magnesium, potassium).

How Can I Tell If I’m Really Adapting?

There are a few ways to verify that your body is really adapting to fat-burning. I haven’t mentioned these tools until now because they cost money and aren’t essential. But if you’re like me, you may want to confirm that the strategy is working.

What you want to know is whether your blood sugar is staying on the low side of normal and your body is burning fat (or rather ketones) for fuel.

The easiest and cheapest tool to test for ketones are urine strips. (A box of 150 strips need cost no more than ten dollars. Here’s one of the many options.) You just pee in a cup, dip the business side of the strip in your urine, wait forty seconds, and look at the color change. If the tip stays tan, that means you’re excreting hardly any ketones. Light pink means there are trace amounts. Mauve to purple means there are plenty of ketones in your urine. If you’ve just been at this for a few weeks and are following the protocols, the strip should change color. But this method has its limits. The strips detect only one of the three ketones your body produces, called acetoacetate. And it doesn’t detect the ones you’re using, but rather the ones that you’re excreting through your urine.

As your body becomes more “ketoadapted,” it gets better at using ketones for fuel. That means that your urine may show fewer and fewer ketones the longer you eat a ketogenic diet. But to see what’s happening for the first month or so, urine ketone strips are still the easiest choice.

If you want to detect ketones and glucose in your blood, you’ll need to get a blood testing meter. I use the DSS Precision Xtra by Abbott. The kit comes with a digital detector and a little thingy that you use to prick your finger. You’ll also need to buy glucose test strips and ketone test strips. If you buy the meter kit, 30 glucose and 30 ketone strips, it will cost you about a hundred dollars.

Costs would get out of hand quickly if you did these tests every day. The ketone strips cost over a dollar a piece! But there’s no need to do test that often. For now, you just want to know if you’re producing ketones and lowering your blood sugar. I recommend doing the same test every few days, or once a week, at a fixed time. Just remember to compare apples with apples. Blood ketones and glucose go up and down throughout the day. Don’t compare a test you took right after you had a giant meal at 9 pm, with a test you took first thing in the morning on an empty stomach.

The blood ketone test tells you the concentration of beta-hydroxybutyrate (BHB) in your blood. That’s the ketone body that you’re brain really likes to run on.

So, What Should I Look For?

If you’re in ketosis, the meter should give you a reading of at least 0.5 mmol/L. (Don’t worry about the units. Just look at the number.) Ideally, you’d like to see it between 1 and 3 mmol/L sometime during the day. If you take the test at different times and get readings larger than 1, you’re fine. If you never get a reading of even 0.5, that means you’re not getting into ketosis. The likely culprits? Too many carbs, and possibly too much protein. (See here and here for more on this and other problems.)

“Normal” blood sugar levels for non-diabetics is 70 to 100 mg/dL. It will be lower when you’re fasting, and higher after you’ve had a meal. The main thing to check for now is whether both your fasted and fed glucose levels go down as you become more keto-adapted and fit for fasting.

If you’re healthy and you’ve been on a ketogenic diet for a couple of months, your blood sugar may go well below the normal range. Mine often do so. That’s okay as long as your body is using ketones for fuel.

Things can get more complicated long term (see here) when blood sugar can be higher in the morning than you might expect, but don’t worry about that now. Just stick with the basics. (If you really want to dive into the details, read this.)

Even if you do blood and urine tests, you’ll still have more time on your hands this week. Don’t waste it. Use the extra hours to lock in new spiritual disciplines. Become more aware of your prayer habits on fasting days. Use the time not only to talk to God. Do what Mike Pence does: Sit silently and listen for the voice of God.

Here’s the good news: By the end of this fourth week, you will have what it takes to benefit from all day fasts. And more.

Jay Richards is the Executive Editor of The Stream and an Assistant Research Professor in
the Busch School of Business and Economics at The Catholic University of America. Follow him on Twitter.