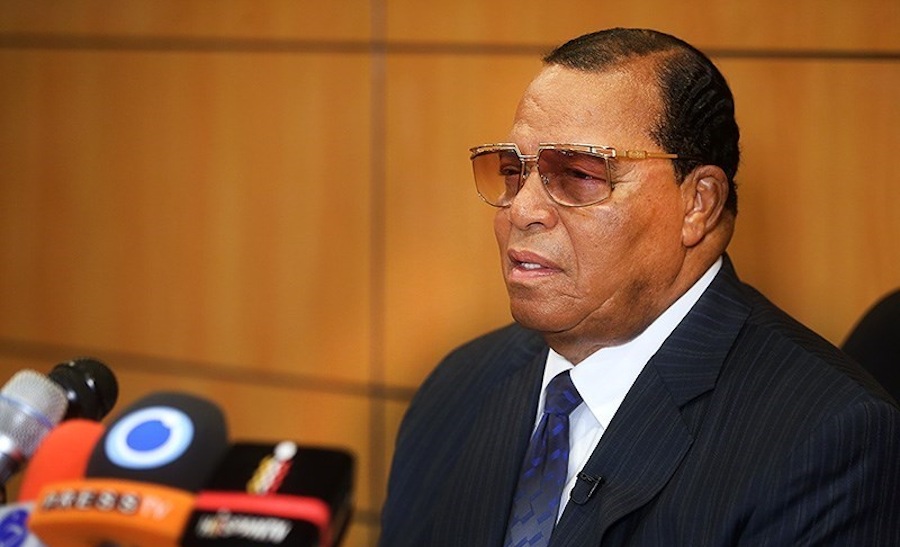 It was shocking to read that the new Fox affiliate, Fox Soul, would even consider allowing the minister of hate, Louis Farrakhan, to air his “Message to America” on our Independence Day. Farrakhan is well known as an anti-Semite and racist (back when there was a different understanding of racism). And because of that, an online uproar convinced Fox Soul to change its plans. But in case the issue ever resurfaces, there is another reason no one may have considered why Fox Soul should not broadcast Louis Farrakhan.

In an era in which all are expected to bow to the mantra Black Lives Matter, it should be remembered that to Louis Farrakhan, the lives of tens of thousands of black African Southern Sudanese did not matter.

In the mid to late 1990’s Farrakhan consistently denied the enslavement of Southern Sudanese as a weapon of jihad by Arab Islamists in Khartoum. He dismissed the idea as an attack against Islam, “all anti-Islam propaganda.”

I demonstrated with Southern Sudanese and American friends in front of the Embassy of Sudan dozens and dozens of times. In the mid 1990’s our DC-based coalition, The Sudan Campaign, began to shine a spotlight on the evil of Sudan slavery. We worked with Christian Solidarity International (CSI) that has rescued tens of thousands of people out of slavery. And we worked with the abolitionist activists of the American Anti-Slavery Group (AASG). 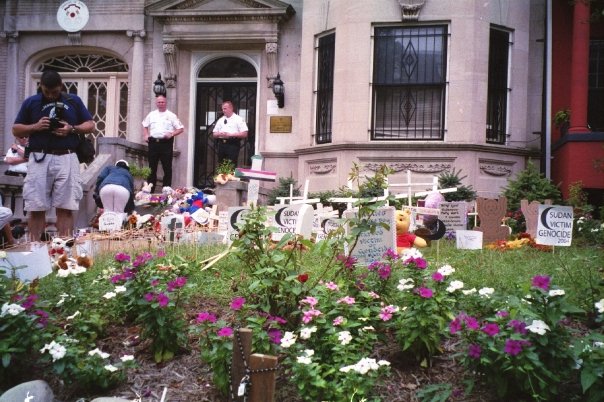 Faith McDonnell participated in demonstrations at the Embassy of Sudan in the early 2000’s.

When we marched, the Embassy would send out their emissaries, djellaba- and kufi-clad men who whined loudly, “There is no slavery in Sudan!” It really annoyed them when we educated young people on this issue, like the day we marched with dozens of high school students from Sidwell Friends School. Even more so when the AASG facilitated the trip of Harvard sophomore Jay Williams to Sudan, where he participated in the redemption of 4400 enslaved people in one week! Harvard’s website seems to have lost that article, so thank God for Internet Archive.

We all needed to be educated. The genocidal war against Southern Sudan and other marginalized regions left over 2.5 million people dead and some 5 million displaced from their homes. The Khartoum regime bombed and burned villages, destroyed crops and starved civilians. Civilians paid the biggest price since Khartoum could not win in ground combat against the brave Southern Sudanese and their allies from the Nuba Mountains in the Sudan People’s Liberation Army (SPLA). And besides, killing civilians “cleared the ground” for oil exploration.

One especially egregious human rights violation used by Sudan in its quest to create a pure Arab Islamist Caliphate was the resurrection of the slave trade.

The Khartoum regime used Arab militias (murahaleen) as proxies working with the armed forces. These militias raided South Sudanese villages in such places as Bahr Al Ghazal, a majority Dinka ethnic group area, as well as Sudan’s Nuba Mountains, both places where most of the men were off fighting against Khartoum with the SPLA.

Defenseless women and children would be taken in slave raids. They would be raped, beaten and branded. Those who survived long enough were brought north and sold in slave markets. Some were transported across country borders and sold in the Middle East and North Africa as house slaves, sex slaves and as camel jockeys.

Their favorite ally in the U.S. was Louis Farrakhan, because he could snooker tens of thousands of African Americans in the Nation of Islam into believing that the racist, jihadist regime of Sudan was their friend.

The Embassy was not pleased that chattel slavery in Sudan was no longer a secret regardless of all the efforts by the United Nations to help them hide it. But their favorite ally in the U.S. was Louis Farrakhan, because he could snooker tens of thousands of African Americans in the Nation of Islam into believing that the racist, jihadist regime of Sudan was their friend.

In early 1996 during his so-called “triumphal tour of the Muslim world,” Farrakhan visited Sudan, as well as Libya, Iran, and Iraq. New York Times journalist Steven A. Holmes wrote on March 26, 1996, “In the Sudan, he was quoted by the government-owned news service as saying, ‘more than 40 million American Muslims stand with Sudan.’” Farrakhan denied that there was slavery.

For several years in the 90’s and early 00’s, the late human rights activist and journalist Nat Hentoff wrote passionately about that slavery denied by Farrakhan and others. Among other places, Hentoff’s opinion editorials found their way into The Washington Post, which had not yet completely lost its honor.

Hentoff told many true stories. He told how at a news conference Farrakhan, who had paid five friendly visits to Sudan in the past ten years, challenged anyone who didn’t believe him to go and find slaves for themselves in Sudan. Watch him on the video!

And told how the Baltimore Sun took Farrakhan up on that challenge. They sent two reporters, Gilbert A. Lethwaite and Gregory Kane, to Sudan, where they participated in the redemption of two slaves and wrote a Pulitzer Prize-nominated (should have received it) story about their experience.

Farrakhan continued to defend the Khartoum regime, even when Congress held hearings on the subject. U.S. Representative the late Donald Payne, D-NJ, and Senator Sam Brownback sponsored companion resolutions condemning slavery in Sudan. He defended it when students across America, beginning with teacher Barbara Vogel’s fifth grade class from Highline Community School in Aurora, CO, began raising money to redeem Sudanese children out of slavery, a scenario that was dramatized on Touched By An Angel soon after.

It may be that there was more to Farrakhan’s attitude towards slavery in Sudan than just being cozy with Sudan’s former president and indicted war criminal Omar al Bashir and the late Prime Minister and chief Islamist, Hassan al Turabi. Even more than just defending Islam — although connected.

Another explanation for Farrakhan’s lack of concern for the black African Sudanese being enslaved was revealed in an article by South Sudanese American, Sabit Alley, in a now defunct black newspaper, The City Sun. The breathtakingly offensive explanation comes at the conclusion of Alley’s article:

Clearly, therefore, Louis Farrakhan seems to be playing an instrumental role in the scheme to annihilate and enslave the people of South Sudan, the Nuba Mountains, and the Ingessina Hills. This should not, however, surprise anyone, for all of us should have known by now that Minister Farrakhan loathes Southern Sudanese. This was clearly demonstrated during his Saviours’ Day address on February 25, 1996, in Chicago and in subsequent speeches, where the Minister graphically described the people of South Sudan as being very, very, very, very … very dark with kinky hair, as compared to the brown (white!) Northern Arabs, who, according to Farrakhan, looked exactly like him! He used the adverb very 15 times to emphasize his color prejudice against the Southern Sudanese.

Fox Soul may not know the same word in Arabic abid means both “black” and “slave.” But it’s pretty certain that Farrakhan did. That man’s lack of compassion and of desire to stop the enslavement of those very, very, very black Southern Sudanese, those abid, was of great concern to all of us who were in involved in The Sudan Campaign’s abolition movement — black and white, Sudanese and American. And it should concern everyone who condemns racism today.

Faith J.H. McDonnell directs the Institute on Religion and Democracy’s Religious Liberty Program and Church Alliance for a New Sudan and is the author of Girl Soldier: A Story of Hope for Northern Uganda’s Children (Chosen Books, 2007).