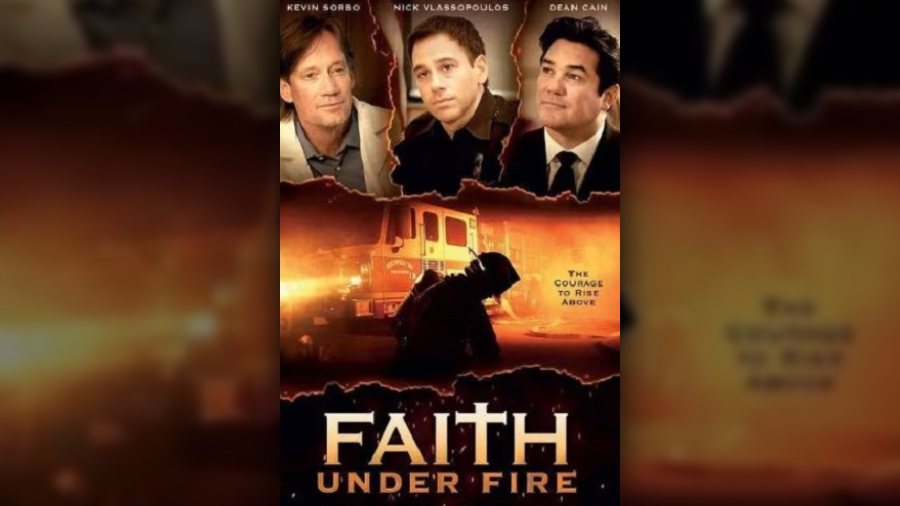 “The love of God is always around,” actor Nick Vlassopoulos told The Stream. God sends “people to you to help you get through grief.” A new faith-based film starring Nick, Kevin Sorbo (Hercules) and Dean Cain (Lois & Clark: The New Adventures of Superman) will be released to theaters November 27. The movie, Faith Under Fire, follows a man through loss and grief as he struggles to understand why God doesn’t step in and change his situation. The film isn’t a feel-good movie. But it does offer hope for those who’ve suffered loss.

Nick delivers a strong and quite emotional performance as fireman Tom Hatcher, a man who lost his wife to illness and found out that his daughter was ill as well. Nick said the role was “like an actor’s dream come true.” He always wanted to do a role as intense as Hatcher’s. As soon as he heard about the film, he called the producers. “I straight out said, ‘I want to play the role of Tom.’” He auditioned and snagged the part.

Kevin Sorbo plays Dr. Robinson, a kind and gentle doctor who offers to pray for Hatcher. He treats Hatcher’s wife and daughter in the hospital.

Dean Cain plays a preacher, Dan Underwood, who’s unlikely friendship with Hatcher helps the grieving man reach out for help in the face of incredible loss.

Nick resonated with the message of the movie and the loss Hatcher suffered. Nick’s own father passed away just a few short years ago. “I think everybody goes through at some point in their life — grief, loss, ‘why me?’ questioning — you know, why somebody dies at a young age unexpectedly. We all want to live to 90 and just die of old age, you know? And, unfortunately, it doesn’t work that way in the real world.”

The movie offers no quick solutions to the pain Hatcher endures. But it does offer hope. “It [is] a great story. It [is] inspirational,” said Nick. The story of loss, hope and “turning to God really drew me to it as well.”

Nick wants people to take away hope from watching the film. When his father died, he had love and support from friends and family. “That’s when I realized the love of God is always around. He’s sending those people to help you get through this grief. … The scars will still be there, but at least you feel there’s some hope to continue to move on with your life.” He added, “Time will help you heal, but the support of people and your loved ones — I think they’re sent [by] God to help you get through that grief and those times.”

Faith Under Fire will be in theaters November 27 through December 1. It will be available through home entertainment platforms beginning December 8.