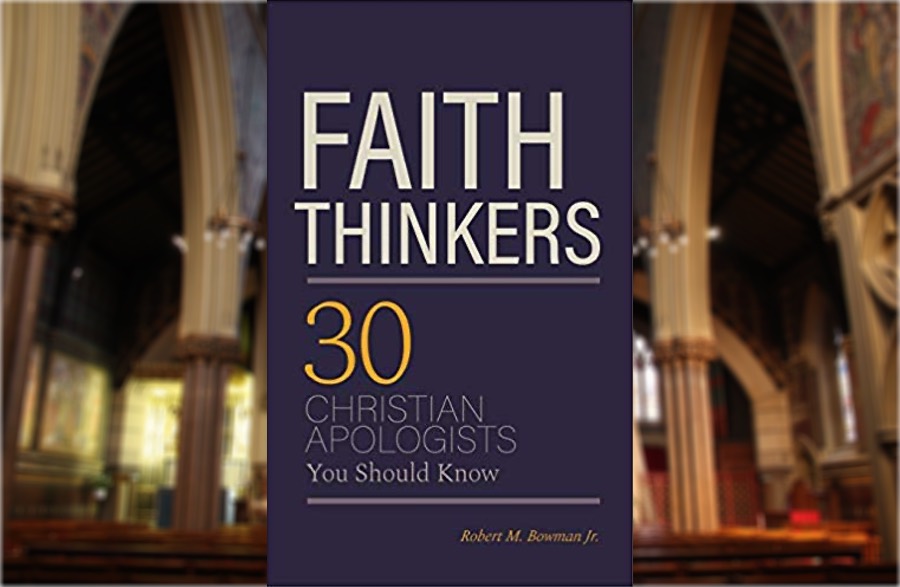 Atheists’ challenges against Christianity have a dreary triumphalism to them. Often they comes across as, “There! Gotcha! I’ll bet you’ve never thought of that one before!” In fact, there’s hardly a charge they hurl that hasn’t already been sent repeatedly — and answered repeatedly — since the beginning.

It isn’t just atheists, though. We believers also know too little of our intellectual heritage. For many Protestants it’s as if nothing happened in Christian thought between the Apostle Paul and Martin Luther. Too many of the most well informed, even, would be hard pressed to name any thinker before C.S. Lewis who gave good answers to atheist objections. That lack of awareness makes us vulnerable to the “gotchas.”

And this, to my mind, is what makes Robert Bowman’s Faith Thinkers: 30 Christian Apologists You Should Know such a gem of a book. It’s just about perfect, in many ways, especially for Protestants. It’s the right length for an introduction — nice and short. It covers territory we should all know, both the thinkers and their works. There’s plenty of follow-up reading suggested, so the reader will see where to go next, once his or her appetite is whetted. In fact, that might be the book’s greatest virtue: It’s just the right amount to make you thirsty for more.

“Apologists” are thinkers who specialize (to some degree at least) in helping us know why we can be confident in Christianity’s truth. Bowman introduces thirty apologists, going back to the very beginning. He starts with Luke, author of the Gospel of that name as well as the book of Acts. He moves on to Justin Martyr, who — but wait; I’d better not go any further until I explain that these really are just introductions.

Each of the thirty apologists gets four pages, including a list of writings you can read to follow up with them. So if even the thought of a second-century writer named Justin Martyr seems foreign, or if a third-century thinker named Origen seems daunting, Bowman has done you a favor by keeping the package very manageable.

Back to Justin Martyr. Much of his work was devoted to explaining what Christians really believe, to a culture that kept getting it wrong. Sound familiar? Origen wrote a lengthy point-by-point rebuttal to a skeptic named Celsus. “Whereas the second-century apologists had pleaded for imperial toleration for Christianity, Origen pleaded for intellectual respect for Christianity.”

(I’ve read some Origen, and it’s amazing how much it feels like a time-warp version of debating atheists online today. As I said, we’ve been answering the same challenges since the beginning.)

As for “intellectual respect,” Bowman goes next to Augustine and his City of God, “rightly regarded as one of the five or ten most important books in the history of Western thought.” Soon after he covers Thomas Aquinas, who is far better known among Catholics than Protestants — which is unfortunate for Protestants. “To describe Thomas Aquinas as a towering intellect in the history of Christian thought,” says Bowman, “is something of an understatement.”

The list continues, half from before the 20th century and half since then, focusing on Protestant thinkers from John Calvin onward. Some of the more familiar thinkers, for today’s readers, will include C.S. Lewis, Francis Schaeffer, William Lane Craig, and Lee Strobel.

Growing as Faith Thinkers Ourselves

Bowman also includes Alvin Plantinga, who may be the most important living Christian thinker you’ve never heard of. In the 1960s he launched a revival of Christian thinking that’s still going strong decades later. Between one-quarter and one-third of philosophy professors in America today are believers. Plantinga is largely responsible for that. Did you know that? See why an introduction like this could be helpful?

“Becoming acquainted with many of the greatest Christian thinkers of the past two thousand years can help us all to develop into better faith thinkers ourselves,” says Bowman.

He’s right. It isn’t only about being ready for the “gotchas,” though that’s part of it. It’s also about developing confidence in Christianity’s intellectual heritage; understanding Christian discipleship from a much larger, better-rounded perspective. It’s about loving the Lord with our minds.