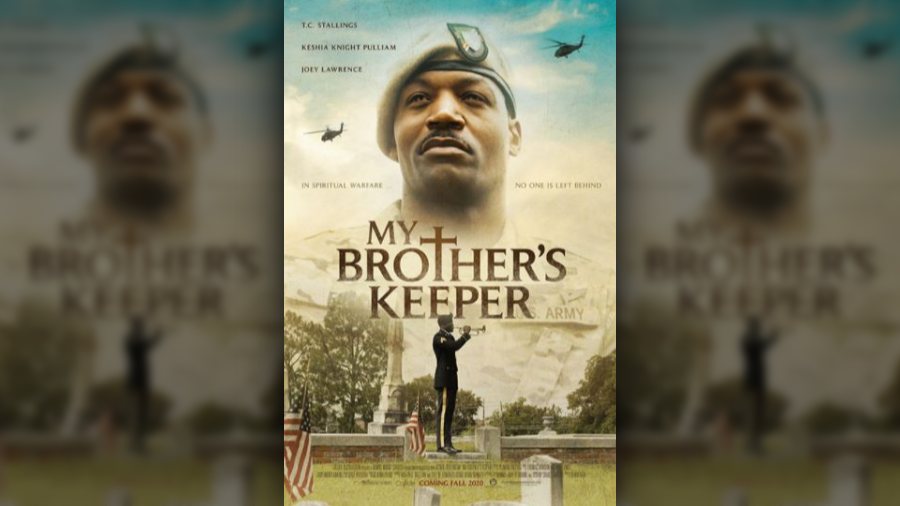 Film writer and director Ty Manns’ father had Post-Traumatic Stress Disorder when he came home from the Vietnam War. Only back then they didn’t call it PTSD. They called it being shell shocked. It wasn’t until after the elder Manns found Jesus that he was able to work through it and became a fun person to be around.

Manns’ latest film, My Brother’s Keeper, starring T.C. Stallings (War Room), is based in part on what he experienced as a child. “The outbursts that you see in My Brother’s Keeper were lifted straight from those outbursts we saw as kids,” Manns told The Stream. Stallings’ character deals with PTSD — among many other issues — following his time in the military. The film will be in theaters early February 2021.

The faith-based film has a solid cast with actors like Keisha Knight Pulliam (The Cosby Show), Gregory Alan Williams (Remember the Titans), Joey Lawrence (Blossom) and Stallings. Manns told The Stream that Stallings was always going to be the lead. “That role was always written for him to play. … I just saw him in it.”

Even though Stallings’ character, SFC Travis Fox, struggles with PTSD, Manns said the film is not an indictment on the Army or on physicians or others who are doing their best to help those who struggle with PTSD. He hopes audiences will get that PTSD is real, and that one need not be in the military to suffer from it. If someone is struggling with it, Manns said there’s a church door that will open to them. “Somebody inside that church will talk to you. That could help you get started on the path to save your life.”

PTSD is “a topic I’m glad the movie addresses,” Stallings tells The Stream, “because it’s rampant in our country and our world. It’s talked about a bit, but maybe not as much as I think it should be.” He added that it’s not just veterans who suffer with it.

A Lot of Layers

In addition to PTSD, Stallings’ character deals with his faith, his trusting of others, his relationships and forgiveness. “So, there’s a lot of layers to the guy. To get a chance to just peel all of that back for the audience — very, very challenging.” Stallings didn’t have a military background or a history of PTSD to draw from, so he did a lot of research on those subjects. Other emotions in the film were easier to tackle — like fear, confusion or danger. “You just pull that out in your mind at that moment (of acting) and you pull all that together and hopefully it’s a believable portrayal.”

The film doesn’t end “all squeaky clean, but it ends with hope, it ends with knowing what [his character’s] future will be like.” Fox’s source of peace is Christ. “God has no limits,” Stallings reiterated. “There’s nothing that you can’t take to Him.”