Faded Orange Rain Boots: How One Gift Set a Man on a Path to Help Children in Need 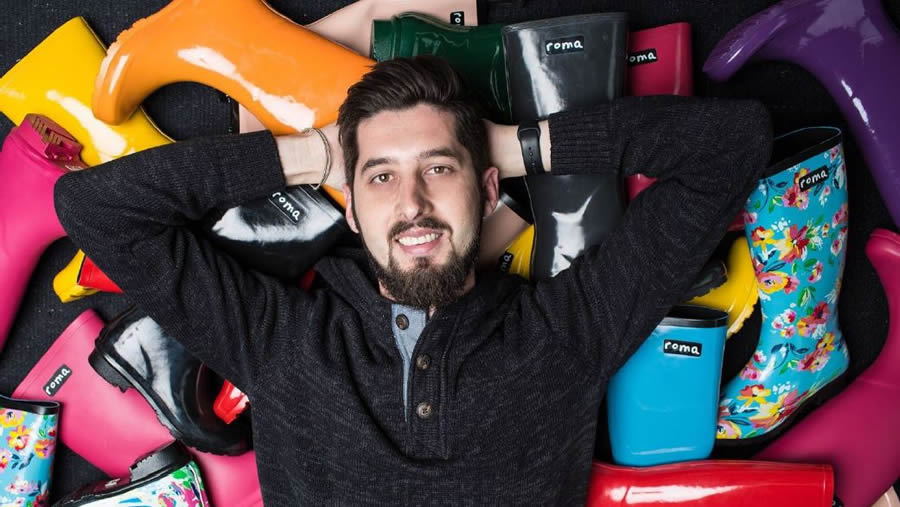 A pair of faded orange rain boots started it all. Samuel Bistrian was six years old when he got them from his older siblings. They brought him much joy. Because of those boots, Samuel was able to weather the brutal Romanian winters that brought mud and slush to Transylvania.

He was among the poorest of the poor. They didn’t have running water or electricity. He never knew that one day he’d be bringing rain boots to needy children all over the world.

When he was 8, his family came to the U.S. It was around Thanksgiving, 1990. After landing at O’Hare, the lights of the season mesmerized him. He went into an Aldi grocery store and saw groceries everywhere and brightly colored candy wrapping paper. But the lights. “I keep saying lights,” he told The Stream, “because that’s one thing I remember as a kid.” It contrasted with his memories of a gloomy, dark, morose, communist town. “Gray, that’s what [I] can remember, dark gray and somber.”

Samuel’s family, which included 12 kids and two adults, moved into a two-bedroom apartment in Chicago. It wasn’t pleasant. His parents didn’t like the fast-paced lifestyle of the big city and eventually moved the family to Knoxville, Tennessee. They ended up in government housing — the kind with bars on the windows and doors. He and his siblings cut their feet on broken glass in the yard by bottles of 40 smashed against their house by guys who were up to no good. Dumpster fires were a constant. Any food their mom planted would be smashed by kids in the neighborhood.

“It was difficult.” But, he adds, “there was beauty living in a project.”

The beauty he saw came from families who volunteered at a nearby community center. They spent time with the local kids who didn’t have much. The families “invested” in them. One year, they asked Samuel and his siblings to make a wish list for Christmas. He asked for a sleeping bag and a remote-controlled car. That Christmas Eve a white van showed up loaded with gifts, including a sleeping bag and a remote-controlled car.

Later on, one of those families introduced Samuel’s family to Habitat for Humanity. His family qualified for a house. “I would say that really was a new chapter in our life in the U.S., to finally have our own home, where my mom got chickens and goats and planted trees. That was beautiful.”

A Heart for Missions

After he graduated from high school, Samuel attended Christ for the Nations Bible School and Dallas Baptist University. He wanted to practice what he’d learned, so he joined Youth With A Mission and began doing mission work in South America and Cuba, which reminded him of his home country of Romania.

He wondered if there was a way to combine his love of business with missions and philanthropy. But for the time, he returned to Dallas and began working for Neiman Marcus. He worked his way up to management. It struck him that he was selling $40,000 to $50,000 coats to Dallas socialites. He didn’t feel like he was living up to his potential.

Each summer Samuel would travel to Romania and Colombia doing missions work. He kept wishing that he could do missions full time. “Going to Romania or Columbia and seeing so much need, I wished I could do what I felt in my heart when I was in Cuba, Panama, Columbia. Now here I am, eight years later, at Neiman Marcus.”

He soon realized his time at Neiman Marcus served a purpose.

While at Neiman’s, Samuel met the founder of Toms shoe company, Blake Mycoskie. It was September 2009. For each pair of Toms shoes sold, the company donates a pair to kids in need. Sam asked him, “Why don’t you make rain boots for kids living in cold and wet climates?” The company wasn’t ready to. It focused on Argentina and Africa.

Samuel thought, “Why don’t you do it, Sam?” Even concerns about funding in the middle of a recession didn’t stop him. “I wanted to do something meaningful.” He felt in his spirit he should make the boots for those kids who needed them most. In the spring of 2010, on his 28th birthday, Samuel started Roma Boots. “I just felt like it was divinely engineered.”

But it wasn’t easy. He borrowed money from siblings. He sold his car. He pawned things. He ate a lot of cheerios with milk. His electricity was cut off. “I thought to myself, ‘Wow, what did I do?'” He kept pushing forward, a little at a time. The experiment thrived and by 2014, he was able to dedicate all of his time to Roma Boots. In 2014, Roma sold 100,000 pairs of boots. In 2015, Samuel launched Roma boots at Nordstrom’s.

But his first love was missions. He returned to Romania, where his sister opened an orphanage. “When we pulled up into that village, it was like a war zone. Buildings were broken. It was deep snow and slush on the ground. … It was just so gray and gloomy. … And it was just so depressive thinking to myself, it’s Christmas season, there’s no lights, no music. There’s nothing indicating that it’s Christmas.”

It was almost like reliving his own childhood when he pulled up in a white van filled with Christmas gifts of red, yellow and blue glossy rain boots, which were the colors of the Romanian flag.” He continued: “We just gave them out to these kids. And I’m telling you, we brought Christmas. All the sudden, the whole village, just became so full of life and happiness and joy. … I still have pictures. When I look at those pictures, I’m like, wow, little did I know that that experience will be repeated over and over, over the next 10 years in other villages around the world.”

Recently, Samuel started a group called “Awaken Dallas.” It’s a prayer group for “people who believe in the power of prayer and want to pray for our city” based on 2 Chronicles 7:14: “If my people, who are called by my name, will humble themselves and pray and seek my face and turn from their wicked ways, then I will hear from heaven, and I will forgive their sin and will heal their land.”

The group has been meeting for a few weeks and launched officially on July 14th. “[I]t’s been great and we’ll continue to do so because we want people to wake up awaken from their sleep and realize that the days are wicked. And we must redeem the time and walk as children of light.”

He’s grateful that his family had the opportunity to come to America. “I’m happy, I’m humbled. I’m grateful for the experience. You know, I’m grateful for a country like the U.S. that allows me that opportunity, you know, that I wouldn’t have had anywhere else.” People in today’s culture don’t quite understand how good they have it in this country. “We cannot be asleep anymore,” he explains. “We have to realize that if the light gets put out in this country, then there’s no hope for the rest of the world.”

Give Poverty the Boot

His faith has been the “anchor” for everything he does. He recognized that social justice is impossible without Jesus. “You cannot create justice if you don’t have love behind it. When there’s something that is wrong in the world, and we try to repair it without God, it only creates more problems.” For Samuel, the motivation behind Roma Boots has always been love. “I kept going back to love. I want to help those in need. I want to love God and my neighbor.”

He is reminded that Jesus said the poor would always be with us. However, he believes the mindset of poverty, of victimhood, can be eradicated. “I grew up so poor. I mean, we were in Chicago, sleeping five to a bed, then living in the projects, I grew up so poor and I didn’t let that define me. I said, ‘I want to be able to do something with my life.’ And I did. And it took a step of faith.”