Biden whips out his pen ... and admits failure. 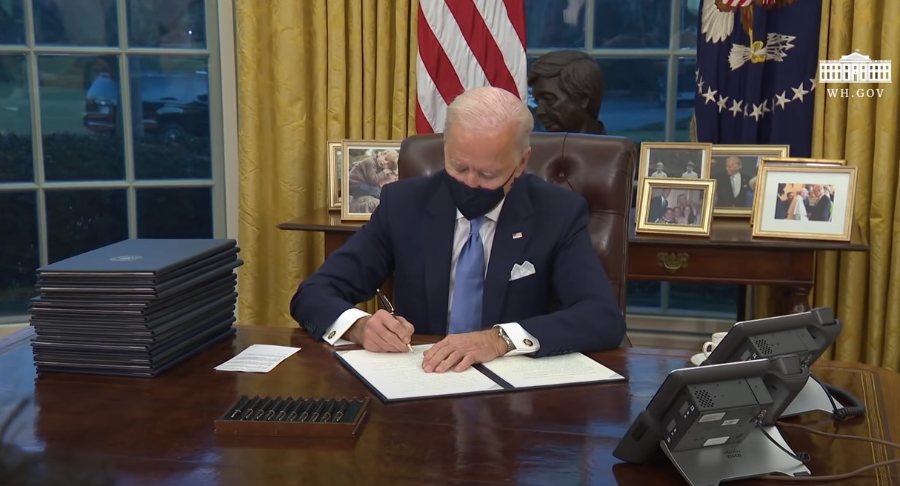 In Greek mythology, Sisyphus is the cunning and deceitful king of Corinth condemned in the afterlife to repeatedly roll a great stone up an incline, only to see it roll back to its starting place just before reaching the top. This classical picture of futility well describes government by executive order.

The hallmark of the American republic is that we are a nation of laws — duly enacted by representatives of the people. We see this in the very configuration of our capital city, where the great dome of the U.S. Capitol Building — the seat of our law-making — occupies the geographic center of the city. This preeminent placement reminds us that legitimate government requires the consent of the people.

Government by executive order is instead a systemic failure of the American ideal. It denies government of, by, and for the people. It lacks legitimacy. It accomplishes little of lasting benefit or significance — as one administration’s executive orders are easily overturned by the next.

In the end, excessive and overreaching executive orders are a denial of the consent of the governed, a usurpation of authority not granted to the president, and in some cases a tyrannical breach of the separation of powers.

As such, the Biden administration’s current Sisyphean flurry of executive orders can only be seen as a rank admission of leadership failure — of an inability to build a governing consensus. What’s remarkable here is President Biden’s demonstrable unwillingness to even try.

By contrast, President Obama labored earnestly to enact a legislative agenda. When his efforts bore little fruit —even with Democrat control of the House and Senate — only then did he retreat to the fevered swamps of government attempted by fiat.

There is of course a proper role for executive orders in directing the administration of the executive branch. This is an implied power, as the Constitution directs that the president “shall take care that the laws be faithfully executed.” Every president since George Washington has issued some form of executive order. Washington’s first order directed the heads of all executive branch departments to submit reports detailing their operations. In his two terms, President Washington issued a total of eight executive orders — a rather penurious achievement compared to Franklin Roosevelt’s record of 3,728.

When challenged to defend the law-making nature of some of his executive orders President Biden confusedly responds: “I am not making new law, I am eliminating bad policy.” Legitimate policies, of course, are those enacted by law and implemented by appropriately developed regulations — by which both legislation and regulation provide for input from the general public. Even The New York Times editorial board, with an offering entitled: “Ease Up on the Executive Actions, Joe,” felt compelled to remind Biden about constitutional limitations that seem to have escaped his notice:

This is no way to make law … These directives [are] a flawed substitute for legislation. They are intended to provide guidance to the government and need to work within the discretion granted the executive by existing law or the Constitution.

All of this stands in stark contrast to Candidate Biden who promised to work to achieve consensus. Speaking at an ABC-sponsored town hall just weeks before the election, Mr. Biden said:

I got to get the votes. That’s why — you know, the one thing that I — I have this strange notion. We are a democracy. Some of my Republican friends, and some of my Democratic friends even, occasionally say: ‘Well, if you can’t get the votes, by executive order you are going to do something.’ [There are] things you can’t do by executive order, unless you’re a dictator. We’re a democracy. We need consensus.

Setting aside the President’s rusty understanding of civics (America is a constitutional republic, not a democracy), nary a whiff of consensus can be found in his threats to pack the Supreme Court and to eliminate the Senate filibuster. Instead we have this festival of fiats — a unilateral approach to public policy-making that is just about the most undemocratic scheme imaginable. This frightfully early admission of a profound inability to build consensus does not bode well for the Biden Administration — nor for a nation governed by law enacted by representatives of the people.

In the end, excessive and overreaching executive orders are a denial of the consent of the governed, a usurpation of authority not granted to the president, and in some cases a tyrannical breach of the separation of powers. They also are an admission of failure.