America is Suffering Thousands of Excess Deaths. Could Fear of Hospitals Explain It? 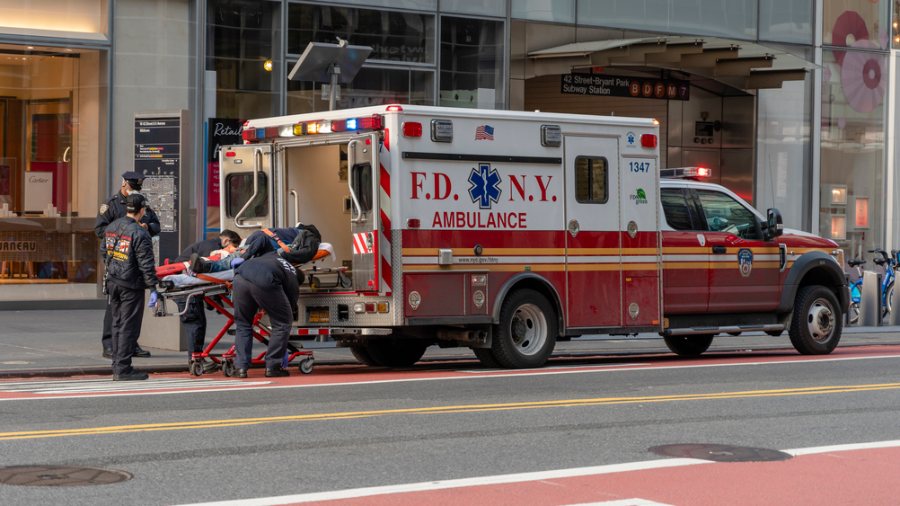 Manhattan, New York, USA - April 6, 2020: Paramedics loading a patient into the ambulance on 42 Street in Midtown Manhattan deserted because of the COVID-19 outbreak.

The trouble in accurately tracking COVID-19 deaths is well-reported. Testing shortages and lags in reporting make it hard to know what the death toll really is. Now another mystery is revealing itself as more data becomes available: the number of excess deaths across the United States.

New analysis of federal data shows a spike in U.S. deaths throughout March and early April. Not all are clearly related to COVID-19. Some postulate that we have been severely undercounting the number of COVID-19 deaths. Others believe the excess deaths are indirect outcomes of the pandemic. For instance, people with health emergencies may be avoiding ERs because they’re afraid of contracting the virus.

Excess deaths refer to the number of deaths above what is typical for a particular season, based on previous data.

Analysis published by the Yale School of Public Health shows that the U.S. recorded an estimated 15,400 excess deaths between the beginning of March and April 4. This time frame covered the early weeks of the pandemic. At the time, the U.S. was still grappling with the initial onslaught of the virus, and states were deciding what restrictions to enact. The paper, which has not been peer-reviewed, suggests uncounted COVID deaths account for some of that spike.

“In many countries, insufficient testing is a major obstacle to understanding the scale of the pandemic,” The Washington Post notes. That’s certainly been the case here. Testing shortages in the beginning meant that around the nation, only people displaying clear symptoms of COVID-19, or those in the most vulnerable demographics, were being tested. Now, testing capacity is “headed in the right direction,” said Dr. Anthony Fauci. But some states are still having trouble getting the tests they need.

Fear a Barrier to Treatment

The excess deaths could be related to the pandemic, but not directly caused by COVID-19. According to news reports, health care workers have noticed decrease in the number of patients with non-virus-related illnesses.

An April 19 report in The Washington Post acknowledged a “silent sub-epidemic of people who need care at hospitals but dare not come in.” That includes people with dire conditions, like heart attacks.

A recent report from The Oregonian reveals a similar trend in the state. The state’s data show excess deaths through mid-March and early April. “Fewer than half the excess deaths were officially connected to coronavirus,” the article notes. State data also revealed that the majority of excess deaths took place in homes. Dr. Jennifer Vines, a public health officer in the Portland area, told the paper there was “no reason to think we are missing large numbers of deaths due to COVID-19,” at least not in Oregon.

“To what extent are people suffering from lack of ability to access the healthcare system?” wondered Dr. John Townes of Oregon Health and Science University.

A Gallup poll conducted between March 28-April 2 found 42 percent of Americans “very concerned” about contracting COVID-19 in a doctor’s office or hospital.

A Lot is Still Unknown

Contrary to experts who estimate an undercount in COVID-19 deaths, some people argue that we’re actually over-counting. There’s evidence that hospitals are counting as COVID deaths people who died from other causes while infected with the virus. That’s been a point of confusion and controversy, especially for those who fear government and public health officials are overstating the severity of the disease.

It’s unlikely we’ll know for sure the full effects of this pandemic on American health for some time. As data collection continues, we’ll get a better picture of how many people died because of COVID-19 — by direct infection or domino effect.