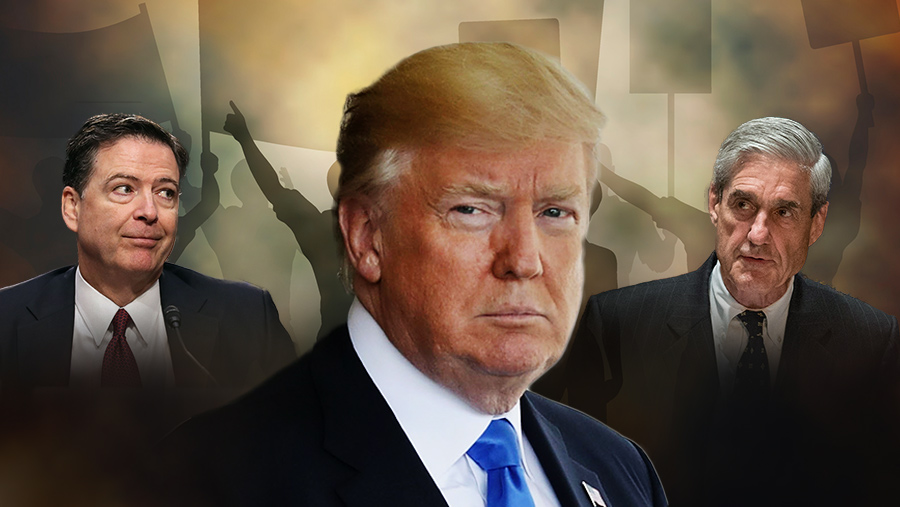 “Allegations that the American president has been compromised by the Kremlin, which may even have helped to put him in the White House — is the worst and (considering the lack of actual evidence) most fraudulent political scandal in American history.”

Sean Hannity? Dan Bongino? Devin Nunes? No. That’s liberal writer Stephen F. Cohen in the progressive magazine The Nation. Cohen is encouraging Attorney General William Barr’s investigation into the origins of Russia Hoax. And he is blasting those who continue to perpetuate it. “Whether out of political ambition or impassioned faith, the damage wrought by these Russiagaters continues to mount, with no end in sight.”

Mueller’s most damning line against [Trump] was based on an inversion of a basic legal principle. Rather than determining whether or not Trump committed a crime, Mueller, in both his report and in his public statement, framed the issue around whether or not the evidence exonerates him of one. “If we had had confidence that the president clearly did not commit a crime, we would have said so,” Mueller said last week. But given that the US justice system is supposed to grant everyone the presumption of innocence, Mueller was under no obligation — and in fact, had no mandate — to clear Trump of a crime. His job was only to decide whether or not to accuse Trump of committing one.

Mate mocked how so much of the Democrats collusion argument still rests on Don Jr.’s Trump Tower meeting and candidate Trump’s jest about asking the Russians for Hillary’s emails. “If some of the most damaging evidence against the Trump campaign comes via a fake private offer and a public joke, it is difficult to see how seriously we can take the demands to hold them to account.”

“But what about obstruction of justice?!” the Left will scream. Mate argues Mueller’s prosecutors “cumulatively undermine the case for it.” And “If Mueller believed that Trump was guilty of obstruction, he could have said so, and then let the Justice Department decide how to proceed.”

Hearty cheers to Mate and Cohen for having the honesty to recognize the hollow shell of the effort to impeach and for wanting to know how this whole intelligence operation and disinformation campaign against Trump began.

If only more of their liberal media brethren would be so honest.

On the very day President Trump was at Normandy representing America at the D-Day 75th anniversary, Politico targeted him with more “obstruction” flak.

Renato Mariotti laid out how Trump could be prosecuted for obstruction of justice after leaving the White House. The primary vulnerability for Trump, he claims? That Trump wanted to fire Mueller. Yes. Wanting to do something is now a crime. Well, boys, convict me for theft because I wanna heist a box of hot glazed from Krispy Kreme.

Weeks earlier, [former White House counsel Don] McGahn advised Trump … that “knocking out Mueller” would be “another fact used to claim obstruction of justice.” When your lawyer tells you that doing something could be a crime and you do it anyway, that is extremely strong evidence of your criminal intent — “substantial” evidence, in Mueller’s own words.

“Used to claim” obstruction is not “obstruction.” If claim of a crime equals a crime Trump would be on Death Row several times over.

Here’s what makes this obstruction argument by Mariotti, et al, even more fanciful. Democrats wouldn’t even know about the Trump-McGahn conversations if Trump had not allowed his former lawyer to testify before the Special Counsel. He could have claimed executive privilege, attorney-client privilege on all of it. But Trump let McGahn and his inner circle talk … and talk … and talk. Anything Mueller wanted to know.

Then what is President Obama stating Hillary should not be charged, though crimes did happen, because she did not “intend” to damage national security? By Mariotti’s definition, this is obstruction on steroids.

You can hear the cry already, “Why do you always have to mention Obama and Hillary when the subject is Trump?” It’s not simply because of the obvious double standard the media applies. More crucially, because Barack Obama and Hillary Clinton are central to the Trump Russia story. Even the wrapping up of the Hillary Clinton investigation is tied directly to Trump, as Lisa Page made clear.

And by the day — heck, by the hour — more is revealed. We’ll have the latest shortly.

Welcome to Slitherado, Where They Rig the Game, Then Accuse You of Cheatin’