The evidence for ETs is still quite thin. But even if ETs showed up, Christians have no reason to fear a crisis of faith. 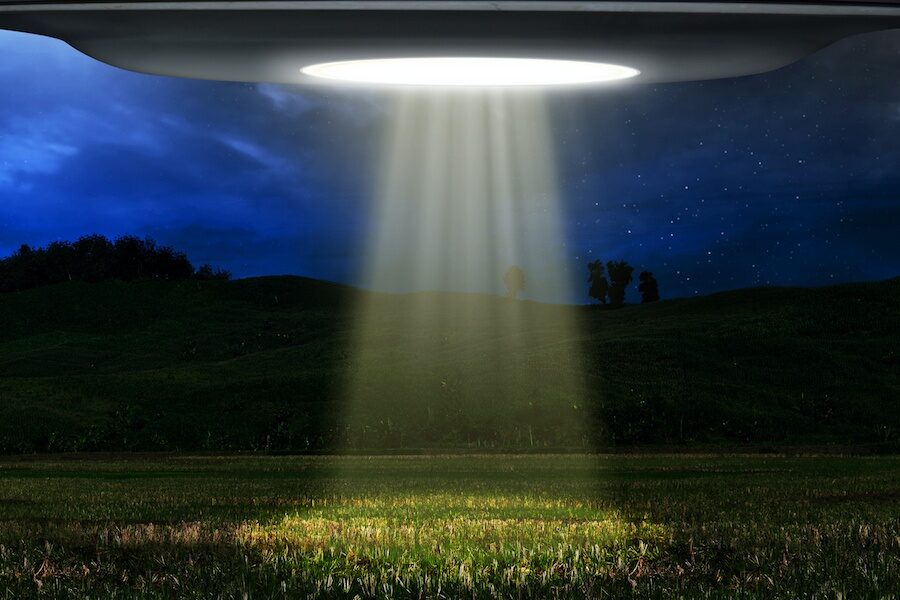 It’s hard to miss the media buzz around UFOs. Or, as the Pentagon has rebranded them: Unidentified Aerial Phenomena, UAPs. These include admissions by the Pentagon that they still investigate UFOs. Add to this the official confirmation that leaks of Navy video footage of UAPs are genuine. The buzz is also louder than usual because of the promised delivery to Congress this month of a Pentagon report on UAPs.

Could this latest wave of UFO/UAP reports by credible sources be the “smoking gun” evidence that ETs are visiting our planet? Based on the video footage released so far, probably not.

Skeptics have done simple analyses on the Navy videos that were first released in 2017 (and then re-released in April 2020). I find some of the online videos by debunker Mick West compelling. Contrary to some claims, the Navy jet footage doesn’t reveal aircraft performing maneuvers that violate the laws of physics. More mundane explanations, like weather balloons, other jets, and camera jerky motions and other sensor/processing artifacts are all we need to invoke here.

Still, all this does raise interesting questions: What would count as convincing evidence of ETs? Do ETs exist, even if they haven’t visited earth? And what would contact with ETs mean for Christianity?

When someone says that he has discovered something that violates the laws of physics, you should ask, “Has the Nobel Prize committee contacted you yet?” After all, a real violation of the (known) laws of physics would be a huge scientific advancement. That happened 102 years ago. On May 29, 1919, Arthur Eddington made the solar eclipse observations that would later be shown to violate Newton’s laws of physics and confirm Einstein’s shiny new General Relativity physics. It was also about that time that scientists discovered light can behave like particles and particles like waves. There are other such examples. This is how science works.

However, it’s quite different to claim you’ve seen something, without careful controls or quantification, that violates the laws of physics, and then invoke some hyper-speculative theory, like an ET visit from a distant star system. In that case, the safe bet is to assume that the UFO sighting has some mundane explanation. Only if you could exclude all the kinds of systematic errors from your instruments could you be justified in invoking ETs.

“OK,” you might respond, “we should be careful about chucking the laws of physics, but what if ETs are using technology far more advanced than ours?” This is a better approach. Sure, today’s aircraft can achieve far greater feats than the aircraft of a century ago. Still, if you brought someone from 1921 to the present, they would recognize the basic airplane shape as well as the need to have some source of thrust. And the basic principle of lift produced by wing shape would still be in effect. “They” might be the Russian military or alpha Centaurians, but we would surely recognize aspects of their technology. If you want to choose between these two, you will need to determine just how recognizable their technology is. We might be dealing with advanced technology from another country, not from aliens.

Let’s assume, though, for the sake of argument, that ETs exist and are visiting Earth. In that case, we can assume that since they can travel vast distances, they know how to hide well. That means real sightings of ET craft would be overwhelmed by the false positives — unidentified bird flocks, conventional aircraft, advanced military equipment, and other natural events. To prove authentic ET spacecraft, we should demand very strong evidence from multiple types of sensors and witnesses — not just sketchy video.

At the moment, we haven’t seen any evidence like that. And the lack of such evidence is itself a problem. In a conversation about ETs in 1950, physicist Enrico Fermi asked a simple question, “Where are they?” That is, if the galaxy really is filled with other intelligent life, some much older than we are, why is there no good public evidence that they exist?

This “Fermi Paradox” is even more compelling today. Despite many searches and interplanetary missions, we have yet to find any life anywhere but Earth. Indeed, we now know of over 4000 exo-planets orbiting nearby stars, following the first discovery in 1995. If there were ETs in the galaxy, we would have been far more likely to find them today than in 1950.

There’s another, less well-known aspect of exo-planet research: theoretical studies on the habitability of exoplanets. These don’t get the attention the searches do, perhaps because they tend to show that the conditions needed to build a life-friendly planet are far narrower than previously believed.

Research on exo-planets is also showing just how unusual our Solar System is. This sharpens the point of the Fermi Paradox. If the Solar System is one of those rare habitable systems, then Galactic colonizers would almost certainly not pass over it. In other words, the fact that there’s no strong evidence of ETs isn’t just absence of evidence. It’s evidence of absence.

But again, let’s suppose that the Pentagon releases rock-solid evidence of ETs. Some claim that such “first contact” will mean the end of Christianity. After all, aren’t we supposed to be the pinnacle of creation? Didn’t Christ die once for all? Didn’t sin enter the world through man? How could Christ’s work apply to non-human intelligent beings?

Scholars have been considering the question of other worlds at least since the time of Thomas Aquinas in the 13th century.

Good questions. But it doesn’t follow that there are no good Christian answers to them. In fact, scholars have been considering them at least since the time of Thomas Aquinas in the 13th century. More recently, C.S. Lewis thought about ETs and salvation. He was open to the possibility of ETs not requiring salvation in the same way we do. Or, perhaps ETs are not fallen, as we are. In “Dogma and the Universe,” Lewis wrote, “We know that God has visited and redeemed His people, and that tells us just as much about the general character of the creation as a dose given to one sick hen on a big farm tells it about the general character of farming in England.”

While we could imagine some discovery that could challenge Christianity’s unique claims (the faith is in principle falsifiable), the blanket claim that finding ETs would destroy Christianity is simply not true. The fact that so many materialists want to believe in ETs need not trouble us. After all, we don’t know all of God’s purposes. He could create a universe in which intelligent life is common, or one in which life is rare.

In the debate over UFO’s and ETs, then, the Christian should feel confident in keeping an open mind, while saying, “Show me the evidence.”