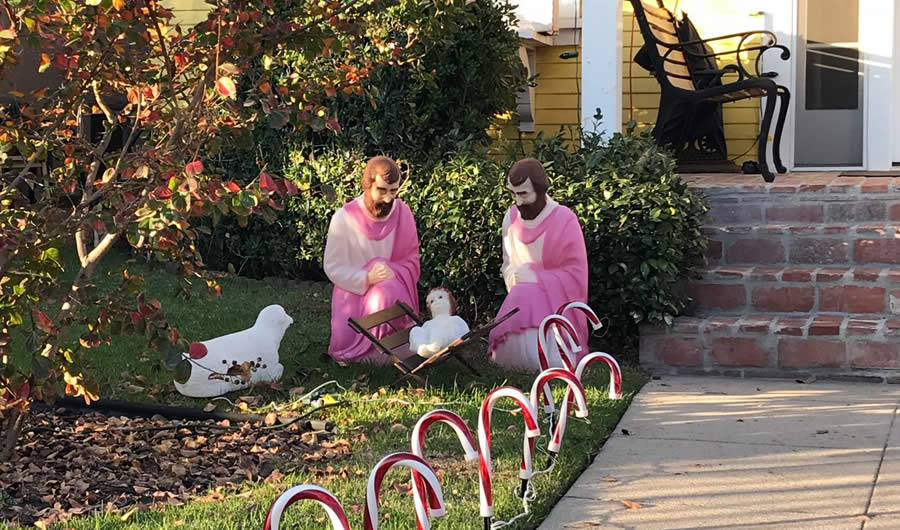 By Jennifer Hartline Published on December 6, 2017 •

Social media was buzzing last week with the photo of a gay nativity scene in the front yard of a home in California. Two pink Josephs kneel by the baby Jesus. Many people shared the photo with gushing words of praise and fawning admiration.

I have a few different words. Mostly just one: demonic. Not merely misguided and wrong, but a perverse lie from the pit of hell.

No one has any right to create a perverted image of the Holy Family. This isn’t a fictional story that’s open to reinterpretation.

You don’t get to erase Mary from the Holy Family. You’re not being progressive and you’re not being tolerant or loving. You’re rewriting God’s final Word.

Replacing Mary with another Joseph is mocking God. It’s saying: “Hey God, I’m going to recreate your family the way I want it, to affirm my sexual passions and preferences. I’ll make it reflect my desired reality.”

This gay nativity isn’t loving or inclusive. On the contrary, it’s quite unloving and exclusive, and not only to the Virgin Mother of God. By excluding Mary, woman has been excluded. Erased from the picture. No mother needed. Only a “gestational carrier” who is hired for her services and then dismissed after delivery. She is needed for parts, manufacture and labor, but nothing more.

What could be more insulting to women? Why would any feminist stand for it? Why are the women praising this gay nativity so content to see Mary deleted from the scene? Why would any woman be happy to have her role as a mother dismissed as unnecessary?

The Holy Family isn’t a fictional story that’s open to revision. The Incarnation of Jesus Christ, the second Person of the Blessed Trinity, in the womb of the Blessed Virgin Mary, and His birth are sacred and historical events in the human timeline.

God spoke His final Word in the miracle of the Incarnation. Christ, in all His divinity and glory, humbled Himself to take on human flesh, and began His human life within Mary’s womb. All because Mary said yes.

God could have decided that Jesus would simply descend to Earth a full-grown man and fulfill His mission that way, but He chose otherwise. Even Jesus would be born into a family. Christ was not taken in by two men, or two women, but was born into the family of Joseph and Mary.

God sends us a very clear message in this. He considers the human family sacred and essential. And the elements of the family as He established it are unchangeable: father and mother are both required. Husband and wife form the foundation on which the family is built and children are properly welcomed.

Same-sex “marriage” remakes the human family against God’s plan. It eliminates either mother or father to satisfy disordered sexual preferences.

Same-sex “marriage” remakes the human family against God’s plan. It eliminates either mother or father to satisfy disordered sexual preferences. It denies the child his or her inherent right to both parents. It serves the desires of the adults, but casts off the needs of the child.

It sets up a false image of the family as equal in every way to God’s design. That’s Lucifer’s only trick. He can’t make anything. He can’t do anything new. All he can do is mock, pervert and try to destroy what God has made.

A Display of Deception

I can’t see into the hearts of the folks who put that blasphemous gay nativity on their lawn. I cannot judge them, but I can judge what they have done. The essence of their little scene is demonic.

What greater family to mock than the Holy Family? What greater woman to dismiss and erase than the Mother of God? How better to spit upon the reverence and mystical meaning of marriage than to scorn the most pure marriage of Joseph and Mary?

Yes, Satan is surely quite pleased to see this little stunt and bask in all the applause it has received. They are deceived fools who cheer this display as something worthy and happy. It is offensive and condemnable.

May God forgive such blasphemy against His family.