A declining church sees a light at the end of the tunnel in its new leader, but problems persist.

Amid pomp and pageantry, the Episcopal Church installed its 27th leader, Presiding Bishop Michael Curry, at a service in Washington, D.C.’s National Cathedral on Sunday. Much like the earthquake-damaged gothic cathedral itself, the denomination has been shaken in recent years by membership loss and property feuds that seem destined to drag on in the courts for years. 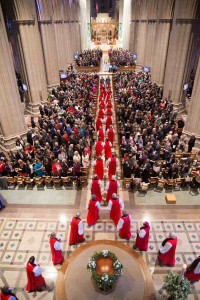 As the first person of African-American descent to be elected to lead the denomination (whose membership is 87 percent white) Curry is a first for the denomination, succeeding its first female presiding bishop, Katharine Jefferts Schori. Curry’s record of supporting liberal changes to the church’s teachings on marriage and sexuality is in line with Jefferts Schori’s own views, likely continuing tensions between the Episcopal Church and the worldwide Anglican Communion’s growing and biblically-minded global south. But Curry also embraces evangelical language about relationship with Jesus and affirms his literal bodily resurrection, something that his predecessor has spoken of only in vague terms.

In his Sunday sermon, Curry portrayed a gospel centered upon what people do for God and others, rather than what God accomplished through Jesus Christ. This action-centered message is what Curry refers to as “The Jesus Movement”:

The reason the movement was turning the world upside down was because members of the movement gave their loyalty to someone named Jesus and committed themselves to living and witnessing to his way above all else.

Episcopalians seem genuinely enthusiastic about Curry: He was chosen in a landslide on the first ballot during the church’s General Convention this summer, a first for any Presiding Bishop of the Episcopal Church.

Curry’s unabashed cheerleading is welcome in a church that is struggling. The denomination has long been riven by disputes about the authority of scripture and the identity of Jesus Christ, but a 2003 consecration of an openly partnered homosexual man, Bishop Gene Robinson of New Hampshire, hastened an exodus of traditionalists from the old-line church. Numbers recently released from the church’s Office of Research show that the Episcopal Church has lost more than 20 percent of its membership and 27 percent of its attendance since 2003, shedding nearly 50,000 members in 2014 alone. The denomination has also paid out in excess of $42 million dollars to attorneys still litigating against departing congregations and dioceses. 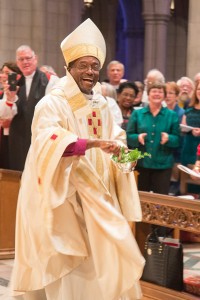 “My brothers and sisters, God has not given up on the world, and God is not finished with The Episcopal Church yet,” Curry preached during his sermon at the National Cathedral. “We are the Jesus movement. So don’t worry, be happy!”

Shortly after his summertime election, Curry was asked about the church’s litigation strategy against departing Anglicans, responding that he was “supportive of our Presiding Bishop and the policies of our church,” but allowed that he was unfamiliar with the details of ongoing court cases.

“I am committed to the work of reconciliation that is a part of our Gospel mandate,” the Presiding Bishop-elect announced in July. On Sunday, Curry noted in his sermon that “the Spirit has done evangelism and reconciliation work through us before,” adding that “the Spirit of God can do it again, in new ways, now beyond the doors of our church buildings, out in the world.”

Curry shares many of Jefferts Schori’s liberal views, having embraced the blessing of same-sex unions in his North Carolina Diocese in 2004 and closely identifying with the “Moral Mondays” political protests against the conservative direction of North Carolina’s state government. Curry also concurred with Jefferts Schori’s statement endorsing the Supreme Court ruling on same-sex marriage.

“In a time when there is often debate and genuine consternation as to whether courageous, effective leadership is even possible anymore, let the record show that The Episcopal Church has had a leader in Katharine Jefferts Schori,” Curry praised on Sunday. But there were signs that the church would still face many of the same issues that presented themselves under her time in office.

Jefferts Schori’s time of leadership witnessed increased division between Episcopalians and overseas Anglicans: many are in a state of “impaired communion” with the U.S.-based church, while others cut off relations entirely.

At the installation ceremony only six overseas provinces (out of 37) sent their top bishops (known as primates in Anglican lingo) to attend: Canada, Korea, West Indies, Southern Africa, Brazil and the Philippines.

Concerns about syncretism in the U.S.-based church (showcased in a 2006 Time magazine interview in which Jefferts Schori claimed that saying Jesus Christ was the only way to salvation was “to put God in an awfully small box”) also remain fresh. Those concerns won’t be disappearing anytime soon: Sunday’s ceremony included an interfaith prayer led by an official from the Islamic Society of North America (ISNA). Mohamed Elsanousi, who holds a Bachelor’s degree in Shariah from the International Islamic University in Pakistan, prayed, “Help us to understand what You have told us in Your Holy Quran” at the ceremony, with the congregation affirming “amen” at the conclusion of the prayer. Nevermind that Christians do not regard the Quran as Holy Scripture, or that Muslims do not consider Jesus Christ the son of God, or even acknowledge his death on the cross. These were all deemed as trivialities to sweep aside in favor of interfaith hand-holding.

Curry’s first test after taking office will be a gathering of the Anglican Communion’s top bishops, or primates, in England this January. Summoned by Archbishop of Canterbury Justin Welby, the primates have been promised no agenda except that which they set themselves — virtually guaranteeing a clash between Curry’s allies and global south leaders. Welby believes he can preserve some element of the worldwide communion, but Curry is unlikely to reverse course and repair the damage caused by the Episcopal Church’s actions.

While Curry has characterized himself as “a follower of Jesus,” just what kind of Jesus he follows is still an open question. Much like repairs on the National Cathedral, damage that was inflicted so quickly will take much longer to heal.