Taylor Miller felt helpless as a mom of a sick newborn. Then she realized there was something she could do. 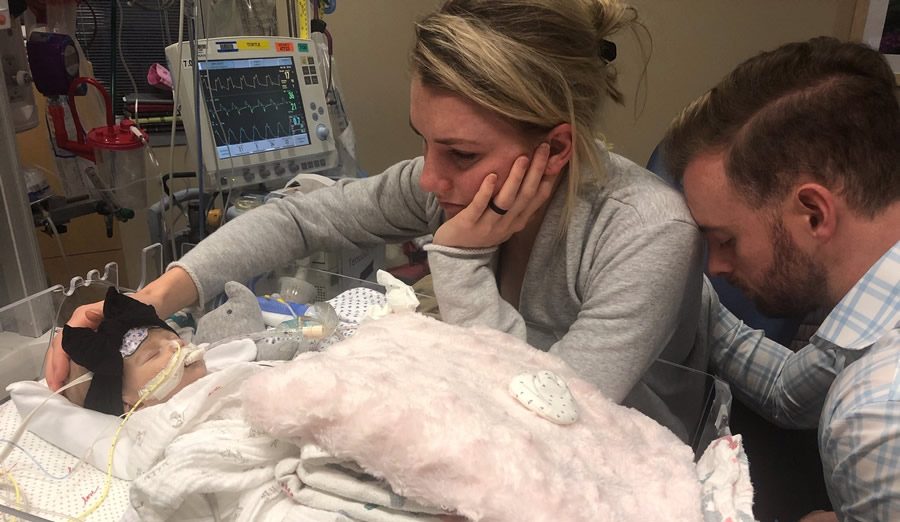 “I don’t think we realized quite how critical her condition was.” Taylor Miller spoke softly about her newborn daughter, Ella. Although Taylor’s pregnancy was textbook, doctors told her at 18 weeks gestation that her daughter had only half of a heart. “In hindsight, I look back and think, ‘Oh my gosh, she only had half of a heart.’ Of course she was extremely sick, like very critical condition,” Taylor told The Stream. Even so, Ella’s life was filled with purpose and provided a remarkable gift to other newborn babies.

Taylor and her husband, Brandt, had hope for Ella’s future. “We knew that it was going to be a very, very long road — a road that would never get easy, and so a lifetime of, you know, essentially complications, but we were hopeful that she was going to eventually be okay.”

But she wasn’t okay. Ella was diagnosed with hypoplastic left heart syndrome — a rare congenital heart defect in which the left side of the heart doesn’t form properly. Ella was put on medications immediately. She also had IV nutrition.

Taylor began pumping milk for the day when Ella was well enough to take it by feeding tube. She felt helpless as a mother. “I couldn’t hold her, I couldn’t make her feel better, I couldn’t do anything. What I could do [was] pump and I could store milk and have it ready for her.” So she did.

Ella didn’t get better, even after undergoing surgeries to help the heart function. In late September, Ella passed away in the hospital. She was one month old.

When everything around Taylor was failing, though, her body didn’t fail her. She had an abundant milk supply. For Taylor, pumping milk was her way of not being able to let go. But she also knew that other babies could benefit from having breast milk. “I knew that I was not going to throw that away. I was going to donate that, no matter what,” she explained. “As much as I wanted Ella to be able to eat so badly and get that nutrition, I knew there’s other moms that wished the same thing who can’t produce the milk for their babies.”

Taylor continued to pump milk for six weeks after Ella passed away. In total, Taylor donated 2,138 ounces of breast milk to a milk bank. The milk bank services 130 hospitals and an additional 15-20 babies at home.

“I think every life has a purpose and even hers. It was short and it was sad,” Taylor said. “She was extremely sick and she went through a lot in her short time here. But, you know, it brought a lot of good, too. … Ella’s inspired a lot of people and she certainly inspired me. And I’m just really grateful for that.” Some people told Taylor that after watching Ella go through what she did, they turned their lives back to Christ. “[W]e didn’t lose faith and we haven’t lost faith and we won’t. And I think that was just inspiring to some people and I think that that was part of Ella’s purpose.”

She says although she and her husband are devastated, they’re at peace. “We’re just thankful that we have the promise that one day we’ll be reunited in heaven and we look forward to that day.”

Through the donation and Ella’s life, Taylor hopes to bring glory to God. “Even in the midst of devastation and grief, there is always hope and God is always good. And while not in the earthly ways that I so longed, God did heal Ella. She is made whole again in the arms of Jesus and free from pain and suffering. And because of Ella’s life, God is blessing other babies in need of healing too through [our] milk donation.”

The milk donation wasn’t just her gift, Taylor noted. “If it weren’t for Ella, I wouldn’t have ever had the milk that I had. And so I really feel like it was kind of her gift that I was able to give on her behalf.” Light is Featured in Darkness